Ohio, what Clinton really thinks of Sanders supporters, and voting in Texas

Ohio, the state I thought would be the most interesting to watch in this cycle, is turning out to be as stale as day-old white bread.  A very good account of the demographics of the Buckeyes and their impact on the 2016 election.

After decades as one of America’s most reliable political bellwethers, an inevitable presidential battleground that closely mirrored the mood and makeup of the country, Ohio is suddenly fading in importance this year.

Hillary Clinton has not been to the state since Labor Day, and her aides said Thursday that she would not be back until next week, after a monthlong absence, effectively acknowledging how difficult they think it will be to defeat Donald J. Trump here. Ohio has not fallen into step with the demographic changes transforming the United States, growing older, whiter and less educated than the nation at large.

And the two parties have made strikingly different wagers about how to win the White House in this election: Trump, the Republican nominee, is relying on a demographic coalition that, while well tailored for Ohio even in the state’s Democratic strongholds, leaves him vulnerable in the more diverse parts of the country where Clinton is spending most of her time.


Ohio missed the diversity train ... so they're taking the Trump one instead.

But its Rust Belt profile, Trump’s unyielding anti-trade campaign and Clinton’s difficulty energizing Ohio’s young voters have made it a lesser focus for Democrats this year, even as it remains critical to Trump’s path to the White House. As Clinton’s aides privately note, the demographic makeup of Florida, Colorado and North Carolina, which have a greater percentage of educated or nonwhite voters, makes those states more promising for Democrats in a contest in which the electorate is sorted along bright racial and economic lines.

And with a once-competitive Senate race in Ohio turning into a rout for Rob Portman, the Republican incumbent, Democrats can quietly pull back from the state with little fear of down-ballot consequences.


Clinton has recently surged back into the lead in Colorado, Pennsylvania, Virginia, Florida, and North Carolina ... but not in Ohio and Iowa.  One of the clearest reasons is that those two states remain overwhelmingly Caucasian.

But even some of the state’s proudest boosters acknowledge that Ohio, which is nearly 80 percent white, is decreasingly representative of contemporary America.

“Ohio, like a melting iceberg, has slowly been losing its status as the country’s bellwether,” said Michael F. Curtin, a Democratic state legislator and former Columbus Dispatch editor who is an author of the state’s authoritative “Ohio Politics Almanac.”

He continued: “It’s a slow melt. But we have not captured any appreciable Hispanic population, and there has been very little influx of an Asian population. When you look at the diversity of America 30 to 40 years ago, Ohio was a pretty close approximation of the country. It no longer is.”

“If the Republican Party looks more like the Trump coalition and the Democratic Party looks more like the Obama coalition, then the states Democrats must win will no longer be Ohio and Iowa (91% white in 2012),” said David Wilhelm, a manager of Bill Clinton’s first presidential campaign and a former Democratic national chairman who lives in suburban Columbus. “They will be Virginia, North Carolina, Arizona and Georgia.”


Much more there about how Republicans have a winner in fair trade -- as opposed to free trade -- if they can figure out how to leverage it into votes outside their white, rural, conservative caucus in all states, not just Ohio.  For the record: the cleaving of rank-and-file union membership who favor Trump and his populist and nativist rhetoric on trade and immigration, and the union leaders who continue to support the Democrats, is where the fault line lies.  Like the San Andreas, it's way overdue for a big split.

-- Here's what Hillary Clinton really thinks about the Sandernistas, on audiotape from behind closed fundraiser doors.

"There is a strain of, on the one hand, the kind of populist, nationalist, xenophobic, discriminatory kind of approach that we hear too much of from the Republican candidates," she said. "And on the other side, there’s just a deep desire to believe that we can have free college, free healthcare, that what we’ve done hasn’t gone far enough, and that we just need to, you know, go as far as, you know, Scandinavia, whatever that means, and half the people don’t know what that means, but it’s something that they deeply feel."

"Some are new to politics completely. They’re children of the Great Recession. And they are living in their parents’ basement," she said. "They feel they got their education and the jobs that are available to them are not at all what they envisioned for themselves. And they don’t see much of a future."

Clinton added: "If you’re feeling like you’re consigned to, you know, being a barista, or you know, some other job that doesn’t pay a lot, and doesn’t have some other ladder of opportunity attached to it, then the idea that maybe, just maybe, you could be part of a political revolution is pretty appealing."


Gonna be awfully difficult to blame the Russians for this.  Still feel like voting for her, millennials?  And Hillbots: still don't get why they don't?

Hillary Clinton does not support single-payer health care; Young voters do. Clinton is among the more hawkish members of the Democratic Party; Young voters are not. Clinton is a capitalist, and even within a capitalist party, she is in both perception and in practice unusually comfortable with capitalism’s worst practices. Millennials, by contrast, reject the entire economic system by a bare majority. They are no great fans of financial institutions or free trade.  This should not be surprising in a year when very few voters of any age group are particularly enthusiastic about their prospects.

I would like to suggest that the threat these young voters pose to technocratic liberalism is not the possibility of electing Donald Trump. Despite Clinton’s flagging numbers, her chances of success remain high. Rather, the fear is that if younger voters really are committed to a host of ideological positions at odds with the mainstream of the Democratic Party, then that Party, without a Trump-sized cudgel, is doomed. It should not escape anybody’s notice that politics by negative definition—the argument, at bottom, that “we’re better than those guys”—has become the dominant electoral strategy of the Democratic Party, and that despite the escalation of the “those guys” negatives, the mere promise to be preferable has yielded diminishing returns. At some point, the Democratic Party will either need to embrace a platform significantly to the left of their current orthodoxy, or they will lose.

There are only so many times one can insist that young voters capitulate to a political party’s sole demand—vote for us!—in exchange for nothing. 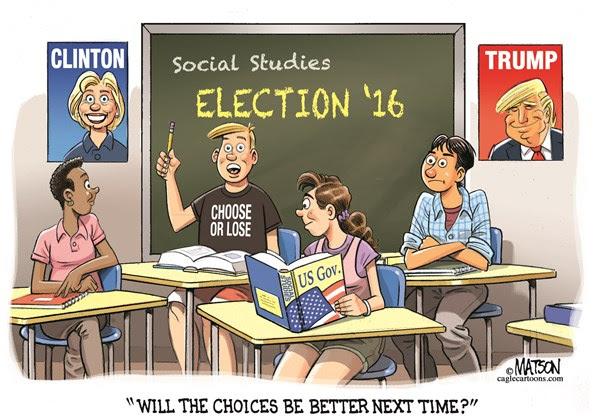 You actually have one pretty good choice left

Now would be a great time for millennials -- and every other generation, for that matter -- to vote Green in a non-swing state, of which there are at least forty.  You want better, more progressive Democrats?  Take my word: after ten years of working my ass off for that within the Democratic Party, the only way it will ever happen is without them.

-- Look who is on the ballot for more voters than Evan McMullin.  She's not on the Texas ballot, so you won't read much about her from Texas sources of information.   But you won't hear much about her at all anywhere, because she's, you know, an actual practicing socialist.

-- Speaking of ballots, you can find your sample one now if you live in Harris County.  We have one of the longest ballots in the nation, so start your research now and post a question in the comments about any specific race you may have.  I will have a P Slate post prior to the start of early voting, but may only touch lightly on downballot races due to various time constraints.

-- Speaking of early voting, it begins three weeks from Monday.  You still have ten days to register or change your address, if necessary; and remember that unless the SCOTUS grants some unexpected relief to Greg Abbott and Ken Paxton at the very last minute, you won't need your picture ID to vote.  But if you DO NOT have a photo ID, be prepared to sign an affidavit stating such and bring your voter registration card or something like your utility bill that verifies your address.  Just in case there are some Republicans acting like assholes.

Under no circumstances should you vote provisionally.  Step out of line and call the Texas Voter Suppression Hotline for assistance.
Posted by PDiddie at Saturday, October 01, 2016