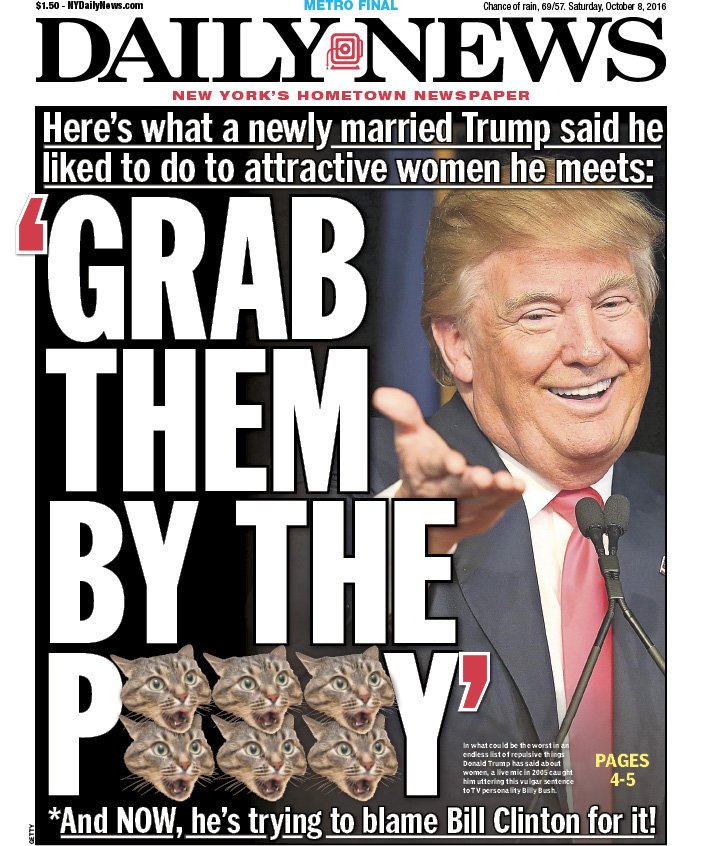 -- Paul Ryan canceled Trump's appearance at a campaign swing through Wisconsin the two were scheduled to make today.  Sen. Mike Lee of Utah took to Facebook Live to urge Trump to quit the race.  There were denouncements aplenty, but essentially nobody except Lee withdrawing their endorsement.  Update: there's a growing list of Republicans calling for him to drop out.  But of course he won't, and he can't anyway; voting is already happening in nearly two dozen states, including mail ballots like Texas and expats overseas.  The GOP is stuck with him, and the nightmare for downballot Republicans is real.

Update II: Both Vox and Rick Hasen outline some highly implausible scenarios -- Hasen calls them 'unlikely contingencies' -- whereby if Trump chose to drop out, the GOP could finagle the Electoral College representatives to be counted for both Trump and whoever might replace him.

Trump apologized on video, but more in defiance than in contrition, and promised he would strike back at Clinton using her husband's old track record.  That portends a lively yet revolting set-to for Sunday night's second debate.  Trump's polling continues to slide even before the impact of yesterday's sexist insults tape can be measured, which leads to more predictions falling in behind mine on Monday that Trump is finished.

Despite all of this, I still do not think he can lose Texas.

-- Meanwhile, Wikileaks released some of John Podesta's emails, which confirmed Hillary's shilling for Wall Street.  Still not quite the October Surprise her political opponents have been eagerly anticipating, though the RNC is seizing on it to distract themselves us from Trump's implosion.  We get another "it's the Russians" reaction from Democrats, and sputtering outrage from all the usual alt-right suspects, who have forced a "Bill Clinton is a rapist" Twitter hashtag to trend.  Some lay blame on the media, another predictable response.

-- All of this noise has drowned out the capture and subsequent release of several peace activists by the Israeli navy as they attempted to land at Gaza, the devastation wrought by Hurricane Matthew, the New Cold War with Putin and Russia, the hot proxy war we're fighting with them in Syria, more devastating climate change statistics, and a host of other things that are more important than Trump's sophomoric frat boy behavior or Clinton's latest email dump.  But at least it knocked Kim Kardashian's robbery back to the entertainment section.

-- In brighter news, Jill Stein is returning to Texas at the end of next week, with stops in El Paso, San Antonio, and Houston, at the Last Concert Cafe' on Saturday, October 15.  I'm delighted that she has long seen the Lone Star State as a tremendous growth opportunity for the Green Party.

It's not a protest vote, not a wasted vote.  It's an eviction notice.
Posted by PDiddie at Saturday, October 08, 2016