Captain Ahab Greg Abbott and his third mate Flask Ken "I Know Fraud" Paxton are hot on the scent of the elusive Moby Dick. 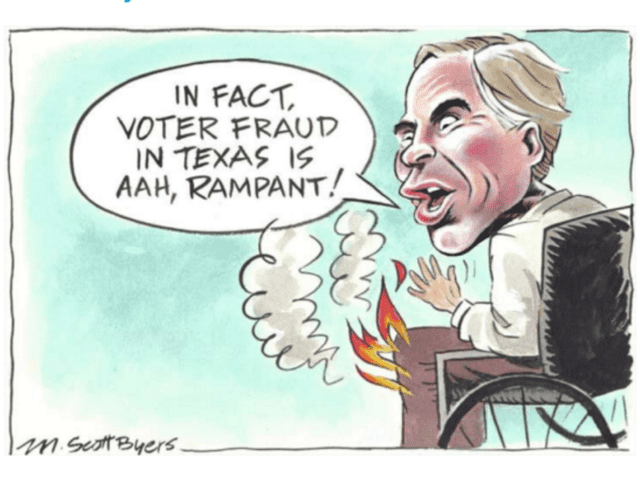 Less than a month before the Nov. 8 election, allegations of voter fraud in Tarrant County are under investigation by the state, prompting concern that the timing may intimidate some voters — and possibly lay groundwork for the Legislature to enact more restrictions on voting next year.

The complaints focus on mail-in ballots, which allow people to vote from their homes without any ID or verification of identity.

Supporters have long said mail-in balloting is crucial for overseas residents, the military and senior citizens. Critics maintain that such voting is ripe for abuse and raises concerns about “vote harvesting,” in which people could fill out and return other people’s ballots.

Some say the investigation is politically motivated; others say it’s addressing a practice that has been a problem for years.

"The Republicans have been looking for a blockbuster case to demonstrate that voter fraud isn’t just a series of small mistakes," said Brandon Rottinghaus, a political science professor at the University of Houston. "If some of these allegations turn out to be true, they may finally have their white whale."


Herman Melville thanks you, Professor Rottinghaus.

“Whether there is lawbreaking or not, the issue of voting is polarized and revelations this close to an election are bound to have an effect on Democratic Party and affiliated groups’ efforts to get out the vote. Voters may be hesitant to sign up for or vote through a mail-in ballot, let alone give it to someone else. This may reduce turnout in some heavily Democratic areas that utilize this process.”


There's a lot more, and also at the Dallas News if you like.  Abbott is really turned on about getting somebody under his wheels.


I'm just going to sit back and wait, as his witchhunts have typically come up dry.

If they have something, they'll show something.  If they don't have anything they'll still show something, even if it's the same old nothing.  I just can't get worked up this late in the cycle about the little boy in the wheelchair who constantly cries wolf.
Posted by PDiddie at Sunday, October 16, 2016