-- Harris County and Texas turnout continue to break records.  Marc Campos still doesn't know what's happening, so here's the breakdown for Harris County's five heaviest boxes, my guess as to how they lean, and from the SoS, Texas' fifteen-largest counties' turnout as of Wednesday.

Since we're just spitballing, I'd have to say that the Republicans in Harris County might not be in as much trouble as we've been portending. 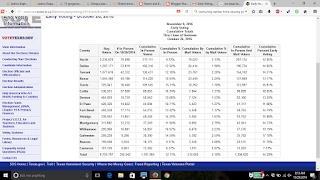 Click on it for a clearer picture or go here. Note that Harris County's turnout is 50 percent larger than second-place Dallas County.  This is why the emphasis on the state's largest county is so great.  The metro counties -- Harris and Dallas, then Bexar and Travis -- are more blue than red, but third-largest Tarrant and the suburban DFW counties of Denton (6th) and Collin (7th) are crimson-colored.  The three counties that round out the top ten are blue: El Paso, Hidalgo, and Fort Bend (which is actually purple, but trending azure and there are high hopes for a flip).

-- Alas for excited Democrats, a glob of recent polling appears to show the the prize of Texas' 38 Electoral College votes just out of Clinton's reach.

-- Still think there's a big difference between Democrats and Republicans, especially in Texas?  You really need to revisit that thinking.

-- One of the more under-reported stories of late has been the polling deflation of the Libertarian ticket.  This week Johnson-Weld hit three percent; less than two months ago it was ten.  It appears that's one of the places Hillary Clinton has siphoned votes from as she has surged, and the message to millennials about moving over from Gold to Blue seems to be working.

Update: Johnson's more recent meltdowns, captured on camera by HBO and The Guardian, aren't going to help him.

-- The Justice Department is coming to monitor Houston polls for 'irregularities".

Six teams of Justice Department officials will be dispatched to observe Election Day voting at 75 polling locations in Harris County as part of an investigation into allegations that the county failed to provide reasonable access to mobility-impaired voters.

Harris County will field its own teams on Election Day as part of an arrangement approved Thursday by U.S. District Judge Alfred H. Bennett.

Bennett, however, told county officials that he found it "deeply disturbing" that Justice Department observers saw a visibly armed county investigator with a badge filming an elderly African-American woman with a walker entering a polling place this week for early voting.

"That's voter intimidation," the judge said, ordering the Harris County Attorney's Office to provide written notice explaining how it plans to avoid a repeat of the scenario.


-- Texas Leftist's endorsements were mostly Democrats, but he did work in a couple of Greens -- Martina Salinas (Texas Railroad Commission) and Joe McElligott (HD-127) -- and a couple of Republicans.  He apparently missed the memo on the shitty Dems running for the state Supreme Court and Court of Criminal Appeals.  Socratic Gadfly knocked down the fervor for the Libertarian running for the Railroad Commission.

-- Wonder Woman flies her invisible plane to Houston to stump for Hillary today. 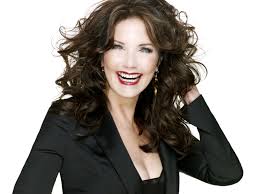 On Friday, October 28, Actress Lynda Carter, television’s original Wonder Woman, and Hillary for Texas will host a phone bank with supporters in Houston. Carter knows that Hillary Clinton will continue to lift up American children and families while fighting against Trump’s dangerous and divisive rhetoric. At the event, Carter will discuss how supporters can mobilize from now until Election Day to ensure that Hillary Clinton becomes the next President of the United States.

With more people voting in this election than any in history, Carter will urge Texans voters to take advantage of in-person early voting. Voters can check their registration status and learn more at iwillvote.com.

Media planning to cover the event are asked to RSVP to Miryam Lipper at mlipper@hillaryclinton.com. 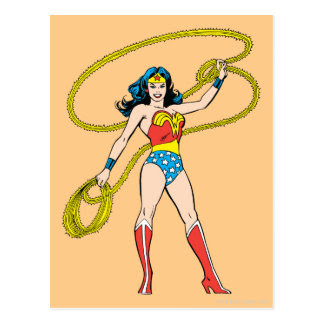 I'd absolutely be willing to get roped with the Lasso of Truth, but the words coming out of my mouth would still be "I have already voted for Jill Stein".
Posted by PDiddie at Friday, October 28, 2016

Lozano sounds exactly like Shirley McKellar, running against Gohmert Pyle up here. Any Dem who mentions God and family values in the first paragraph of her statement ...

And Wonder Woman may need to use that Lasso of Truth on Hillary's emails, it seems.