Turnout swollen as voters wish to be done with this election

Pro tip: voting early stops the flood of junk to your mailbox.  (The state runs a program every night marking early voters each day as out of the pool, so for example, I cannot go back and vote again today.  Or tomorrow.  Or on Election Day.)

Monday's turnout of 67,471 in-person voters shattered the (Harris) county record of 47,093 set in 2012 for the first day of early voting. Another 61,543 mail ballots had been returned as of Monday, bringing the total number of early voters so far to 129,014 in Texas' most populous county.

Records were also broken by substantial margins in counties such as Dallas and Tarrant, which reported first-day turnouts of about 43,000 each. Bexar and Travis counties reported about 30,000 first-day voters apiece.


Also in Nueces (heavy D not so much) and Denton (formerly blood red but these days a little more purple).  Update: And via Chisme: Williamson, Bastrop, and Hays, the suburban (R-dominant) counties surrounding Austin and Travis County.  Charles's post keeps us up to date on the minutia of the first voting day in this cycle; my experience yesterday at the Bayland Park EV location in southwest Houston has me rethinking what I should be forecasting as to how things might turn out for Texas and Harris County. 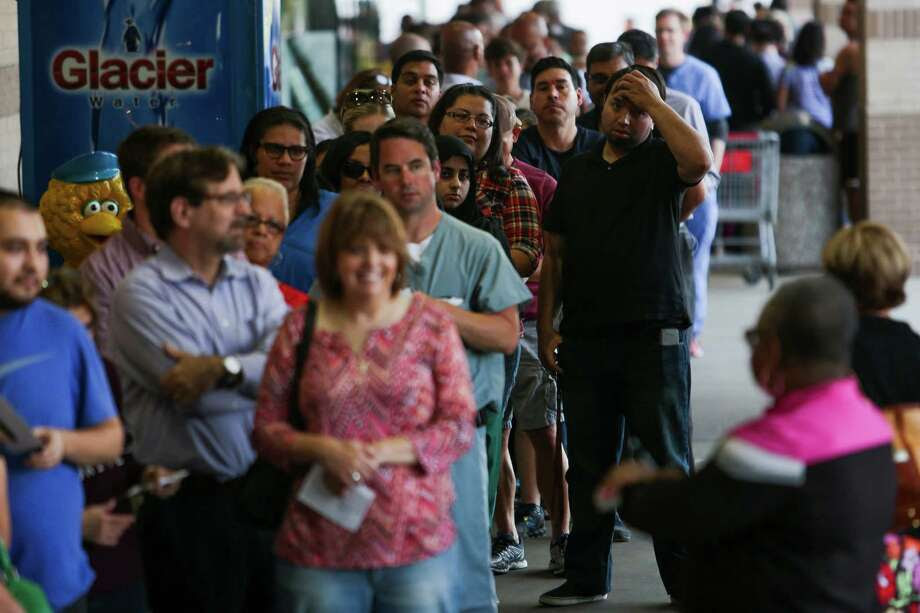 That photo above (courtesy Chron) is what my usual EV poll, the Fiesta Mart on South Main at Kirby Drive, in the shadow of NRG Stadium, looked like yesterday about 1 p.m. as I pulled in to find parking.  Out the door, across the front, and wrapping around the corner of the building to some distance I could not see.  That photo -- and this next one more clearly -- shows the line doubling back, serpentine-style. 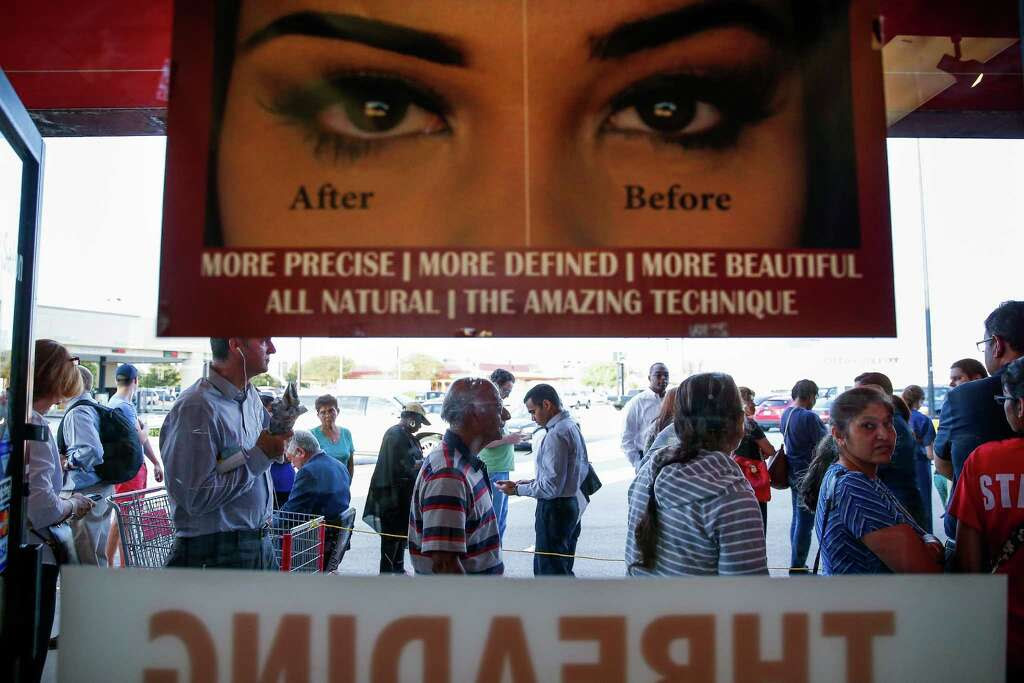 I don't know whether that was earlier or later in the day.  All I know is when I saw that queue -- again in just single file, not back and forth as the photos show -- I turned my truck toward the exit and headed for Bayland.

Experience has taught me that Fiesta has a small area for voting, a smaller number of voting machines (less than 24) and that a line out the door generally means a line snaking down the aisles inside the store.  In 2008 I waited 45 minutes to cast my ballot during EV's first week, the longest I've ever stood on queue to vote, and my wife waited about the same time on the only Saturday of early voting.  In 2012, a larger turnout than four years' previous, it took us both about half an hour to vote together at Fiesta.

Bayland has more parking, more e-Slates (yesterday, about 36), which means an extra election clerk manning a third JBC, the machine that prints the four-digit access code the voter uses to sign in to access his or her ballot.  (A more detailed description of this process is here.)  As I parked and walked in, I asked some of the card pushers outside if they were getting any reports about the wait time.  I also asked some voters as they made their way past me to their parked cars.  The consensus was an hour-ish, in some case 90 minutes, and one person said 'two hours'.  That gave me pause, but I ambled on toward the end of the line anyway.

It became rapidly clear to me that this would be a long wait, but it appeared to be steadily moving along and so I queued up, read my phone for 10 or 15 minutes and then took note of the fact that the Bayland poll also had the line folding back on itself through several meeting rooms inside the community facility.  The longer I waited, the more I wished I had not, although there were many voters much older than me sticking it out, and there were plenty of chairs in each room to sit and wait, so I hung on, though my feet and back were both aching after the first hour.

The rationale for enduring this should be obvious by now.

"We just want to get it over with," Sam Tabb said as he stood in line at a polling station in Pasadena. "We will be glad when this whole thing is over. It's just been a real zoo. In my lifetime, it's probably the worst election ever."

Brandy Holmes, a 31-year-old engineer who said she'd marked Monday on her calendar weeks ago, echoed that sentiment. "Let's just get this over with."


It was another hour and fifteen minutes before I reached the clerk's tables, and having performed this pollworker task myself in many elections in the past, immediately noted the bottleneck: the clerks at the sign-in table were moving the mass of weary voters far too slowly.  While there were three rows of twelve e-Slates, each row with its own JBC clerk, the e-Slates themselves were mostly unoccupied; at least eight of the voting machines on each row were standing vacant, waiting for a voter.  I found that to be inexcusable but did not offer a complaint.  (At Fiesta, a voter typically has to wait a minute or two for an e-Slate to become available after signing in and getting a PIN).

Harris County Clerk Stan Stanart said he'd expected a record-breaking turnout of as many as 55,000 voters, but that even he was surprised by the number who actually came out.

Stanart said his office did receive numerous complaints about long lines at early-voting spots. He recommended that those planning to vote this week check the turnout numbers by location at HarrisVotes.com and head to a spot with low turnout to avoid long lines.

Elections officials will be sending extra laptops to select locations on Tuesday in order to speed up the process, Stanart said.

The lines started forming early and stayed long throughout the day, snaking around buildings at polling places at several locations. By the afternoon, Harris County election officials said voters were casting 6,000 votes per hour. As the polls closed, people were still in line at some places.


It turns out I probably would have had a shorter wait had I stayed at the supermarket: as the County Clerk's spreadsheet revealed last night, Fiesta processed under 1300 voters, well behind its usual top ten heaviest county boxes, while Bayland had over 1900.  No telling how many folks saw long lines at both polls, and elsewhere throughout the county, and did not bother.

Perhaps the slowdown wasn't those clerks' fault, though.  Some voters had questions that bogged things down a bit; some were slow to produce ID, but none that I saw were being forced into the 'affidavit of reasonable impediment' to producing photo ID-route.  While my wait was about to come to an end, I asked one of the officiating clerks about that process and she said those voters would have to defer to a side table, complete the affidavit... and then go to the back of the line.  The clerk at that table was playing a game on her phone.

Here it is important to note a truism with respect to long waits at polling places.


Reminder that when you see hours-long voting lines in cities, that's not democracy in action, it's voter suppression in action. https://t.co/pLzK0UltRn
— Adam James Platt (@AdamPlatt1999) October 21, 2016


We've known this sort of thing has happened at least since Election 2004, when despite the HAVA's enactment in the wake of the debacle that was Election 2000, several factors -- among them Ken Blackwell, Diebold, and specifically black precincts in Cleveland, Columbus, and Cincinnati -- threw Ohio to George Walker Bush.

Voter suppression, you see, is even more difficult to prove than so-called voter 'fraud'.

(Is the system 'rigged', as Trump has stoked the fears of?  The right answer is: it always has been, in some form or fashion, small or large -- from the time of Landslide Lyndon and before -- all the way to the present day.  It's just that the only people complaining about it are the ones who think it's rigged against them, and that changes from one election to the next.)

So let's hope that this blue wave poised to sweep Texas, boosted perhaps even by the so-far mythical Latino surge, isn't going to be intimidated by Republican efforts to build -- or hold their fingers in -- the dike against it.  And speaking of water, bring a bottle with you, maybe a snack, possibly your medications, to the poll when you get ready to cast your ballot.

So for the money shot: that ten-point lead in Harris County no longer looks like an outlier, and it's a pure tossup that Texas flips, unless voter turnout starts to wane through the rest of the EV period or on Election Day itself.  Nate Silver still doesn't think so, but I feel like I need to hedge my longstanding skepticism.  I think it's within the Democrats' grasp ... but they could still fumble it.

Update II: Here's more goat-entrail reading from EV Day One from Texas Monthly and the Chron (tl;dr: it's still too early to say, but the trends are interesting).
Posted by PDiddie at Tuesday, October 25, 2016