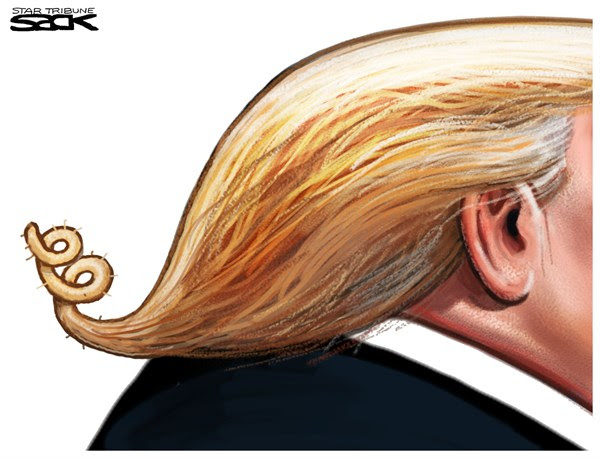 Off the Kuff published two interviews designed to help Houston voters make up their minds on the recapture referendum.

Libby Shaw at Daily Kos is delighted to learn that Trump's scandals could impact down ballot candidates, even in Texas. Texas GOP is Frightened By Trump's Scandals. Dems could sweep Harris County.

Socratic Gadfly looks at Ruth Bader Ginsberg's recent disrespect for the spirit of the First Amendment, including noting how this refutes "oh the SCOTUS" claims of two-party-only voters.

A reporter arrested at the North Dakota pipeline protest has been charged with three felony violations carrying a 45-year maximum sentence.  Txsharon at Bluedaze passes along a letter of support for Deia Schlosberg, and a reminder that we don't arrest or charge journalists in the United States who are just doing their jobs because, you know, First Amendment.

CouldBeTrue of South Texas Chisme is not surprised that Texas lawmakers want to take more anonymous goodies from donors. They love the rich.

Egberto Willies comments on the ProPublica story where a five-year-old girl told the author's son on the playground: "only white people".

Texas Leftist is again conducting candidate interviews via questionnaire for downballot candidates in the Houston region.

Some pictures and video of Jill Stein's Texas tour this past weekend were posted by PDiddie at Brains and Eggs.

Neil at All People Have Value took his public art sign-carrying effort to Atlanta, Georgia. APHV is part of NeilAquino.com.

The editor of the Lewisville Texan Journal says that when your path is uncertain, hit the road.

More blog posts from across our beloved Texas!

The Texas Moratorium Network advances the 'March to Abolish the Death Penalty', at the Capitol in Austin, on October 29th.

The latest Texas Watch podcast sees the insurance lobby setting the table for the next legislative session.

Jef Rouner exercises his binary logic to remind Democrats that their votes aren't wasted by repeating the logical fallacy that not voting for Democrats is a waste.

At the Texas Observer, Joe Lansdale explains why his East Texas neighbors are voting for Trump, and John Wright asks on behalf of Texas greens: "Won't Someone Think of the (Fracked) Children?"

Grits for Breakfast takes note of the vast resources being consumed by the state in criminalizing drug addiction.

Lisa Gray collects local stories of sexual assault in the wake of "grab her by the p*ssy" and "it was just locker room talk".

Lone Star Ma encourages Rep. Blake Farenthold's constituents to give him some feedback on his defense of rape culture.

Houston Strategies has a story about the recent 'saving' of the Astrodome in an aggreposting.

And the Digital Heretic points out why distrust of the corporate media is at an all-time high.
Posted by PDiddie at Monday, October 17, 2016