No knockout blows, and nobody got grabbed 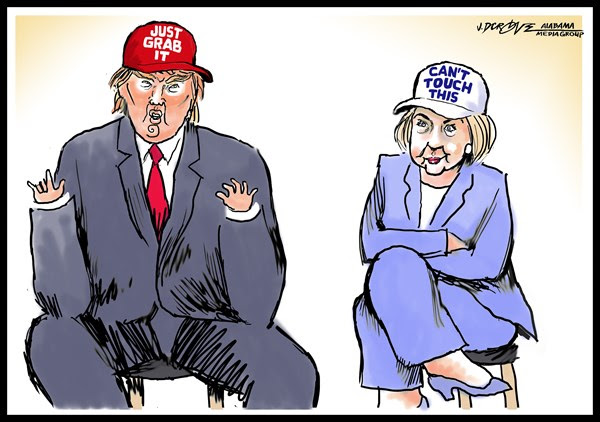 With all of the dread leading up to last night's townhall, I have to say ... having come through the other side and now looking back, it wasn't as awful as I feared.  Though it was plenty bad.

Say this for Donald Trump's Sunday night: For about an hour, America stopped parsing his apparent bragging, in the now-famous tape that surfaced Friday, about sexually assaulting women. [...]

Of course, that's because he gave the country so much other grist on which to chew as he flailed his way through a deeply weird, at times nasty, second presidential debate.

There was his promise to appoint a special prosecutor against Clinton if he wins the election. This is banana republic-type stuff, a vow to prosecute one's political opponent. "It's just awfully good that someone with the temperament of Donald Trump is not in charge of the law in our country," Clinton said, prompting the Trump response: "Because you'd be in jail."


Go read the rest.  Throwing these pieces of red meat to his fanatical caucus is essentially all that he has left.  As Nate Silver has observed, it simply won't be enough.

At roughly the 20-minute mark of the Sunday’s debate — about the point at which Trump said he’d appoint a special prosecutor to investigate Clinton and that she’d “be in jail” if someone like him had been president — it seemed prudent to wonder whether Trump’s campaign was over. I don’t mean over in a literal sense (it would be almost impossible to replace Trump on the ballot). But over in the sense that we knew the outcome of the election for all intents and purposes, to a higher degree of confidence than FiveThirtyEight’s statistical models — which gave Clinton “only” about an 80 percent chance of winning heading into the debate — alone implied.


Definitely go read the rest.  Clinton performed a surgical evisceration of Trump within the first ten or so minutes, but she did not finish as strongly and seemed to be trying to run out the clock.  She stumbled over the questions about the hacked Podesta emails that contained portions of her undisclosed speeches to corporate titans.

(Trump) put Clinton on defense over private speeches she gave to Wall Street firms, transcripts of which posted on Wikileaks late last week. He presented a steadier front and avoided chasing Clinton into terrain that might damage him, largely keeping the conversation on his own terms.

Those e-mails included excerpts from her paid speeches to Goldman Sachs and other Wall Street entities, in which she dismisses Americans’ concerns about a “rigged” financial system, says bankers are best equipped to be their own regulators, expresses a desire for free trade in the hemisphere, and asserts that it is often necessary for political leaders to take one position in public and another one in private.

Debate moderator Martha Raddatz pressed Clinton on that final point, reading a question submitted online that asked, “Is it okay for politicians to be two-faced? Is it acceptable for you to have a private stance?”

Clinton responded that she made the comment about public and private positions when talking about the movie Lincoln, in which Abraham Lincoln uses back room deals to secure the constitutional amendment to end slavery. The document revealed by Wikileaks corroborates this account.

“As I recall, I was speaking about the wonderful movie LINCOLN. And also about how CATCH ME IF YOU CAN is really underrated.” #Debate
— Sam Adams (@SamuelAAdams) October 10, 2016


Sandernistas were livid about the leaked transcripts, but Bernie Sanders himself gave her a pass  (notice I had to use overseas media to find these stories).  Whaddaya gonna do with this lousy sellout, folks?  Fall in behind him?  Write his name in?

The sniffle count was 104.  Juanita Broaddrick made her way into the media spin room.  Her appearance at the presser before the debate, along with Paula Jones, Kathleen Willey, and others prompted the night's second-best Tweet.


In the end, Clinton 'won', but Trump didn't lose.  And none of it makes much difference.
Posted by PDiddie at Monday, October 10, 2016

I would have liked to seen Broaddrick et al interviewed by, say, Counterpunch.