The Texas Progressive Alliance has never said anything like what Donald Trump said to Billy Bush when they thought no one was listening, not in a locker room and not anywhere else.  No decent person says things like that because no decent person thinks like that or acts like that.  What the TPA does say is in this week's roundup. 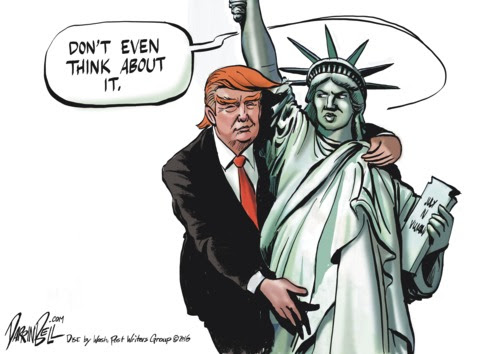 Off the Kuff looked at turnout and voter registration patterns and what they might say about this year.

Libby Shaw at Daily Kos shares an exposé as well as her own personal experiences to describe how Jim Crow continues to pervade the voter registration laws in Texas, in Jim Crow Actively Lurks in Texas: The State’s Voter Registration Laws.

Socratic Gadfly looks back 150 years or so into Southern racial and class history and finds one key word --— "mudsill" -- that explains much of the Trump voter phenomenon.

The Libertarian ticket seems to have hit their ceiling, and not just because Gary Johnson has short-term memory issues, writes PDiddie at Brains and Eggs.

CouldBeTrue of South Texas Chisme is glad that poverty is down in Texas, but food insecurity is still high.

Neil at All People Have Value discussed an interactive art work on the streets of Houston. APHV is part of NeilAquino.com.

Txsharon at Bluedaze posts details of the Earth Wind and Fire Energy Summit, in Addison later this month.

The Lewisville ISD sent out a parental advisory about the creepy clown appearances making news in Texas and other states, as reported by the Texan-Journal.

And Dos Centavos enjoyed the Festival Chicano this past weekend.

About a quarter of Texas police shooting deaths over the last decade -- more than 200 -- went unreported to the office of the Texas attorney general despite criminal penalties on the books for noncompliance, according to Grits for Breakfast.

The Texas Election Law Blog reminds those who aren't yet registered to vote in the 2016 election that they have until tomorrow to do so.

The Texas Observer reports on the bursting of the Texas private prison bubble.

Houston has higher levels of inequality and segregation than every U.S. metro except New York and Los Angeles, according to a researcher quoted at The Urban Edge.

The Texas Freedom Network has the latest from Pastor Robert Jeffress, who claims that your right to privacy as interpreted by the Supreme Court is an imaginary construct.

State Rep. Garnet Coleman writes about the Sandra Bland Act that he intends to file next session.

Eileen Smith waded into the fetid swamp of Donald Trump's sexism, a couple of days before that swamp got even nastier.

Betsy Barre has a problem with the collective reaction to the Donald Trump "grab her in the p----" video.

And Ashton Woods at Strength in Numbers publishes the first edition of the Chronicles of an Angry Black Queer.
Posted by PDiddie at Monday, October 10, 2016