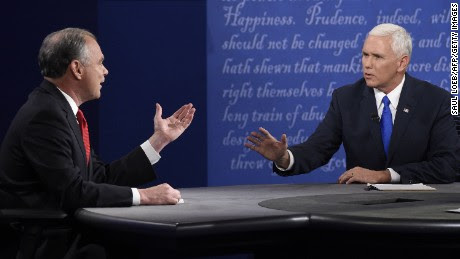 Pence 'won' on style -- he didn't sniffle or vomit on the table -- and Kaine 'won' on substance, but he was unpleasantly aggressive and interrupted far too much.


(I)t was as if two different Donald Trumps showed up at Longwood University on Tuesday night.

This Trump, Kaine argued, “demeans every group he talks about” and is the kind of “fool or maniac” who “could trigger a catastrophic [nuclear] event.”

Then there was the Trump that Pence kept evoking every time he responded to Kaine’s parries with a sad shake of his head or rueful chuckle: the Trump who “didn’t say” this or “never said” that; the Trump who doesn’t consider Mexicans rapists, but rather sees the current immigration system as a “heartbreaking tragedy”; the Trump who isn’t bigoted, but rather “fully support[s]” community policing; the Trump who might misspeak every once in awhile, but only because “he is a businessman” and “not a polished politician.”

In short: a kinder, gentler Trump.

As usual, the zero-sum Beltway pundits will declare one vice presidential wannabe the winner of Tuesday’s debate. But ultimately, it’s up to voters to decide which of the two Trumps on display better aligns with reality, at least as they see it — and that more than anything else will determine the effect, if any, of Kaine and Pence’s performances.

In truth, both candidates did well, because they both did what they came to Farmville to do.

The very fact that the debate was more of a referendum on Trump than Clinton should count as a win for Kaine. With his constant interruptions and clockwork attacks, Kaine forced Pence to talk about Trump a lot more than Pence forced Kaine to talk about Clinton. That was the point. In a battle between two historically unpopular presidential candidates, the one the election becomes about is the one who’s more likely to lose. Consider that nearly every unflattering Trump quote that Kaine cited was factually accurate — despite Pence’s dodges and more-in-sorrow-than-anger objections — and you have plenty of fodder for a few more “Yes, Trump really said X” news cycles. And that, in turn, could be enough to convince a few more swing voters that Trump is temperamentally unfit to serve as president — which is, of course, the Clinton campaign’s ultimate goal.

A key example of Kaine’s executing this strategy came early in the debate. After the Democrat rattled off a list of Trump’s various offenses — McCain, Judge Curiel, rapists, “‘dogs,’ ‘pigs,’ ‘disgusting'” — Pence countered that Trump’s insults were “small potatoes compared to Hillary Clinton,” who called “half of Donald Trump supporters a ‘basket of deplorables.’”

Kaine was ready with his rebuttal.

“And she said, ‘I should not have said that,’” Kaine replied. Then he seized on the fact that Trump has never expressed similar regrets as an opportunity to run through Trump’s greatest hits yet again.

“You will look in vain to see Donald Trump ever taking responsibility for anything and apologizing,” Kaine concluded.

Here's another place where the two talked past each other.

Thanks to his running mate’s long history of divisive remarks — and Kaine’s incessant reminders of them — Pence had the harder task Tuesday: making Trump seem tolerable (and tolerant) to voters who still haven’t made up their minds about him.

So rather than defending the indefensible, Pence simply decided to pretend that it didn’t exist.

One exchange — about ISIS and foreign policy in general — stood out. After Kaine battered Trump relentlessly on the subject — “He does not have a plan. He trash-talks the military, ‘John McCain is no hero,’ ‘The generals need to be fired,’ ‘I know more than them,’ ‘NATO is obsolete’” — Pence tried to brush it off.

And here's another of Pence's disarmingly condescending putdowns.  "Did you work on that one for a long time?", before ...

“That had a lot of creative lines in it,” he laughed.

“See if you can defend any of it?” Kaine snapped.

But Pence refused to take the bait. Instead, he gave “this president credit for bringing Osama bin Laden to justice,” then pivoted to a generic conservative attack on Obama’s foreign policy ...


Kaine had the far easier case to prosecute, and did so well.  Pence just dodged.  But the governor looked "presidential" while doing so, and that's what stood out to the talking heads afterward. (Update: More debate viewers thought they'd rather have a beer with Pence.  And so it goes.)


It is a credit to Pence’s skill as a political communicator — he worked for several years in the 1990s as a conservative radio and television host — that he was able to pull off this sort of 180-degree turn without inducing whiplash. He was polished, disciplined and steady. He seemed calmer than Kaine, and considerably more polite. He sounded empathetic. He spoke in talking points, but delivered them as if they were thoughts that had just occurred to him. And most important, Pence realized that the best way to defend Trump was not with words — which he rarely offered up — but rather by leaving viewers with the impression that Mike Pence is everything they fear that Donald Trump is not: decent, grounded, consistent. If that guy’s also going to be in the White House, how crazy could things really get?

Vice presidential debates rarely, if ever, affect the outcome of an election. The most they can do is “change the narrative” until the presidential candidates debate again.

It may be, then, that while Kaine won on points, Pence won on style — and both, in the end, conjured up the Trump they intended to conjure up. The story of those two Trumps will be the story of the rest of this race.

I had forgotten that Pence made his bones by being a Rush Limbaugh wannabe before entering politics.  And there were a few "I wish Pence was the nominee" Tweets from regretful conservative #NeverTrumpers.  Been there, seen that (Paul Ryan, Sarah Palin; and also from Democrats in the past: Joe Biden -- yes indeed, and in this cycle too -- and Lloyd Bentsen).  On policy, Pence is Trump without the swagger and bombast, and this was his audition for 2020.  Mark it; he'll be in the thick of the GOP scrum in four years.  (Update: No More Mister has an insightful rebuttal to my -- and Chris Matthews', whom I don't watch any more -- prediction about Pence.)

Ajamu Baraka's debate performance was more thoughtful, IMHO.  Alas, the only candidate of color, the only veteran, the only person willing or able to discuss or even acknowledge American hegemony was -- just as Kaine and Pence -- preaching to his choir.  And frankly it's a shame that the Libertarians have gone into hiding for these affairs; William Weld could have made things interesting by joining Baraka in Democracy Now's after-debate, instead of doing his solo bit.  I barely saw any Libs participating in the Twitter feed.

All four veep prospects represented well enough to make the case for their running mates, but the needle won't be moving over the remaining thirty-four days.  These, even more than the presidential faceoffs, are just pep rallies for red and blue cheerleaders.  During the course of the evening on Twitter, the #HipHopAwards broadcast on BET trended higher than the #VPdebate.  That alone should tell the full tale about the optics of two old white men quarreling about women's reproductive freedoms, or improving police tactics and making significant reforms to criminal justice without mentioning the words 'Black Lives Matter' in seeking a solution to the nation's most compelling social crisis.

Yeah, the system isn't rigged; it's broken.
Posted by PDiddie at Wednesday, October 05, 2016