Downballot Repubs try to avoid going down with the SS Trump

They got on the Trump Train, now they're fleeing the sinking ship.

Republicans are despondent that Donald Trump threw away his third — and final — chance to win votes for himself and GOP congressional candidates at Wednesday night’s presidential debate.

Trump appears increasingly unlikely to win the 270 electoral votes needed to gain the White House, but the party that nominated him is growing more concerned that they’ll lose majorities in both the U.S. Senate and House, reported Politico.

“The biggest loser (Wednesday) was not Trump — the presidential race is over,” said GOP pollster Robert Blizzard. “Instead, down-ticket Republicans lost tonight. They needed some help and got absolutely none.”

Paul Ryan is busy trying to unshackle R-bots like Will Hurd from Trump, but I think it's too late.

With polls showing Trump is headed for a resounding loss, Republicans may start trying to salvage their congressional races by promising to serve as a “check and balance” against a likely Hillary Clinton presidency.

“Trump was already behind,” said Bill Kristol, a Trump critic and editor-in-chief of The Weekly Standard. “He didn’t help himself (Wednesday), indeed he hurt himself. He’s very likely to lose, and to lose badly. He’ll drag the Senate and House down with him unless Senate and House candidates can make the case they’re needed to check and balance Hillary.”


Nate Silver sees the US Senate flipping with R incumbents Mark Kirk (IL), Pat Toomey (PA), Roy Blount (MO), Kelly Ayotte (NH), and Ron Johnson (WI) all losing.  Indiana (D Evan Bayh) and Nevada (D Catherine Cortez Masto, recently surging) are holds for the Blue team, while Florida (Little Marco Rubio) and Ohio (Rob Portman) stay Red.  North Carolina (incumbent R Richard Burr and D challenger Deborah Ross) is rated a toss-up, but Burr has maintained a small lead throughout.  That would also be a hold for the Pachyderms if he hangs on.  All of that coming true leaves a Senate majority going to the Democrats by a count of 52-48. 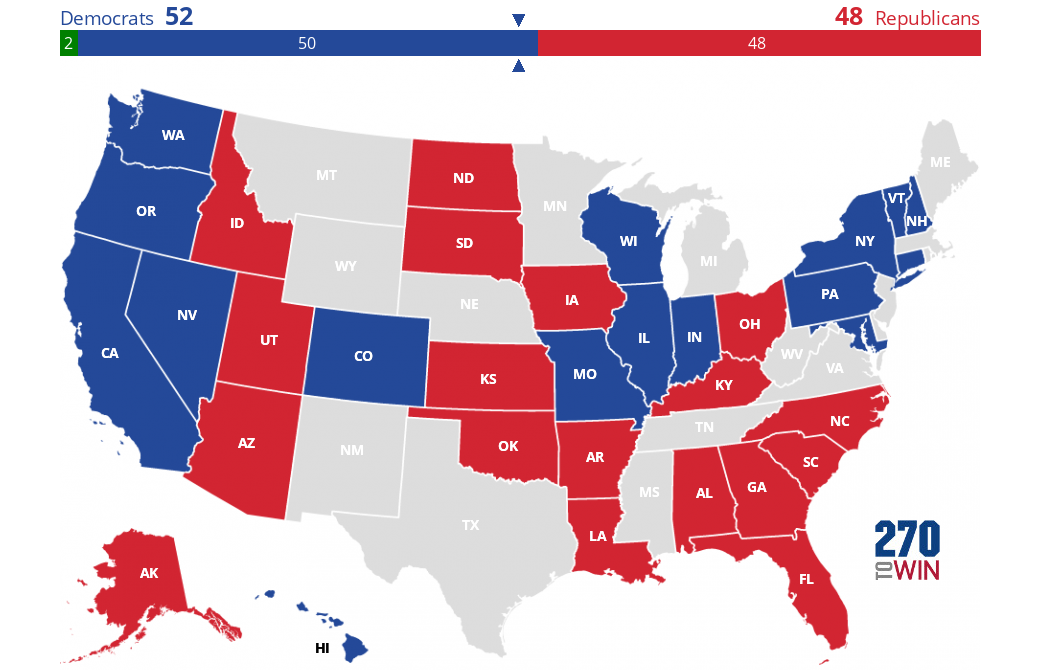 Later: Is the House in play or not? (The Dems need thirty seats).
Posted by PDiddie at Thursday, October 20, 2016