This space had been reserved for Howard Dean and his diagnosis of Trump's sniffles Monday night as evidence of a cocaine problem, but in a come-from-behind victory at the wire ... congratulations, Mr. President.  You earned it. This might be too complicated.  Let's check in with Ted (Keanu). 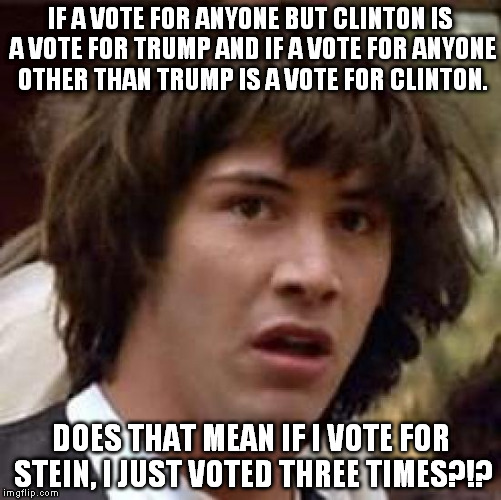 Still a little deep.  What say you, Most Interesting Man in the World?

Obama's having a pretty rough final year, what with being the lone ranger supporting the TPP, getting his veto overridden yesterday, a disturbingly silent voice on the increasing number of racial confrontations in the nation's streets as police continue to gun down unarmed black men like it's open season, scolding people about tarnishing his legacy and now this.

And can anyone explain the genesis of the idea that the Hatch Act should exclude the president and vice-president?  The law is all but toothless anyway; those who violate it -- like Julian Castro -- can simply say they didn't mean to and suffer no consequence (save a political one, of course).

Here's hoping the president can avoid pulling any more Kanye Wests from now to Election Day.
Posted by PDiddie at Thursday, September 29, 2016

On the blog's Facebook page, I have now been called a Klansman for using the president's middle name. That, coupled with "bro-gressive" earlier this year by yet another Shillbot, has all but made my year.

Third party votes ARE ok by him ... if they're for the House of Saud.

Excellent post and thanks a lot for sharing this kind of information Thank you so much for posting this important information.
Tax Return Services in Barking