The Texas Progressive Alliance has a secret plan to ask someone else for a plan to bring you this week's roundup. 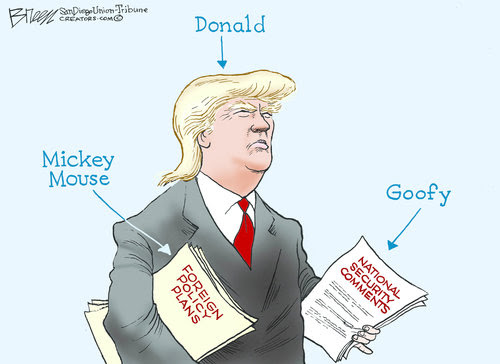 Off the Kuff is not surprised that the Justice Department is accusing the state of Texas of misleading county election officials about the updated voter ID requirements.

Libby Shaw at Daily Kos believes the editorial board of the Dallas Morning News should hold the Texas Republican Party to the same standard as it does Donald Trump. According to the DMN, Donald Trump is no Republican. But neither is the Texas GOP for that matter.

Socratic Gadfly looks at the Texas Trib and Bizjournals touting "the world of apps" as an allegedly surefire get-out-the-vote idea, is sure that it's NOT a surefire idea with folks like Valley Hispanics, but expects the Texas Democratic Party to be suckers for it anyway with pretty much the same results as before.

Equality Texas is hopeful for some improvements in civility -- at the very least -- after AG Ken Paxton had supper with the Briggle family.

Egberto Willies believes the story of the pharmaceutical company CEO who raised the price of EpiPens to stratospheric levels ought to be enough to motivate us -- and Congress -- into taking some action.

"A basket of deplorables" was a bad gaffe but still might not cost her the election, writes PDiddie at Brains and Eggs.  Think more along the lines of "clinging to their guns and Bibles" as opposed to "47%".

Txsharon at Bluedaze finds herself once again in the fracking crosshairs.

Neil at All People Have Value added a page of his public art and revised his photography page as well at NeilAquino.com.

CulturemapHouston has news of Houston's finest Italian restaurants joining the global relief effort for victims of the earthquake in that country by offering the signature dish of the town of Amatrice.

Jonathan Tilove at First Reading Dem-splains why Texas Republicans would be better off with a President Hillary Clinton.

Lawflog details the bar grievances he has filed against Hillary Clinton and several other attorneys associated with her and her presidential campaign.

Juanita Jean reminds us of the Trump U - Greg Abbott connection.

Eileen Smith looks at the Catholic angle on Donald Trump.

The TSTA Blog is hesitant to be optimistic about pre-K in Texas.

Houston's Metro is looking for an urban designer.

Jenny Dial Creech is not having Art Briles' apology.

And Pages of Victory describes his altercation with those aggressive red wasps that are so prevalent this time of year.
Posted by PDiddie at Monday, September 12, 2016

"The Texas Progressive Alliance brings you the pneumonia-free version of this week's roundup."

Just had the right cartoon for it.