"A basket of deplorables'

Not her "47%" moment (unless she manages to snatch defeat from the jaws of victory and then only in the mid-November talking-heads analysis).  It feels more like a "clinging to their guns and Bibles" moment; a serious error in judgment but a non-fatal one. 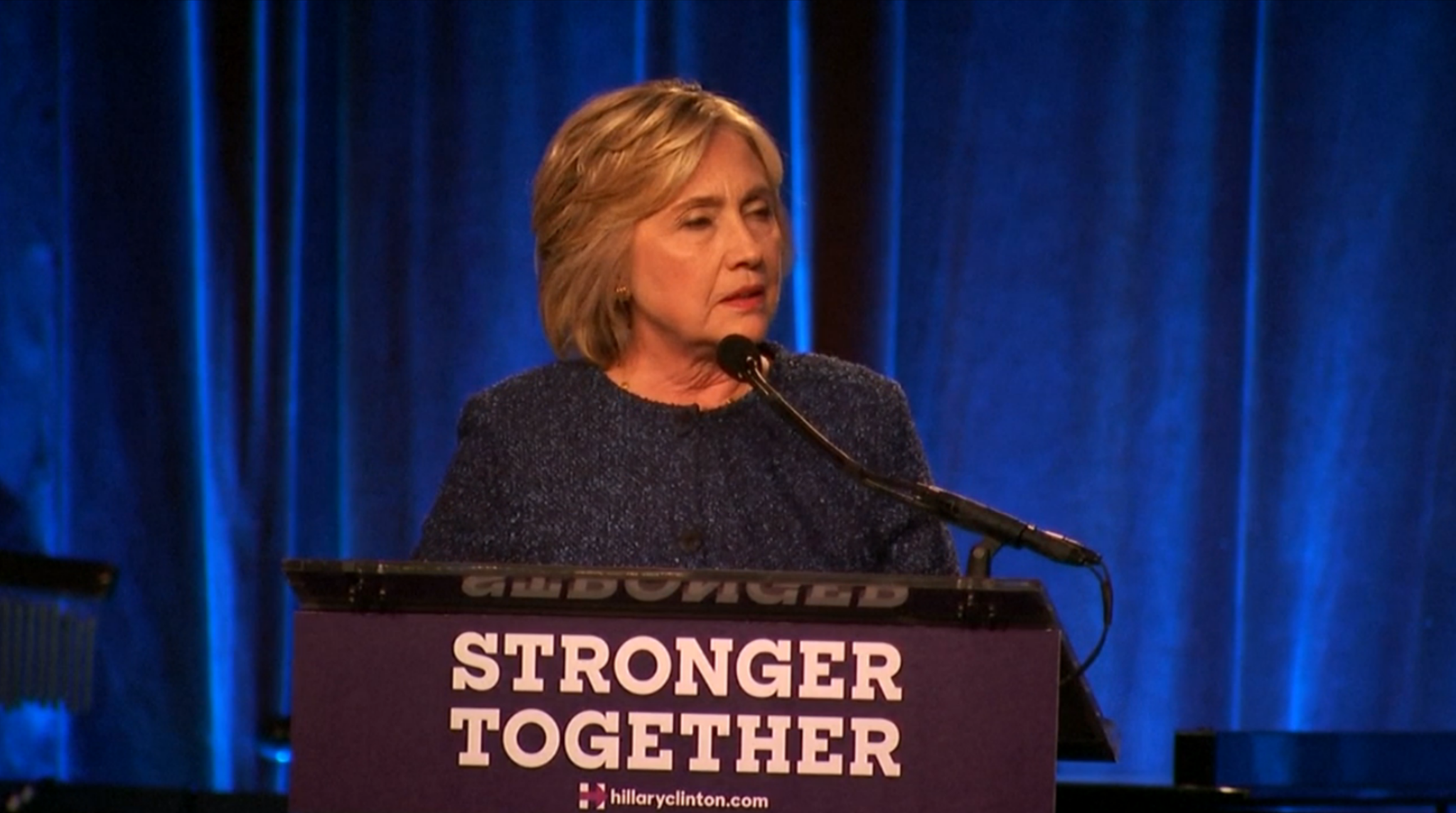 I think it was a stupid thing to say if you’re trying to win an election.

Another thing that occurred to me was that during the brutal Democratic primary it wasn’t unusual to hear Bernie supporters labeled as sexist and racist, so do we also belong in “the basket of deplorables”? Does Clinton really believe that all of her supporters are perfect, tolerant, compassionate, people? Pure as the driven snow? Does she really think that none of them are even a little bit xenophobic, a little bit “Islamaphobic”?

Lastly, the optics were awful, imo. There she was before a room full of rich people and she elicits laughter by mocking fellow Americans by insulting them en masse and publicly writing them off. Is that a wise thing to do when you’re in the process of interviewing for the job of representing all Americans?

I don’t think that it was wise, I think it was elitist and stupid. And it wasn’t helpful to a country on the edge.

Over at Twitter #BasketOfDeplorables (which has been trending all day) I saw a comment that hit home for me that said that’s what happens when you spend “all August fundraising with elites”. I agree with that conclusion.


Her election to lose, and she's doing her damnedest to lose it.

You could not pick a worse, more inept, inexperienced or offensive joke of a presidential candidate than Donald Trump. The United States has become the butt of international ridicule over our very own “Kim Jong-Un.” Any candidate running against Trump from the opposing major party with a pulse ought to be beating him in the polls by double digits. But Hillary Clinton isn’t.

The Democratic nominee is barely ahead of “the most unpopular presidential candidate since the former head of the Ku Klux Klan,” and a recent CNN poll puts her at 2 percent behind Trump. Granted, it is only one poll, and several other recent polls have found her a few percentage points ahead. Still, no Democrat could ask for an easier Republican candidate to beat. In the history of American presidential races, it is likely we have never had a more comically unsuitable figure as Trump nominated by a major party. And yet Clinton is struggling to come out ahead.


I haven't had a conversation with a single solitary Hillary supporter that is willing or able to discuss the reasons why she isn't crushing Trump.  Her flaws, mind you, not his and not those of his base.

The Democrat’s ardent supporters—those who have championed her from Day One—claim that we live in a sexist country and that her gender is what is standing in the way of most Americans embracing her. They assert that the media and her critics hold her to an unfairly high standard. But in a country where white women have benefited far more from affirmative action policies, how is it that we easily elected the nation’s first black president twice, only to stumble over a white female nominee?

The problem is not her gender. [...] Her refusal to even attempt to embrace bold progressive values and her inability to read the simmering nationwide anger over economic and racial injustice are the larger obstacles to her popularity.

In positioning herself first and foremost as what she is not—Trump—Clinton is picking only the low-hanging fruit. My 9-year-old son could make fun of Trump in clever ways, and does so routinely. For Clinton to fixate on Trump’s endless flaws suggests that her own platform has little substance. For example, in a recent speech she said of Trump, “He says he has a secret plan to defeat ISIS. The secret is, he has no plan.” While these kinds of statements might make for funny one-liners, Clinton’s main credential is that she once led the State Department, and she did so with such hawkishness that Americans who are weary of endless wars are not impressed by the experience. (Not to mention that she was caught telling lies about her private email server while secretary of state.) If she proposed diplomacy over war, a plan to exit Iraq or Afghanistan or Syria, a promise to withhold weapons from Saudi Arabia, a commitment to Palestinian human rights, etc., voters might sit up and take note.


Forget hoping she abandons her bellicosity; no candidate as experienced as Clinton should be committing such tone-deaf gaffes.  Not even in a room full of five- and six-digit check-writers.

Black voters tend to vote Democratic—a fact the party has taken for granted for decades. But if Clinton wants to earn those votes, she could take a page out of Green Party presidential candidate Jill Stein’s book and visit (or send a representative to visit) the ongoing occupation of Los Angeles City Hall by Black Lives Matter activists. BLM is calling on Mayor Eric Garcetti to fire Los Angeles Police Chief Charlie Beck over a spate of killings by officers that has made his department the most violent of all departments nationwide. Instead, Clinton goes to Beverly Hills for a fundraiser to hobnob with wealthy donors and celebrities, including Garcetti.


One thing I have noticed, anecdotally, is some black voters and influencers starting to move away from her.  I cannot tell for sure if this is meaningful or not.

Rather than reaching out to American voters on such issues, Clinton has been busy pandering to one particular community: the uber-rich. According to a New York Times article, she has made multiple trips to wealthy enclaves over the past month alone. In addition to Beverly Hills, she has visited Martha’s Vineyard and the Hamptons, rubbing elbows with celebrities and other rich elites. Just in August she raised more than $140 million through such fundraisers—easy fodder for the GOP to criticize in a new set of ads.

While making herself accessible to America’s upper classes, she has made herself almost completely unavailable to the press. Until Thursday, Clinton had not held a single news conference in 2016, inviting the unflattering comparison to President George W. Bush, who came under fire for avoiding interactions with the media. Bush was skewered for acting like he was hiding something, afraid the press might ask hard questions that would invite a blundering response. Clinton, one could argue, does not need to win over the press—most mainstream outlets already embrace her nomination and are pushing hard for her election. A recent article by Paul Krugman in the Times is a prime example. Ordinary Americans, however, continue to be unimpressed.

Perhaps Clinton feels that she can win without trying. After all, she has said publicly to her supporters, “I stand between you and the apocalypse.” She is positioning herself as a better option for president than the apocalyptic one. But that’s not saying much. And perhaps that is the point.

Maybe Clinton thinks she does not need to win over ordinary Americans. She knows she has the support of the Wall Street elite, the Pentagon war hawks and even a growing number of Republicans, one of whom implored his fellow Republicans to save the party by voting for Clinton.


And yet all of that may not be enough, as the polls are showing.

If Clinton loses this election, it will not be because Americans are dumb, racist misogynists who would cut off their noses to spite their faces in refusing to elect a sane woman over an insane man. It will not be because too many Americans “selfishly” voted for a third party or didn’t vote at all. It will be because Clinton refused to compromise her allegiance to Wall Street and the morally bankrupt center-right establishment positions of her party and chose not to win over voters. This election is hers to lose, and if this nation ends up with President Trump, it will be most of all the fault of Clinton and the Democratic Party that backs her.


As I post this today, I still think she wins.  But if we're using the two-horse-race analogy, she's fading fast and in danger of being overtaken at the finish line.  I have to say, given these most recent national polling developments -- which again are not the Electoral College, and most assuredly not the EC or even the popular vote as Surveyed by a Monkey -- I am still bemused at those Democrats who allow themselves to believe, in however slight an amount it may be, that Texas may flip.  I think they're just trying to scare progressives into voting for Clinton, and that, sadly, is working.  For a party that gets so few votes in Texas, the Greens certainly punch above their weight in terms of engendering fear, loathing, and contempt from partisan Democrats.

Two things to keep in mind:

Clicked the "scared" link and, ... Neil? Really. As if Hillz ever was going to win Texas or it was being counted in her path to victory.

Oh, well, someone else to write off a bit more.