"Mere factual innocence is no reason not to carry out a death sentence properly reached." 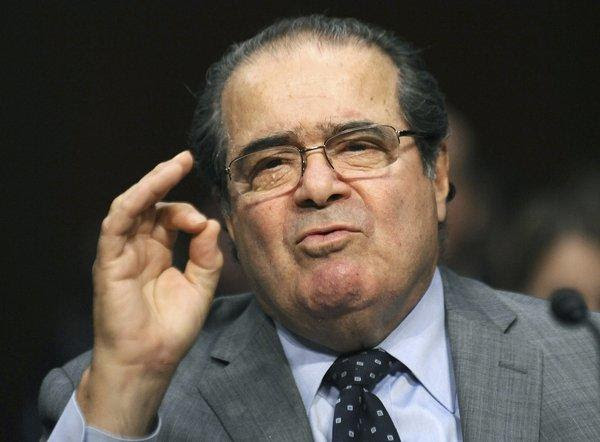 Justice Antonin Scalia, on capital punishment (not the actual words, but certainly his intention).

Rest in peace.  May your god have mercy on your soul.  I have none to give.

The ramifications for the Supreme Court's workload, the Supreme Court's future composition and without question the 2016 presidential contest are enormous, and just beginning to be calculated. Some are detailed in Laura Clawson's post here.  Republicans have already promised no new justice will be confirmed while Obama is president.  Think Progress:

The longest it has ever taken to confirm a Supreme Court nominee is 125 days. Obama has 361 days left in office.


And hey, this is as good a time as any to emphasize the importance of a Sanders presidency ...

Update: SCOTUSblog answers the questions about what happens with this term's cases.

The passing of Justice Scalia of course affects the cases now before the Court.  Votes that the Justice cast in cases that have not been publicly decided are void.  Of course, if Justice Scalia’s vote was not necessary to the outcome – for example, if he was in the dissent or if the majority included more than five Justices – then the case will still be decided, only by an eight-member Court.

If Justice Scalia was part of a five-Justice majority in a case – for example, the Friedrichs case, in which the Court was expected to limit mandatory union contributions – the Court is now divided four to four.  In those cases, there is no majority for a decision and the lower court’s ruling stands, as if the Supreme Court had never heard the case.  Because it is very unlikely that a replacement will be appointed this Term, we should expect to see a number of such cases in which the lower court’s decision is “affirmed by an equally divided Court.”

The most immediate and important implications involve that union case.  A conservative ruling in that case is now unlikely to issue.  Other significant cases in which the Court may now be equally divided include Evenwel v. Abbott (on the meaning of the “one person, one vote” guarantee), the cases challenging the accommodation for religious organizations under the Affordable Care Act’s contraceptive mandate, and the challenge to the Obama administration’s immigration policy.

The Court is also of course hearing a significant abortion case, involving multiple restrictions adopted by Texas.  In my estimation, the Court was likely to strike those provisions down.  If so, the Court would still rule – deciding the case with eight Justices. Conversely, the Court was likely to limit affirmative action in public higher education in the Fisher case.  But because only three of the liberal Justices are participating (Justice Kagan is recused), conservatives would retain a narrow majority.

There is also recent precedent for the Court to attempt to avoid issuing a number of equally divided rulings.  In Chief Justice Roberts’s first Term, the Court in similar circumstances decided a number of significant cases by instead issuing relatively unimportant, often procedural decisions.  It is unclear if the Justices will take the same approach in any of this Term’s major, closely divided cases.


Update: Brad Friedman with the definitive piece.
Posted by PDiddie at Saturday, February 13, 2016

As you know, there is no god to be merciful to him, no hell for him to escape, and no soul to be tormented. He lived a long life, with no discriminatory burdens and no physical or mental handicaps. True people of the left will engage in no faux mourning for him, as I work on my own blog post about that.