Ted Cruz is NOT a pussy

Trust me on this, Donald.  He's just as big a bully as you are and he's got the mission-from-God stamp of approval to show for it.  Jeebus Christ on a Christmas tree crutch, what a pair of wads.

They're your co-leaders for the GOP nod after today, though, with the media piling back on the Trump bandwagon for ratings again, including those sad sacks at MSNBC.  That network's political coverage has been an absolute disgrace so far, and that's to say nothing of their shilling for Hillary.

John Kasich -- and not Chris Christie -- may pull an upset for second place, according to what I'm reading.  Even Jeb! may see a slight erection resurrection.  And when the Big Dog starts talking dirty, you know that the Clintons are mad at everybody again.

Update: read the Vox advance; they seem to be hitting the mark every time.

Here's your funny for today: the same two guys who heckled Jeb! are spotted in the camera shot behind Hilz wearing "Settle for Hillary" shirts. 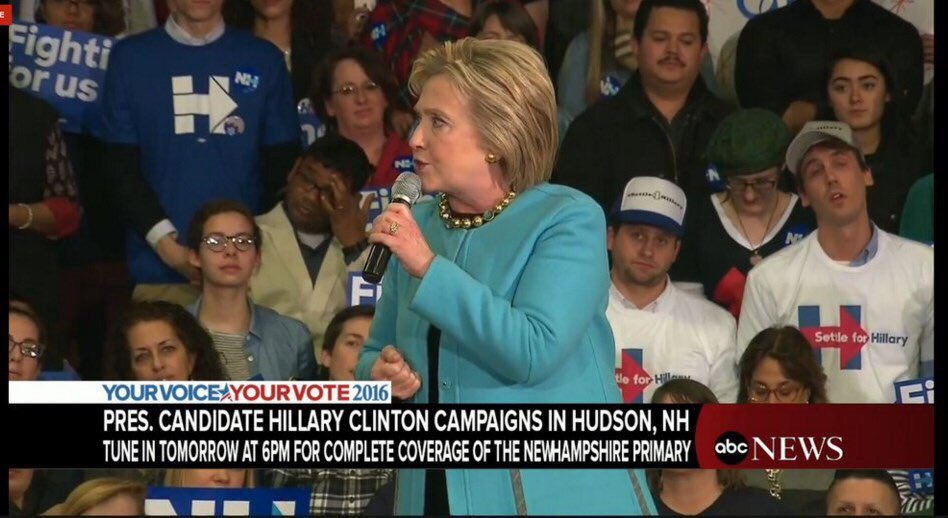 Enjoy your Fat Tuesday.  I know that I am.
Posted by PDiddie at Tuesday, February 09, 2016

Until we see differently, per Iowa, I'll guesstimate you're shooting too high on Trump. I'm putting him at 25 percent, giving that underage primarily to Cruz and Rubio, and not feeling Fat Bastard breaking 10 percent, though I see the rest of the general gridlock you do: