Last night was substantive, calm, rational, and revealing.  This evening we're probably back to the shouting and hand-waving and accusations and such.

The next Democratic debate is tonight at 9 pm Eastern. It will take place at the University of New Hampshire in Durham, and will air on MSNBC. An online live stream will be available at MSNBC.com.

This debate wasn't on the sparse original list of six that the Democratic National Committee approved. But when NBC and the New Hampshire Union Leader decided to host an "unsanctioned" debate between the Iowa caucuses and New Hampshire primary, without the DNC's approval, Hillary Clinton — who seemed to regret her allies' role in limiting the debates, and hoped for an opportunity to shrink Bernie Sanders's large lead in New Hampshire — said she'd show up. The Sanders team then used the opening to get Clinton to agree to three more debates in exchange for his own attendance.

The upshot is that this will be the first face-off between the two candidates since they fought to a virtual tie in the Iowa caucuses. And it will also be the first featuring only Clinton and Sanders, since Martin O'Malley suspended his campaign Monday night.

Again from last night, I saw it as among Bernie Sanders' finest public moments.  He simply communicates with a sincerity and a humility that Hillary Clinton cannot.  She didn't really have too many bad moments; it's just that she comes off as your standard 'say anything' politician when you have the opportunity to compare the two closely.

This debate comes just five days before the February 9 New Hampshire primary — a primary Bernie Sanders is expected to win, since Clinton has trailed him in state polls for most of the past six months.

Weirdly enough, this seriously raises the stakes of tonight's debate for Sanders. Because if he loses New Hampshire to Clinton, it will be interpreted as a major blow to his campaign. The Granite State is a really good fit for Sanders both geographically (he represents neighboring Vermont) and demographically (it's overwhelmingly white, and white Democrats are more likely to back him). And the next states to vote — Nevada and South Carolina — seem to favor Clinton.

That's why Clinton was so eager to add this debate — to give her the chance to turn her numbers in New Hampshire around, and perhaps even pull off an improbable come-from-behind victory there like she did in 2008. If Clinton triumphs in New Hampshire, she could deflate Sanders's campaign early, and roll to victory elsewhere.

She'll roll no matter what happens tonight or on February 9.  I've been saying it since the summer. 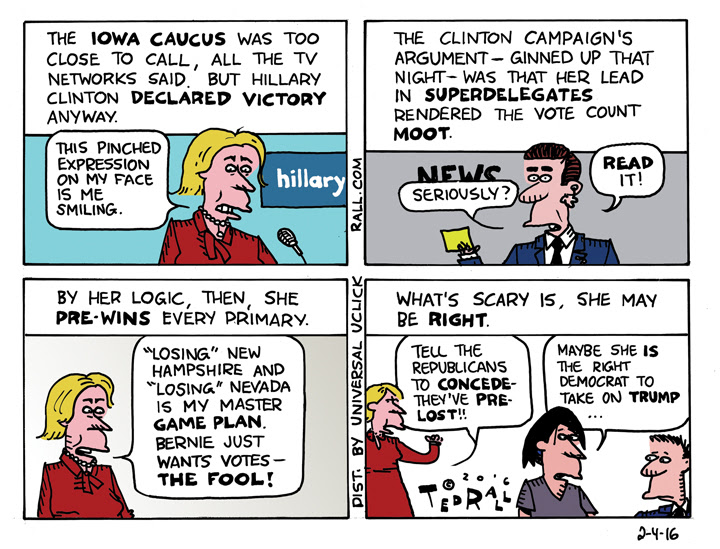 It's nice to have hope and to be inspired, but the deck is stacked too strongly against him.  Maybe I'm just cynical after watching politics so closely for the past decade-plus, and after getting my hopes up with people like Howard Dean in 2004, David Van Os in 2006, John Edwards in 2008, and more recently Wendy Davis in 2014 and Chris Bell in the last municipal cycle.

Unsurprisingly, then, the contest between them has been getting more tense. In recent days, Sanders has more aggressively questioned Clinton's progressive credentials, criticizing her for raising money on Wall Street and voting for the Iraq war. And Clinton has been been increasingly focused on gun control, one of the few issues she has a more liberal record than Sanders on — while sowing doubts about Sanders's electability. Expect all these topics to come up quite a bit tonight.


Since New Hampshire is a primary, at least we won't have any coin flips.

I used to be a big, big proponent of caucuses, but not any more.

I await the butterfly ballot caucus with great interest. :)

And, beyond no coin flips, we we (hopefully?) won't have any shenanigans with a state Democratic party stonewalling clarity, openness and finality on elections.