The Texas Progressive Alliance reminds you to get out and vote, starting tomorrow, in the 2016 primary as it brings you this week's roundup. 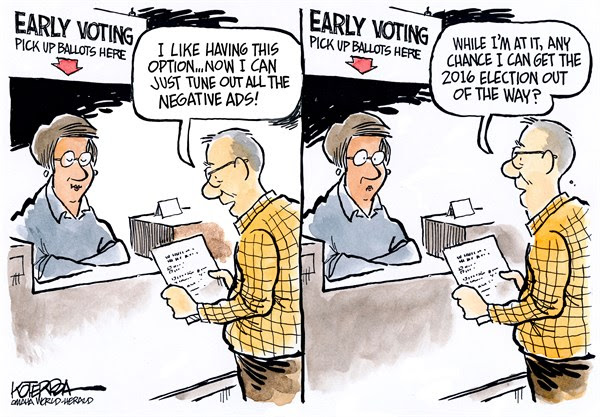 Off the Kuff published interviews with three candidates vying to reclaim HD144 for the Democrats.

It felt as if there was a turning point in the last Democratic presidential candidates debate, and PDiddie at Brains and Eggs has the details.

CouldBeTrue of South Texas Chisme is appalled that Texas Republicans are giving $.5M taxpayer dollars to help Blue Bell after they spent years delivering deadly listeria to its customers.

SocraticGadfly asked that we not have any unseemly faux mourning over the death of Nino Scalia.

The Lewisville Texan Journal has the early voting details for that city.

Egberto Willies has video of the NBA All-Star Celebrity game's MVP telling America it could learn something from Canada. ... right before ESPN cut him off.

Neil at All People Have Value took a picture of a very cold Ohio River, at Cincinnati. APHV is a part of NeilAquino.com.

And Stace at Dos Centavos filed a review of Los Texmaniacs, appearing at Houston's premier dive bar, Under the Volcano, in Rice Village.

Culturemap Houston had the early confirmation of the University of Houston' hosting of the February 25 GOP presidential debate.

Moni at TransGriot reminds Republicans that they lost, Scalia is gone, and Obama gets to pick his replacement.

The Rag Blog is being hopeful about a Sanders-Trump general election.

The state of Texas is charging ahead with its plan to redesignate immigration lockup facilities as childcare centers, according to the Houston Press.

Lone Star Ma focused on the 7th of the United Nations' new Sustainable Development Goals: Ensuring access to affordable, reliable, sustainable and modern energy for all.

D Magazine asks whose fault it is when a pedestrian gets hit by a car.

Doyen Oyeniyi searches in vain for an actual "sanctuary city".

The Dallas Observer does not like the way its mayor talked about the now-banned Exxxotica convention.

Keep Austin Wonky examined how city council there can use the 2016 presidential election to enhance Austin’'s mobility.

Finally, the TPA congratulates the Rivard Report for achieving its goal of becoming a non-profit.
Posted by PDiddie at Monday, February 15, 2016