I AM THE MEDIA.

There will be some words blogged later. 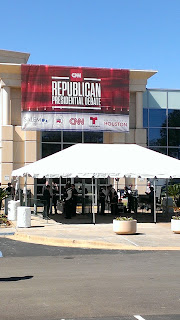 Underneath those tarps at the entrance to the media center, there are about 8-10 strapping young men checking bags and backpacks.  They are wearing "Secret Service"- emblazoned bomb vests. Additionally, there seem to be a thousand HPD officers, a hundred of those with bomb-sniffing dogs, swarming the U of H campus.  Cullen Boulevard is blocked and barricaded to cars and pedestrians. Super Bowl security has nothing on the RNC. 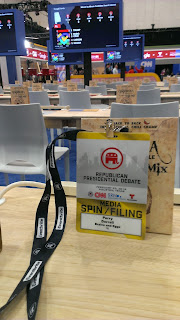 Click on these for larger views; they get a little fuzzy if I post them any larger.  It's time for a new celly with a better camera. 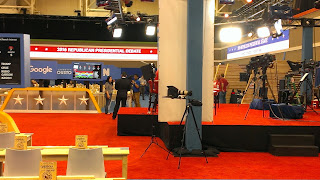 Update: These pictures were taken between 12:30 and 1 p.m. today, and the atmosphere was already crackling with electricity.  These debates are always tense for the candidates and campaigns and supporters, but the nonchalant and cynical seen-it-all vibe from the corporate media lining the bullpen is apparent.  The locals and especially the millennials among them are trying to look serious but they're bubbling over, three hours before kickoff.

There are three hundred of the cheap seats where I am, with the chili mix package and a Google pen and a Cardboard YouTube viewer.  Google fed the mob breakfast, lunch, and dinner.  The only thing that really impressed me so far is when I logged in on the WiFi, and Android instantly updated 16 app drivers on my phone.  Oh, and I need a nap; I've been up since 3 a.m.  Unless somebody does something crazy, no further updates here.  Follow the Twitter feed, top right hand column, and look for the wrap-up early tomorrow morning.
Posted by PDiddie at Thursday, February 25, 2016