Republicans came and stole your healthcare, confirming in the predictable party-line vote the most corrupt Trump lieutenant so far. 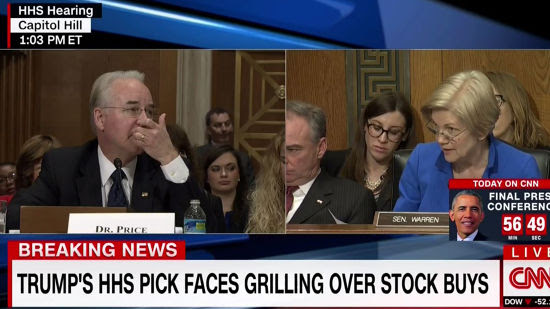 No reason to chew your fingernails, Sec. Price.  It's in the bag.

In a middle-of-the-night vote, the Senate confirmed Rep. Tom Price to be the next secretary of the Department of Health and Human Services. The 52 to 47 vote was along party lines.


Democrats opposed Price, a Republican from Georgia, because he is a key architect of undoing the Affordable Care Act and has advocated making major changes to Medicare. Their suspicions were deepened when it was revealed Price traded health care stocks while having oversight duties of the health care industry. Price has consistently denied any wrongdoing.

Republicans view Price, an orthopedic surgeon, as a champion of free market principles who will guide the repeal and replace of Obamacare, the top legislative priority for President Donald Trump and Congressional Republicans.


Insider trading is of course illegal when anyone does it, and we seem to have returned to the good old IOKIYAR days.  On the bright side, we're beginning to see some significant differences between the corporate Democrats and the Grab-Our-Pussy Party in the Senate.  And if you missed it, the response to Jill Stein's Tweet earlier this week gave the angriest of Donkeys *cough* Dan Savage *cough* another chance to back-kick her about that.

Somebody -- a whole lot of somebodies -- had the point whoosh right over their heads.  Maybe I'll get around to a separate blog post about it, but for now and especially if you'd like to disagree with her statement that "Democrats serve corporate interests", sound off in the comments.  Let's have that out.

Bad things have come in threes this week with Devos and Sessions and now Price.  We still have Rick Perry and few more turds in the pipeline.  Why, we even saw Trump's SCOTUS pick, "Fascism Forever" club founder and Noah/James Horwitz-doppelganger Neil Gorsuch, telegraphing some possible disputes with the president, specifically his Tweets.  I would say he's gaslighting us (read all of this link for the ongoing dynamics) so he can get confirmed.  Gorsuch needs 60 votes, or 8 Democrats, if Mitch McConnell doesn't decide to go nuclear.  I just don't trust the guy (any of them).  Let's note what Gorsuch said, via a Democratic senator behind closed doors, for the record anyway.

Supreme Court nominee Neil Gorsuch told a US senator Wednesday that President Donald Trump's tweets about the judiciary are "demoralizing" and "disheartening."

In a meeting with Connecticut Democratic Sen. Richard Blumenthal, Gorsuch, who's largely been silent since Trump nominated him last week, took exception to Trump calling a federal judge in Seattle a "so-called judge" after blocking the President's travel ban.

"He said very specifically that they were demoralizing and disheartening and he characterized them very specifically that way," Blumenthal said of Gorsuch. "I said they were more than disheartening and I said to him that he has an obligation to make his views clear to the American people, so they understand how abhorrent or unacceptable President Trump's attacks on the judiciary are."

Ron Bonjean, who is leading communications for Gorsuch during the confirmation process, confirmed Gorsuch called Trump's tweet about the "so-called judge" "disheartening" and "demoralizing" in his conversation with Blumenthal.


Words that will certainly have to be explained in greater detail in his confirmation hearing, and we can all see if he can sell his judicial independence as effectively as does the Executive Branch Chamber of Commerce.  That brings us to more of yet another lousy week for President Big Orange Baby, with his Tweets about his now-slapped-down Muslim ban and Kellyanne Conjob's violating federal law by pimping out Ivanka's clothing line after it was discontinued at Nordstrom's, and ... a few more things for the very next post.
Posted by PDiddie at Friday, February 10, 2017

Well, somebody in Beijing threatened to kick Trump in the nads or something, as he swallowed deep and accepted the "one China" policy.

I look like Neil Gorsuch? That's a new one, Perry.

Dead ringer (if yoou were to frost your hair a bit). In fact, I'd say you look more like him than you do your dad(who also looks a lot like him).

Not so new; almost a month old. I appreciate your reading and commenting but I do wish a handsome young man such as yourself had better things to do on a Friday evening during March.

Do you think Lillie Schechter will be elected tomorrow?

My antivirus says this link is malicious content. What are you trying to say?