Trump's State of the Union

Maybe he'll speak some French since it's Fat Tuesday. 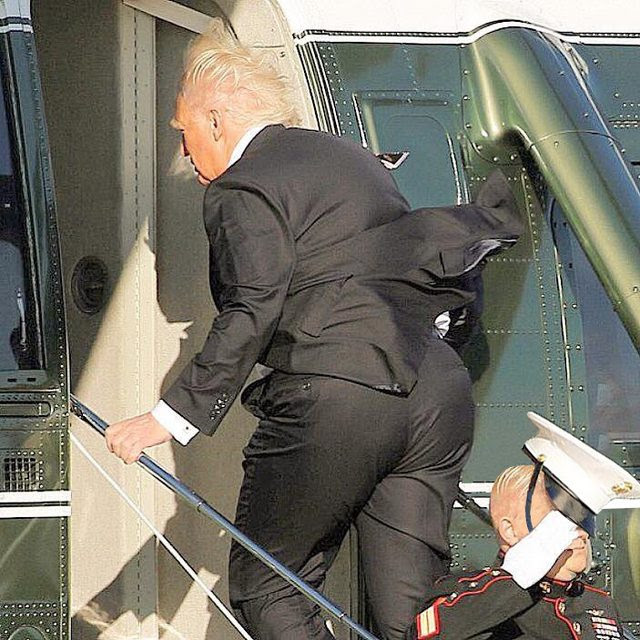 Lawmakers, investors and the American public want President Donald Trump to provide some much-desired clarity on his policy agenda with his first address to Congress on Tuesday.

Six weeks into his presidency, Trump is under increasing pressure to answer core questions about how he’ll deliver on his promises to bring fundamental change to U.S. health-care policy, the tax system, defense spending and immigration. Explanations have been elusive so far, and his prime-time speech could determine whether markets -- and voters -- believe Trump has a firm handle on his job.

He doesn't.  He does seem to have a tight grasp on the nether regions of 229 Republicans in the House of Representatives, though.

Trump sought to provide some answers on how his proposed budget would pay for a 10 percent increase in spending on defense without cutting “entitlement” programs such as Social Security and Medicare, which make up about two-thirds of the $4 trillion federal budget, in an interview with Fox News that aired Tuesday.

“I think the money is going to come from a revved-up economy,” Trump said. The U.S. gross domestic product will be “a little more than 1 percent and if I can get that up to 3 and maybe more that’s a whole different ballgame,” he said.

Yay trickle down!  Trump and the GOP have hit the wall on the first turn trying to yank Americans' healthcare insurance out from under them, however.

Trump has shown signs of breaking from congressional Republicans on Obamacare. Governors meeting in Washington on Saturday were presented with an analysis of a House Republican repeal bill that suggested many people may lose their insurance under the measure and states would lose billions of dollars. Trump has previously vowed that no one would lose their coverage.

There are divisions among congressional Republicans over whether a replacement plan should subsidize insurance, and if so how generously and how to finance such a policy. Trump may use his speech to push one side to compromise, particularly since it’s clear he’s getting impatient.

Virginia Governor Terry McAuliffe, chairman of the National Governors Association, said Trump asked Health and Human Services Secretary Tom Price when a bill would be proposed during a meeting Monday with the governors group. Price told Trump a bill would be delivered in three or four weeks.

“Trump said, ‘I want it in two.’ Or something like that,” McAuliffe said.

Who knew this could be so complicated?  Not Trump.

In reality, I think that literally anyone who has ever worked on health care policy at the state or federal level could have told Trump that. If Trump wanted to stick to his usual aversion to experienced public servants, he alternatively could have asked anyone who’s worked in the private health insurance or hospital industries, and they would have told him that it’s complicated.
It was a weird, somewhat inconsequential thing to say. However immediately after, Trump gave us a good example of how his general lack of knowledge of policy issues really matters.
Referring to his own enthusiasm for tax reform, Trump explained, “I can’t do it until we do health care, because we have to know what the health care is going to cost and — statutorily — that’s the way it is. So for those people who say, ‘oh, gee, I wish we could do the tax first,’ it just doesn’t work that way. I would like to do the tax first.”
Trump is wrong about this. There is no statutory requirement for him to do health care before he works on tax reform. What’s at issue is simply Paul Ryan’s legislative strategy. Ryan wants to pass a tax reform plan with a party-line vote, which means he needs to use the budget reconciliation process to avoid a Senate filibuster.

America is not going to be winning more wars with a Commander-in-Chief this dense.
Posted by PDiddie at Tuesday, February 28, 2017