Like I said before, skip a blogging day and it's hell catching up.

-- Mike Pence broke the tie, and thus we now have a Dominionist who knows nothing about, indeed is opposed on religious grounds to public education, in charge of public education.

How long do you think it will be before your children and grandchildren are kneeling in prayer following the National Anthem and the Pledge of Allegiance?  How long before intelligent design is taught in favor of evolution, like it is in church schools?  How long before -- never mind.  The answer is that it won't be long at all.

The whole reason private education came into existence is so that religious dogma wouldn't be forced on kids at taxpayers' expense.  Conservatives have evolved to the point that the answer is to strangle public schools.

-- Elizabeth Warren was silenced by Senate Republicans because she dared read a letter from Coretta Scott King criticizing Jeff Sessions.  During Black History Month.  The power play is backfiring on Mitch McConnell.

Republicans can't help being racists; it just comes so naturally to them.  Of course it might be sexist instead.  My guess is it's both. 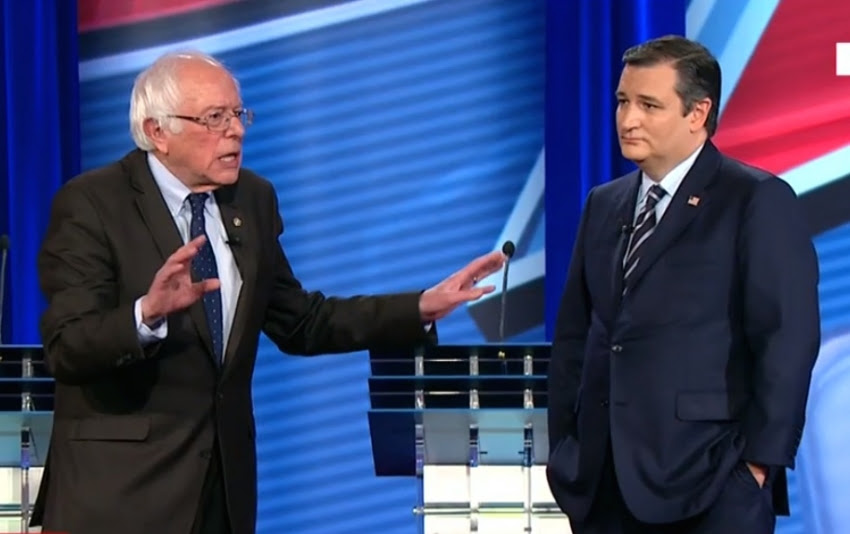 -- Bernie Sanders and Ted Cruz had a debate on healthcare.  Generally speaking, both men lost.  Cruz because of his typical smarmy, condescending style and lack of facts; Sanders because ... well, he's always talking at us and not with us.  Cruz can at least feign empathy.  Update: Awkwardly.

Sanders doesn't really believe in the ACA; he's a proponent of 'Medicare for All' or universal single payer.  But he has to play this goddamned Democrat game of supporting some half-measure that until recently had Obama's name on it.  Because he doesn't want to rile up the Shrillarians too much.

This is the dilemma when you're trying to foment a revolution inside the castle walls.  And also why that never succeeds.

-- Trump offered to ruin an unnamed (but identified by gender) Texas state senator who has introduced legislation eliminating asset forfeiture to law enforcement by suspected criminals.  If you rule out Konni Burton on the basis of "him", they're talking about one Democrat -- Chuy Hinojosa -- or Bob Hall or Don Huffines, members of the Senate's Tea Party caucus.

Grits was first to see the irony.

Meanwhile, conservative groups like the Texas Public Policy Foundation, the Heritage Foundation, the Institute for Justice, and others have been pushing forfeiture reform hard for the last few years. So this is an area where Trumpian authoritarianism finds itself at odds with traditional, property-rights rooted conservatism and small-government distrust of government power.  There are dozens such fracture points emerging where Trumpism  diverges from traditional conservatism, so this issue arises as part of a larger debate: Will there continue to be a place for small-government conservatism in the Trumpian era? D.C. Republicans probably cannot resist his Big-Government siren song. But here in Texas, perhaps those values are a little more deeply rooted. Burton's SB 380 would be a good opportunity to express them.


Update: The Statesman feels confident in naming Bob Hall as the object of Trump's scorn.

Let's hope some of our corporate media Capitol bureau contingent can formulate a pointed question to ask a few senators.  Something like: "Yes or no on SB 380?"

-- Two steps for free and fair elections; one backward ...

The same day that Mike Pence became the first Vice President in American history to be summoned to break a 50-50 split in a Cabinet confirmation vote for Betsy DeVos, members of the Committee on House Administration advanced two pieces of legislation to repeal laws that safeguard the integrity of elections.

The committee, chaired by Mississippi House Rep Gregg Harper, voted 6-3 along (shocker!) partisan lines to advance the Election Assistance Commission Termination Act, ThinkProgress reported. This act of termination would kill off the bipartisan commission that was formed in the wake of the debacle of the 2000 election to ensure that states were making it easier and more transparent to vote. It also oversees voting machines to make sure they don’t get hacked. According to its government website, the commission “is charged with supporting state and local election officials in their efforts to ensure accessible, accurate and secure elections.”

The commission was designed as oversight for the implementation and compliance with the Help America Vote Act. It’s worth noting that Republicans held the White House, the House and 50-50 control with the VP’s tie-breaker in the Senate when HAVA was signed into law in October, 2002. This goes to show how radically far the GOP has declined in its moral compass in the last 15 years. Republicans are voting to repeal legislation that their party wrote and enacted the last time they held unified control of the federal government.

In blunt and highly critical language, a federal judge on Wednesday blasted the Federal Election Commission (FEC) and issued a ruling that lays the groundwork for removing the primary obstacle to a serious independent running for president in 2020.

In her 28-page decision, U.S. District Court Judge Tanya Chutkan said that, in rejecting a complaint by Level the Playing Field, a group seeking to change the rules for participation in the final fall debates, the FEC had acted in a manner that was “contrary to law.”

The FEC was the defendant in the case, but the real villain in the story is the Commission on Presidential Debates (CPD), a private organization that is dominated by Democratic and Republican party stalwarts.


You might recall that a different federal judge ruled against the minor parties trying to crack open the debates last August, which sealed our crappy duopolist fate (again).

The CPD’s rules – mainly the 15% threshold late in the election cycle for admission — have effectively excluded independent candidates from participating in the September and October debates, thus denying them the chance to become president — even though polls clearly show Americans want that choice.


Fix it or the plaintiffs will be able to fix it themselves, wrote the judge.

In one important passage of her opinion, the judge referred to evidence submitted by the plaintiffs and wrote:

“Given these expert analyses, the evidence that since 1988 only one non-major-party candidate, Ross Perot, has participated in the debates, and only then at the request of the two major parties, and the evidence that the CPD’s chairmen and directors are actively invested in the partisan political process through large donations, the court is perplexed that the full extent of the FEC’s analysis consisted of no more than a footnote stating that even if the fifteen percent threshold excluded third-party candidates, this still did not indicate that it was not an objective criterion. This begs the question: if under these facts the FEC does not consider the fifteen percent polling criterion to be subjective, what would be?”


The judge concluded by ordering the FEC to “reconsider the evidence and allegations and issue a new decision consistent with this Opinion within 30 days.” Otherwise, she wrote, the plaintiffs “may bring…a civil action to remedy the violation involved in the original complaint.”


STOP and then GO, democracy!

-- Democrats in Congress are at least trying to remove Steve Bannon from the National Security Council seat he secured for himself.

While national security lawyers argue over whether Steve Bannon’s appointment to the National Security Council is legal or not, members of Congress are pushing back to close whatever statutory loophole even might render legal what is clearly a violation of long-standing national security norms.

In one of last week’s most under-reported stories in the major press, bills were introduced into both the House of Representatives and the US Senate this past week, each designed to clarify the composition of the NSC and Principals Committee, ensure Senate oversight over appointments, and, in the case of HR 804, “To Protect the National Security Council from Political Interference.” As of today, the House bill has 85 co-sponsors.


No GOP signatories yet, and Trump could veto it if it came down to that, but this is more meaningful than another protest or petition or phone call to a full voice mailbox.  Cruz and Johns Cornyn and Culberson ought to be able to go along with the premise that a Democrat could do this in four years, which is why they should act now.

Send an email to your Congress critter through the contact form on their website (the best).
Posted by PDiddie at Wednesday, February 08, 2017

Or me wanting a media yes or no question on the BSA and the bathroom bill.

W/r/t to the bathroom bill, that's going to die in some House committee unless Greg Abbott suddenly decides to support it. And I do not believe that he will.