Every president gets humbled in office, but never as early or the way in which all of the defeats and bad news piled up Thursday for Donald Trump. Indeed, here's what took place on Trump's 21st day on the job:


They've also got the entire three-week play by play for you there.  And it didn't include a review of Conjob's "counseling" apology to Trump for violating federal laws (Colbert runs 'em down) by shilling for daughter Ivanka's fashion line, no longer available at Nordstrom's.  Unlike Boeing, Lockheed, the various auto manufacturers, and the media companies who've been raked over the coals by President Brand Manager, Nordstrom stock gained strongly after his Twitter tantrum.

Facing lawsuits galore on every executive order he has signed (I'm so old I remember when EOs would torment Republicans; like, a month ago), Trump experienced the highest expression of legal humiliation to date in having his Muslim ban rejected unanimously by a three-judge federal appellate panel yesterday.  The executive summary:

President Trump reacted to the 9th Circuit's ruling with this tweet: "SEE YOU IN COURT, THE SECURITY OF OUR NATION IS AT STAKE!" NBC's Pete Williams reports that the administration could very well make a quick appeal, perhaps to the U.S. Supreme Court, as early as today. More on the ruling from NBC News: "'Federal courts routinely review the constitutionality of — and even invalidate — actions taken by the executive to promote national security, and have done so even in times of conflict,' the judges wrote. The appeals court panel also dismissed Justice Department arguments that presidential decisions about immigration policy related to national security are unreviewable. 'There is no precedent to support this claimed unreviewability, which runs contrary to the fundamental structure of our constitutional democracy,' the judges wrote."


Don't anticipate an already overworked eight-member SCOTUS to take up the question, which would leave the 9th Circuit's ruling intact.  And if Neil Gorsuch is telling the truth, expecting him to reinstate the ban as the new ninth Justice at some future point in time might be a stretch.  And that would be because Trump has vastly over-reached.  But could he be doing so deliberately?  The most interesting legal POV comes from MarketWatch's Brett Arends.

Contrary to what you may hear, the U.S. Court of Appeals for the 9th Circuit on Thursday did not — repeat: did not — repudiate Trump’s legal right to suspend selective immigration. It just repudiated the bungling incompetence with which his administration made the case.

Yes, the three justices ruled: “Courts owe substantial deference to the immigration and national security policy determinations” of the president and Congress. That is “an uncontroversial principle that is well-grounded in our jurisprudence.” Indeed, as I pointed out earlier this week, it is well established that the president has very broad discretion to suspend immigration where he deems it necessary.

But that was not what the Trump administration claimed. Instead, they argued that they were actually above the law, the Constitution or legal review.

“The Government has taken the position that the President’s decisions about immigration policy, particularly when motivated by national security concerns, are unreviewable, even if those actions potentially contravene constitutional rights and protections,” the justices wrote with disbelief. They added: “There is no precedent to support this claimed unreviewability, which runs contrary to the fundamental structure of our constitutional democracy.”

You couldn’t make this up. Trump is now raging at the judges. But the blame for this fiasco lies entirely with him, and no one else.


This is so valuable to understand that I'm excerpting long.

All the administration had to tell the appeals court was that it had rational reasons for suspending immigration from the seven specific countries. Even with national security details “redacted,” the president’s lawyer could have laid out a simple case. Call it Iraq War II. “Intelligence sources say ... intelligence sources warn ... We have received intelligence ...” And so on. He could have kept it vague and menacing. He could have made it up. So long as he offered something. All the courts needed was an excuse.

The justices were very unlikely to second-guess a president’s national security intelligence. They don’t consider that to be their job, they don’t want to do it, and they know how dangerous that could be — for the country and, indeed, for the standing of the courts.

Legal precedent strongly suggests that they’d support the president so long as he could reassure them he had a rational basis for his action.

But that’s not what Trump’s lawyer did.

Instead, August Flentje, a lawyer for the Trump administration, spent most of the hearing arguing the president’s actions were beyond review — and that individual states had no “legal standing” to challenge his executive order either. That was another stupid and fruitless argument, especially as Washington, the state in question, had shown clearly how it was affected.

Trump’s refusal to offer any kind of rational excuse for his immigration ban produced a double whammy. First, it insulted the judges by saying they had no right to review his actions. Second, it left him wide open to a First Amendment challenge. As the judges noted, there was plenty of Trump administration rhetoric suggesting this might be an unconstitutional ban on Muslims. Trump’s refusal to offer an alternative, rational explanation for the executive order was therefore a real problem.


Arends is offering some advice here to the Trump legal team for the future SCOTUS hearing.  But before he gets to reminding them that the law is on their side if they will only argue it correctly, he lays down the smack that they have already tilted the odds against themselves.  And also issues a warning for what may lie ahead if Trump is playing a long con, in hope or expectation, of a future terrorist attack on the US.

But maybe none of this should be a surprise.

What should we expect from a president whose special counselor hawks Trump family merchandise from the White House podium, and whose chief of staff recently heralded the arrival of our “new King”?

I’ve gone blue in the face over the past 20 months reminding MarketWatch readers that, no, Donald Trump was not a “successful businessman” or a “successful executive” in the traditional meanings of those terms. He is a serial bankrupt. He inherited a fortune from his dad, and made more only by scamming people, and sticking it to his bondholders and stockholders. Many of you would be rich, too, if you had his start, his greed, and his lack of ethics.

It would be genuinely interesting to see a true business leader take on the role of president. But Donald Trump is no Steve Jobs, no Henry Ford, no Bill Gates, no Walt Disney, no Warren Buffett. He is no value creator, no genius and no leader. He is a con artist, a huckster, the equivalent of a hawker of used cars or subprime derivatives. His skills are chutzpah, greed and a cynical, rat-like cunning.

The law still favors his ban on immigration. The question is going to be whether his administration makes a real legal argument when it goes, as it surely will, to the Supreme Court.

My original take was that Trump had merely bungled his case. But I could be wrong — very wrong.

I mean what I say about his “rat-like cunning.” Trump is a master manipulator. It is actually plausible that he screwed up this lawsuit deliberately. Trump and Trumpism thrive on conflict, paranoia and resentment. News that a bunch of “fancy-pants, elitist lawyers” at the 9th Circuit — in San Francisco, no less — has thwarted his immigration ban is great politics for him. It whips up his base into fury, and encourages them to look to him, even more, as their “protector” against the “elites.”

And, without wishing to be ghoulish, just imagine if an immigrant from one of these seven countries were by remarkable coincidence to cause a terrorist attack. Trump would look like a hero to his fans. His opponents would look terrible.

Would Trump do this deliberately? Would he play politics with people’s lives in order to consolidate his regime’s grip on power?

Well, that’s what Vladimir Putin did. And we know how much Trump admires Putin.


Nothing to add, except this: we're one terrorism event in this country removed from Cheetolini declaring martial law, curbing every expression of free speech, executing the most vigorous prosecution in the harshest ways of those who would practice their dissent and resistance (such as your humble reporter here and cartoonists like Ted Rall), and other Murphy's Law-like consequences of neofascism that ought to have already curled your hair. 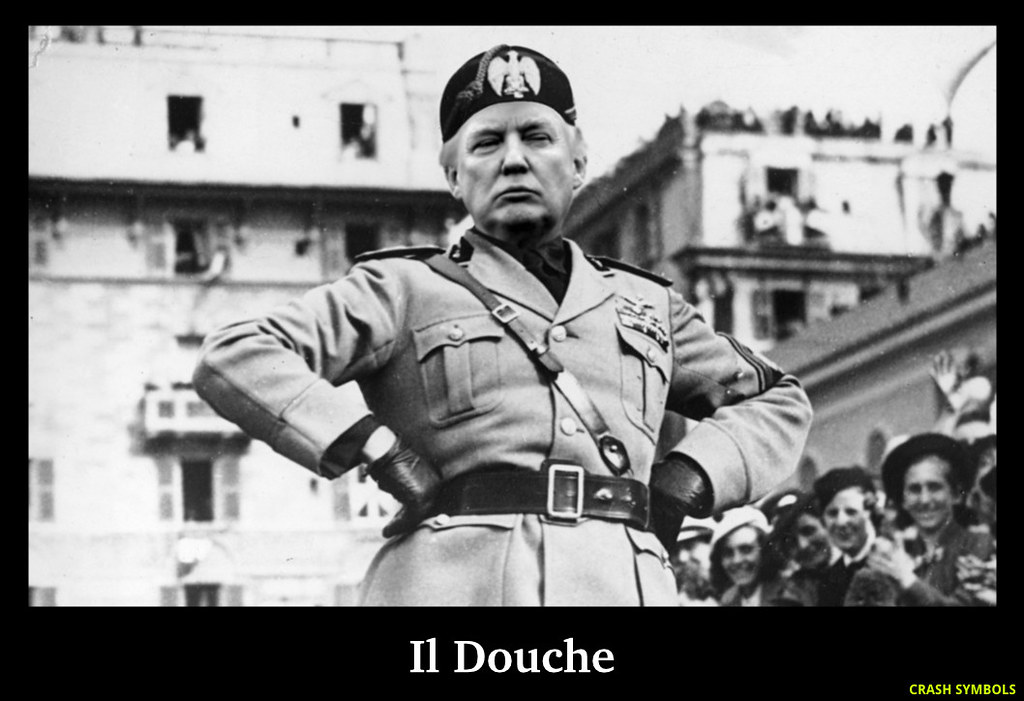 Will some Republicans start resisting soon?  There aren't enough Democrats, as we have seen.
Posted by PDiddie at Friday, February 10, 2017