The trouble with documenting the atrocities in TrumpWorld is that if you skip a day, he's already on to the next one.   Same goes for his propagandists. 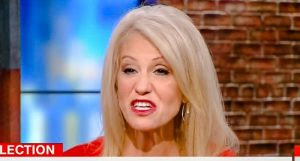 #BowlingGreenMassacre trended all day and into the night, spawning a "We Are All Bowling Green" vigil for victims and a spoof website, courtesy the ACLU (which had previously shattered donation records).  Bowling Green Massacre survivors are now marking themselves safe on Facebook.  So with all of that snark in full bloom, it's no longer timely -- and maybe a little Godwin-esque -- to point out the disturbing similarities between Kellyanne Conjob and the original Minister of Propaganda, Joseph Goebbels ...

... but we may not have to wait long for her next alternate fact.  Tomorrow is Sunday, the a.m. talking heads can't stop putting her on despite her whining about not getting any sleep for months, and even with some big football game happening, she -- or some other needy attention-grabber in the two-week-old administration -- isn't going to be able to tolerate having the spotlight shining elsewhere besides on them.

Hat tip to a fatigued Field Negro, who worked in a mention of Trump's doctor and his reference to President Hair Furor's male baldness pills, and their being implicated in sexual dysfunction and depression, along with Howard Stern's worry that Trump is, you know, appearing mentally unstable.

So if we can get him out of office before Steve Bannon convinces him to start a war with China ...
Posted by PDiddie at Saturday, February 04, 2017