These nominees and this process, tho...

-- I blogged about SCOTUS potentials this time last week, and except for Trump's "Apprentice"-like charade, there's nothing new to report.  Except for this.

"The reality is that to the best of my knowledge (Judge Thomas Hardiman) never left the state of Pennsylvania," White House spokesman Sean Spicer said Tuesday night after the announcement. "He never was in DC, nor did he ever leave the commonwealth."

The Trump administration was taking extraordinary measures to build suspense and keep the final selection for its Supreme Court nominee under wraps for as close to the announcement as possible. Hardiman and Neil Gorsuch, both federal appellate judges, were the established favorites.

White House sources acknowledged Tuesday night they left the impression with reporters that he was coming to Washington. Hardiman appeared to play along. One source said Hardiman was given the sense that there could be a spot for him should another vacancy open up.

After he was seen leaving his Pittsburgh home, a CNN producer last saw Hardiman again at a highway gas station more than 100 miles east of Pittsburgh in the direction of Washington.

But earlier in the day, sources told CNN that both finalists were being brought to Washington ahead of Tuesday's White House announcement.

One source said that Gorsuch was told it was likely him. Those close to the process warned that until it was announced, Trump could change his mind.

"He likes a contest," one person close to the process said of Trump.

Two packets of briefing materials were being prepared to give senators Tuesday night: Gorsuch and Hardiman. But one person said the "Gorsuch packet" was full and complete, while Hardiman's was little more than biographical.

One person close to the process said Trump doesn't view runner-up as a bad thing. "There will be other openings on the court, so the person not picked will be runner-up," this person said.


I didn't ride along with the farce by watching the teevee, and Tweeted once just a few minutes prior to the announcement.  Homie ain't gonna play like that in the future, either.

-- I'll just keep looking ahead, now with the latest on the Treasury nominee's foreign money... 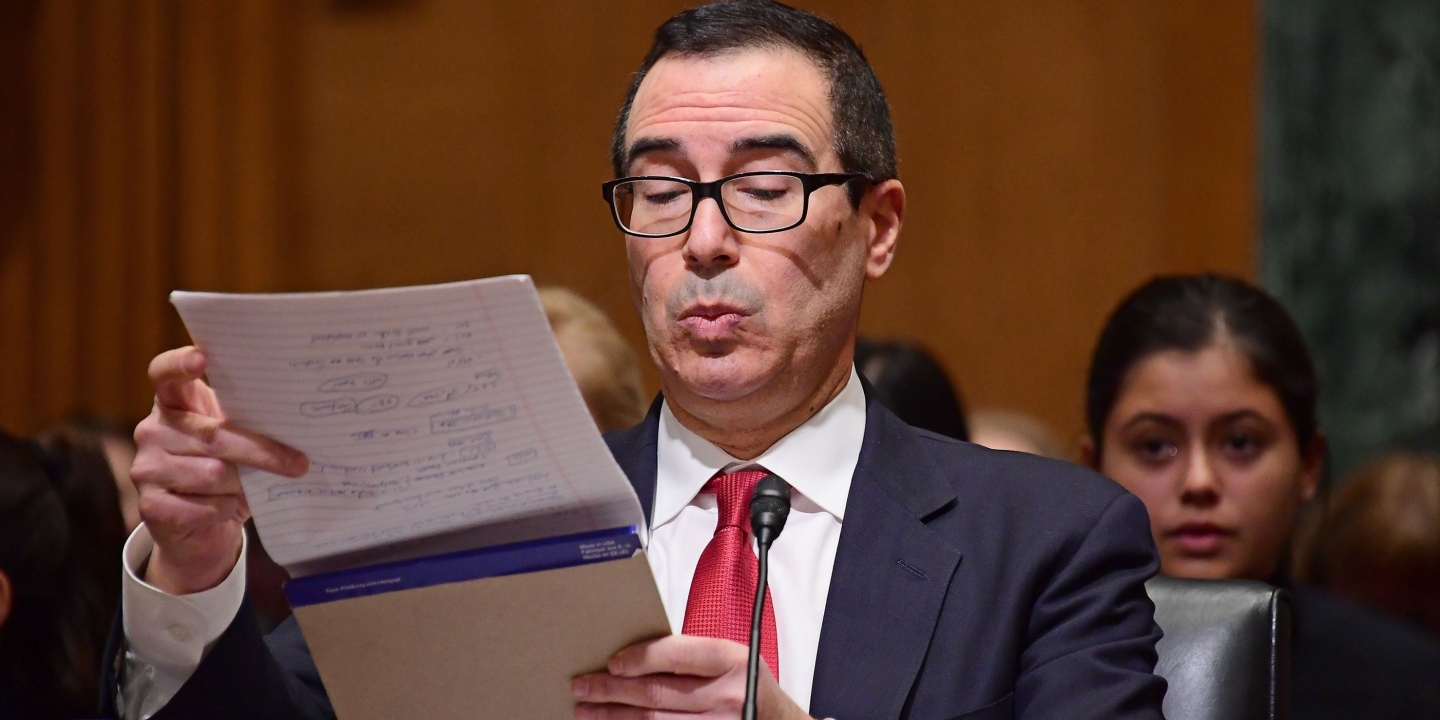 Senate Democrats are raising questions about whether Steve Mnuchin, President Donald Trump's treasury secretary nominee, deliberately misled lawmakers at his confirmation hearing. The concerns center on the extent of foreign investment in a series of finance entities Mnuchin helped manage, including one based offshore in the Cayman Islands ...

The focus has trained on a series of finance entities, all offshoots of the hedge fund run by Mnuchin up until he was selected as Trump's pick to be the country's economic point person.

Asked specifically about the investment makeup of the offshore entity during his hearing, Mnuchin repeatedly said it was created to provide opportunities for pension funds and non-profits to invest. There were also "a small number of foreign investors," Mnuchin told lawmakers.

But the offshore entity and a series of other finance vehicles, some of which weren't originally disclosed by Mnuchin during the financial disclosure process, hold gross assets of more than $240 million, according to an SEC filing reviewed by CNN. Significant percentages of each were held by foreign investors, according to the filing, and one was 100 percent owned by foreign investors.

Mnuchin's failure to initially disclose his relationship with the funds, along with his minimizing the scope of foreign investment in them during the hearing, has Democrats questioning whether it was part of a deliberate effort to steer them away.

"Misleading -- and that's the most charitable way you could say it," Sen. Ron Wyden, the top Democrat on the Senate Finance Committee, said of Mnuchin's explanation during an interview. "You walked away thinking that almost the only people were churches and pensions (investing in those entities.)"


There's also evidence that Mnuchin has lied to the Senate committee about one of his company's robo-signing on mortgage contracts.  Does perjury count as a crime in Trumpland?  Can Democrats stop -- or God forbid, delay -- this nominee?  How they stand up to Jeff Sessions is probably key.

-- How about Betsy DeVos and her plagiarism?

Betsy DeVos, Donald Trump's Education Secretary nominee, appears to have lifted quotes in at least two instances in written answers submitted to the Senate committee tasked with approving her nomination.

After DeVos' confirmation hearing was limited to one round of questions by Sen. Lamar Alexander, chairman of the Senate Committee on Health, Education, Labor and Pensions, Democrats submitted hundreds of questions to the nominee. In response to a question from Sen. Patty Murray, the top Democrat on the committee, on bullying of LGBT students, DeVos almost directly -- and uncited -- quoted Principal Deputy Assistant Attorney General Vanita Gupta, head of Obama's Civil Rights Division at the Justice Department.


Looks like Obama's team was good for something after all.

"To level an accusation against her about these words included in responses to nearly 1,400 questions -- 139 alone from the ranking member -- is simply a desperate attempt to discredit Betsy DeVos, who will serve the Department of Education and our nation's children with distinction if confirmed," said Goad, who sits on the White House Domestic Policy Council.

Sen. Patty Murray said Tuesday she is reviewing written answers the Michigan billionaire provided to the Senate that may include plagiarized material.

In another instance, DeVos' appears to have lifted language from the Department of Education website.


Do they still discipline kids for copying their homework from someone else?  How about you just report to the assistant principal's office, lady.  Oh wait ...

(DeVos) is also not the first Trump staffing pick to face plagiarism allegations since the President's election.

Conservative author Monica Crowley stepped away from her appointment to a senior communications role in Trump's then-incoming administration after CNN's KFile uncovered multiple instances of plagiarism.

Examples of plagiarism were found in her 2012 book, multiple columns for The Washington Times and her 2000 Ph.D. dissertation for Columbia University. The former Fox New contributor was chosen to be the senior director of strategic communications for the National Security Council.


So it looks like somebody in DeVos' family is going to have to write larger checks to more Republican incumbents in order to keep this con going.

Brave new world!  How's everybody adjusting so far?  Got your shelter built and your fire going?  Ready to go scavenge for food?  Or would you rather keep whining about the Russians, James Comey, Bernie Sanders, and/or everybody who voted for Jill Stein?

You gonna march again this weekend?  Sign a petition to John Cornyn and Ted Cruz DEMANDING they vote against Sessions, or DeVos, or Tom Price or Scott Pruitt (here's your chance, Schumer) or any of the rest of these clowns?  Make a few phone calls to full voice mailboxes?

Maybe you could, I don't know, start thinking about how you might assist in organizing your precinct or something.  Just a suggestion.
Posted by PDiddie at Wednesday, February 01, 2017