The Fourth Reich is already crumbling

-- I was wrong to compare Kellyanne Conjob to Joseph Goebbels last week.  Stephen Miller is, after his appearance on last Sunday's Talking Heads, quite obviously the High Minister of Propaganda. 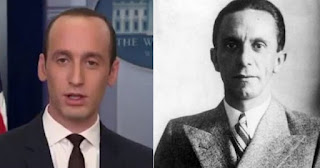 "Will not be questioned".  What a joker.  He must have been referring to Maurice, the pompatus of love, and not President Pussygrabber.

Conjob has her own multiple issues as a serial liar, utter fraud, and just one more white supremacist in a White House full of them.  Contrary to erroneous reporting, however, Trump did not unfollow her on Twitter.  Having exhausted her credibility with the media, is another apology forthcoming or will she be fired resign shortly, as with Michael Flynn?  Morning line favors more twisting in the wind.

-- Of greater concern inside 1600 Pennsylvania is the NSA director's forced exit after his extensive conversations with Russian officials before he was confirmed were revealed, and his subsequent lies to VP Mike Pence about them.  "The Russians" thus reasserts its dominance in the storm of black clouds hanging over Trump.  Matt Taibbi wrote over a month ago-- a week before the inauguration -- that it was past time to find out if the president is being blackmailed by the Kremlin.  (Taibbi got it right about Russia's so-called hacking of the 2016 election, too, ICYMI).  Most Congressional Republicans weren't seeing the need for an investigation; that is, until yesterday.  When the scales have fallen from John Cornyn's eyes, you know it's a problem.  As you might expect, Big John's already holding his bucket of whitewash.

"I think the fundamental question for us is what is our involvement in it, and who ought to look at it," the Kentucky Republican said. "And the intelligence committee is already looking at Russian involvement in our election."

Speaking to reporters, the second-ranking Republican senator was blunt in his assessment of whether the Senate should investigate Flynn.

He did not say, however, whether Flynn should testify before the Senate.

"I think it's symbolic of somebody with a distinguished military career making a bad mistake," Cornyn said.


Better keep your Senate offices on communication lockdown the rest of the month, John.

Some GOP senators like Bob Corker get it; some, like Rand Paul, don't.  Just to correct Senators Turtle and Box Turtle, the fundamental question comes from the Watergate era: What did the president know, and when did he know it?  We already knew that Trump and several of his cabinet have deep and long-standing Kremlin commercial ties, and don't forget that Paul Manafort, Trump's campaign adviser, was forced out of that role last August over his own Russian business affairs.  Trump was briefed on Flynn's Logan Act-indiscretions on January 26, but Pence didn't find out until two weeks later, reading it in the newspaper.  Perhaps this is just a case of plausible deniability for when Pence assumes the presidency after Trump is impeached (or, more likely, compelled to resign).

So was Flynn acting on his own, or did Trump tell him to call Moscow?  That's the high crime and misdemeanor question that needs to be answered.

-- While your corn pops, and as I have recommended previously, go make ya some easy money from across the pond.  The Emerald Islanders are at it again.


Members of Donald Trump’s administration with questionable links to Vladimir Putin could start to emerge like Russian dolls, after the shock resignation of national security advisor Michael Flynn.

Irish bookmakers Paddy Power make it 5/1 that the President is officially accused of Russian collusion on the back of the Flynn scandal.

To illustrate the point, the bookie has today released an advert showing just how close the US and Russia are (attached).

Online, the bookmaker has more than 100 betting specials on Trump, due to extraordinary demand from its customers. Including a range of Russian themed bets that punters are Putin money on.

Féilim Mac An Iomaire, spokesperson for Paddy Power, said: “There was me worrying about 2017 having no major sporting event – I just need to tune into the Trump Show, which is on daily, on Fake News shows everywhere. We’ve been "Russian" out various markets on the President ever since his election – at this rate, we might have to build a whole new website just for him. We’ve a shower of golden bets on Trump, to take the edge off the reality of his reign.”

For the full list of Trump and Russia betting markets, visit.