Both the locals and the nationals are choosing new leaders.  Let's look at the DNC race first, with the AP having already reported that Tom Perez is on the cusp of victory. 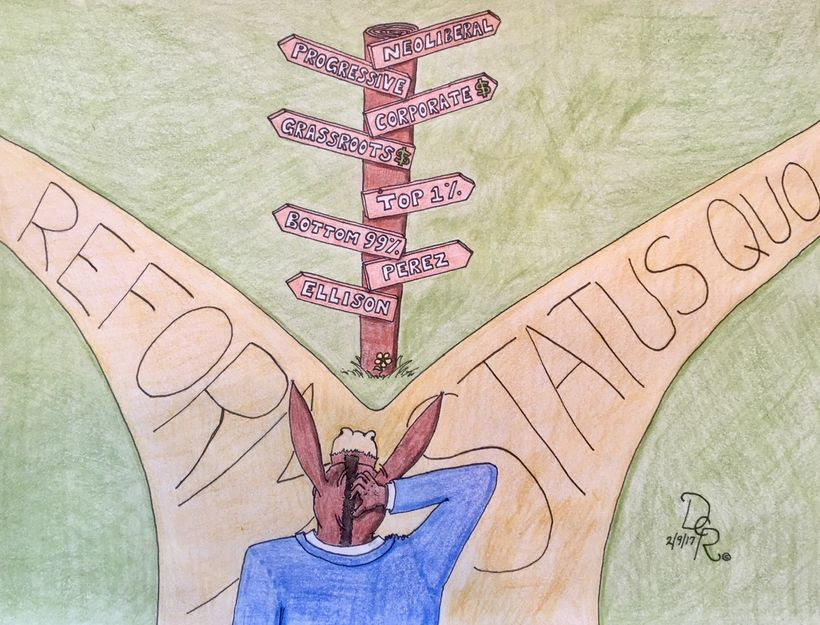 The 447 DNC members will vote during the party's meeting in Atlanta on Saturday, with as many rounds as required for a candidate to get 224 votes. The candidates will meet for a forum hosted by CNN on Wednesday night and spend the next several days wooing the state party chairs, longtime activists and donors who make up the voting members.

Even in the final days, the race remains highly volatile as DNC members try to determine which candidate could best lead a party with no formal hold on power in Washington and no unifying national leader after President Barack Obama's departure from the White House and Hillary Clinton's loss of the presidential election.


Update I: Jaime Harrison has withdrawn and thrown his support to Perez, which all but seals the deal for the former labor secretary and Clintonite.

So it appears that the progressives are going to be turned back again, and as with the primary skirmish last year, are threatening to bolt (again).  It would be nice if that would happen, but after spending half of 2015 and all of last year blogging about my expectations for it, I watched with grim face as Berniecrats slowly marched back into the fold, too scared of a Trump victory to risk a vote for Not Hillary even in Texas, where none of them mattered in the ashes of her polls-defying upset loss.

If I had more time to excerpt and comment at length on the following links, I'd do so.  Since I don't, I leave it to your reading and interpretation to decide if the Democratic Party will choose a path toward relevance or continue off into the weeds.  I'll simply say that no hope and not enough change among the blue sheep seems to be forthcoming.

-- Is the Democratic Party with the Resistance?  This weekend should tell us, says 350.org's Bill McKibben, in his endorsement of Keith Ellison.

-- If the Democrats won't take the risks, it's up to the people.  Duh.

-- The NYT asks if all this protesting is enabling Trump to some degree (maybe, but who really gives AF) and two takes on the activists and the PAC, We Will Replace You, targeting Blue Dogs in 2018 (important but also potentially self-defeating).

-- Using the word 'progressive' properly, DC Rutledge at HuffPo writes an open letter to Bernie Sanders, distilled as: at some point Pops, you've got to get off the D train.  I'm pretty sure it's already derailed, but maybe that's just me and a very small percentage of others.  If you make a move, however, you carry about 25-33% of the Democratic base with you.  So please hurry up and figure it out before this latest movement dies.

Update II: two more things, one from Cait Johnstone trying to get a message through, and one from Matt Taibbi and his book "Insane Clown President".

"The maddening thing about the Democrats is that they refuse to see how easy they could have it. If the party threw its weight behind a truly populist platform, if it stood behind unions and prosecuted Wall Street criminals and stopped taking giant gobs of cash from every crooked transnational bank and job-exporting manufacturer in the world, they would win every election season in a landslide.

"But they won’t do that, because they don’t see what just happened this year as a message rising up from millions of voters.

"Politicians are so used to viewing the electorate as a giant thing to be manipulated that no matter what happens at the ballot, they usually can only focus on the Washington-based characters they perceive to be pulling the strings.

"Through this lens, the uprising among Democratic voters this year wasn’t an organic expression of mass disgust, but wholly the fault of Bernie Sanders, who within the Beltway is viewed as an oddball amateur and radical who jumped the line. Nobody saw his campaign as an honest effort to restore power to voters, because nobody in the capital even knows what that is.

"In the rules of palace intrigue, Sanders only made sense as a kind of self-centered huckster who made a failed play for power. And the narrative will be that with him out of the picture, the crisis is over. No person, no problem.

"This inability to grasp that the problem is bigger than Bernie Sanders is a huge red flag. As  (Paul) Thacker puts it, the theme of this election year was widespread anger toward both parties, and both the Trump craziness and the near-miss with Sanders should have served as a warning. “The Democrats should be worried they’re next,” he says.


Finally, the pathetic TDP chair weighed in with a Captain Obvious understatement yesterday (that would be 2/23, or first posting without updates) which turned laughable and ridiculous within 24 hours, in the context of the Harrison withdrawal/Perez endorsement (Update I above) which he surely knew was coming.  On my observation, this kind of deception, misdirection, obfuscation, etc. is a consistent habit of Gil's.  The only thing he seems to have mastered.


Hinojosa, as I have blogged repeatedly, is anathema to the prospect of Democratic fortunes in the Lone Star State and the most obvious walking, talking symbol of Donkey incompetence found anywhere in the country.  His support of Perez reflects a continuation of the patron neoliberal model which Hillary Clinton and every statewide candidate from Wendy Davis to Jim Hogan has ridden to defeat in years past.  It's the definition of insanity, an executable program in the TDP, and it's been going on since Bill White was the chair in the '80's.

Texas Democrats should be looking to the Harris County example from 2016, a solid set of wins pulled off by their outgoing chairman, Lane Lewis, who is to be succeeded in a vote by county precinct chairs on March 5.  There is a forum for candidates also this weekend.  Andrew Cockburn at Harper's has written the most glowing account, in "Texas is The Future":

Ask anyone who was present at Hillary Clinton’s presumptive victory celebration on November 8 and they will tell you of the stunned silence, broken only by sobs, that settled across the vast glass enclosure of the Javits Center in Manhattan. Upstairs, in the suite where the candidate was closeted with her family and associates, the trauma was even more intense. As one attendee later reported to me, it featured the “full range of human emotions: screams, shock, fainting. Bill moved immediately to blame.” The former president, I was told, singled out campaign manager Robby Mook: “ ‘We should have fired that asshole months ago!’ It was awful.”

This funereal atmosphere was replicated wherever Democrats were gathered across the nation — with one instructive exception. In the Heights neighborhood of Houston, hundreds of revelers thronged bars along Studewood Street late into the night. “Any Houston Democrat who was anybody was there,” Doug Miller, a local reporter, told me later. “I looked up at the TV screens on the walls, I could see the whole country turning red, but everyone there seemed happy!”

The reason was simple. Unlike the rest of the country, Houston Democrats had a full-scale Republican rout to celebrate. The party had swept the polls in Harris County, the vast region encompassing Houston, arguably the nation’s most diverse city (as locals never tire of repeating). With 4.5 million inhabitants, the county is more populous than half the states in America. Now Harris voters had elected a Democratic district attorney — a very powerful post in Texas law enforcement — for the first time in thirty-six years. The Democrats had also captured almost every other slot on the ballot, including the tax assessor’s office, which oversees voter registration: a crucial win in an age of Republican voter suppression.

Furthermore, these local victories carried over to the top of the ticket. Though it probably did little to lighten the mood in the Javits Center, Hillary Clinton trounced Donald Trump by more than 160,000 votes in a county that Barack Obama had carried by fewer than a thousand in 2012. While others in the defeated party were subsiding into melancholy, hand-wringing, and consolatory tales of Russian hackers, the county’s newly elected sheriff, former Houston police sergeant Ed Gonzalez, was assuring supporters that he would defy any orders to round up undocumented immigrants. Across the street, the new D.A., Kim Ogg, promised her exuberant audience a progressive agenda: “We’re going to have a system that doesn’t oppress the poor.”

Voter endorsement of such progressive positions, well to the left of anything Clinton promoted during her message-lite campaign, was all the more dramatic in this reddest of red states. The prospect of life under an administration populated with avaricious plutocrats, xenophobes, and religious fanatics may chill the blood of countless Americans, but Texans have been living in such conditions for decades. Pertinent examples abound, not least the unremitting legislative assaults on Texan women, the latest being a proposed rule requiring that fetal tissue from abortions or miscarriages be expensively interred or cremated. Add to that cash-starved public schools, cuts in services for disabled children, record-breaking numbers of uninsured, lack of compensation for injured workers, the wholesale gutting of environmental regulations, soaring inequality, hostility to immigrants, and multiple restrictions on voting rights. Texas may therefore serve as an example of what could be in store for the rest of us. “The Texas Republicans have done a good job on voter suppression,” Craig Varoga, a Democratic political consultant and veteran of many election battles across the state, told me gloomily. “Now you’re going to see the same thing happening nationally, with the blessing of the Department of Justice.”


Read on from there.  The author spotlights the sheriff and DA's races, where Ed Gonzalez and Kim Ogg ran on actual liberal policies against hapless Republican incumbent opponents, and gives kudos to the Texas Organizing Project for turning out the vote.  These are election strategies that can be duplicated here again and elsewhere across the state.  If Lillie Schechter or Dominique Davis is elected, then I suspect either one of those women has the chops to keep the roll going.  If some pretender like Rob Collier or Keryl Douglas gets in, something tells me the momentum will be endangered.  Twenty-eighteen is going to be a rough enough cycle for the Blues without committing the usual unforced errors.
Posted by PDiddie at Thursday, February 23, 2017

Is Ellison really that much more "progressive" anyway? Like Bernie himself, only on domestic policy. On for pol, he's just as much a warhawk as Bernie himself. Of course, I'm sure this led to Bernie deliberately not discussing foreign policy in his new book.

Yeah, he meets the definition of 'progressive' as a social liberal. There are essentially no Democrats that are progressive on foreign policy. Not Sanders, not Warren. The same holds true of the DSA as well, best I can tell.

It's obvious he is too far left for the DNC, and they will verify that on Saturday.