With this week's blog post roundup, the Texas Progressive Alliance cautiously awaits the Supreme Court's imminent ruling on the reproductive freedoms of women in Texas... and the United States. 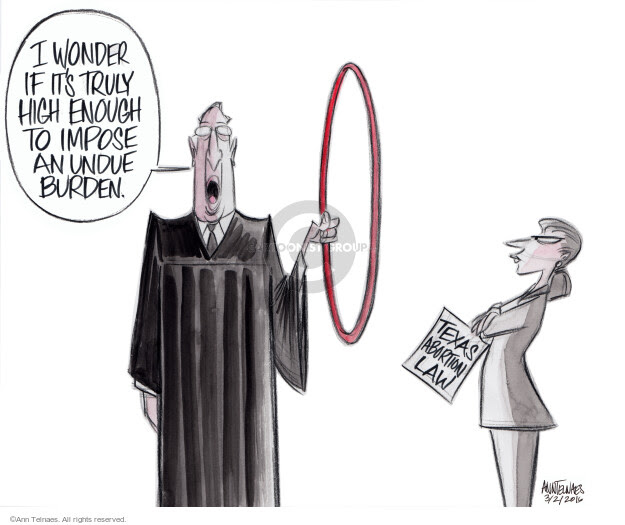 Off the Kuff takes a look at the first general election poll of Texas, which has some encouraging bits for Democrats.

Socratic Gadfly notes how the Supreme Court's recent anti-Fourth Amendment ruling was decided by the fifth vote of a Democrat-appointed justice, notes it's not the first time this has happened, and uses this to undercut one argument against third-party voting.

Texas Leftist took note of the evisceration of the Fourth Amendment.

As Bernie Sanders climbs on the Clinton bandwagon, PDiddie at Brains and Eggs steps away from the Democratic Party.

CouldBeTrue of South Texas Chisme wonders why Mark Scott is so anti-wind farm for Corpus Christi. One smells a large rat.

Chris Faulkner of Breitling Energy is being prosecuted by the SEC for fraud, reports TXsharon's Bluedaze.

Egberto Willies posted the thought-provoking racial justice speech given by Jesse Williams at the BET awards.

The Lewisville Texan Journal highlights the call from the DFW regional pet control authority to "clear the shelters" next month.

Neil at All People Have Value kept an eye open for the value of everyday life. APHV is part of NeilAquino.com.

As we anticipate a ruling from the Supreme Court today on the abortion restrictions imposed by the Texas Lege, Teddy Wilson at Rewire has numbers that show a surge in Texas women leaving the state to have an abortion.

Zachery Taylor observed the political kabuki that is the House sit-in protest on a gun vote.

Grits for Breakfast also noticed the body blows suffered by the Fourth Amendment.

The Houston Press says it's raining dogs and dogs at BARC.

On the first anniversary of #LoveWins, TFN lists five predictions of the Right-Wing Fear Machine that never came true.

TransGriot congratulates Lou Weaver for being the first-ever out trans masculine Texan to serve as a national Democratic delegate.

BOR observes the difference between "thoughts and prayers" and actions.

Scott Braddock reports on worker misclassification and how it may affect the upcoming Uber/Lyft legislative debate.

Juanita Jean has had it with Paul Ryan.

Prairie Weather points out how far the GOP is ahead of the Democrats when it comes to gerrymandering.

Save Buffalo Bayou flew a camera-equipped drone down the length of the Bayou's City's most prominent body of water.

And Pages of Victory comes out in support of Jill Stein.
Posted by PDiddie at Monday, June 27, 2016