No pasaran.  He's going to be the nominee.  What now, #NeverTrumpets? 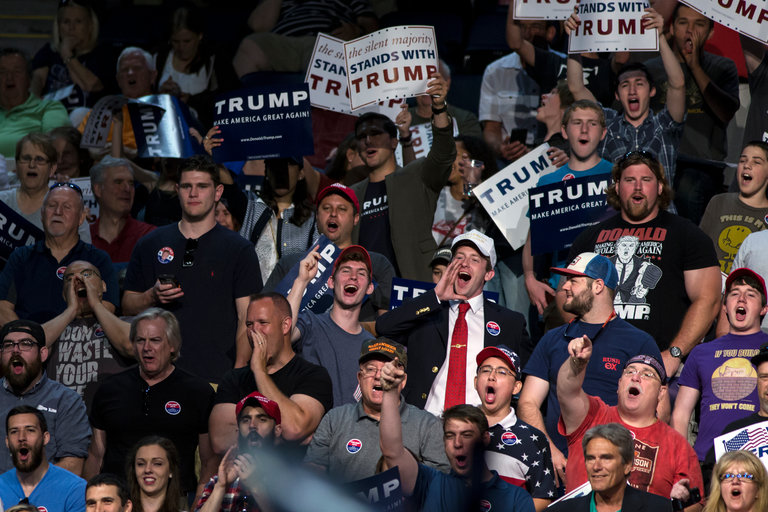 Republicans looking to dump Donald Trump at next month’s convention have passion, energy and a fierce sense that their party will suffer unless Trump is unseated. What they appear to lack, however, are the votes to make it happen.

POLITICO reached out to all 112 members of the committee that will write the rules of the national GOP convention. This is the panel that anti-Trump activists hope to jam a proposal through to free convention delegates to spurn Trump and select another candidate instead.

What emerged from the survey, though, is a portrait of a committee with little interest in the dump Trump crowd. In fact, most members may be eager to stop them.
“I support DJT 100%,” said Alabama rules committee member Laura Payne in an email. “I ran to support … Trump & to represent the voters of Alabama. It may or may not be an attempt, but the voters will prevail.”

"Trying to change the rules in mid-game because you don't like the outcome is tantamount to saying you are going to take your ball and go home because you are losing," said Christine Serrano-Glassner, a Rules Committee delegate from New Jersey. "I will be supporting our Nominee, Donald J. Trump."

It was a common sentiment. Among the 32 committee members who responded, 25 said they would fight efforts to stop Trump’s nomination. Another 33 members of the panel have been previously on record as endorsing Trump or rejecting efforts to rip the nomination away from him at the convention.


The NYT piles on.  It's such a fascinating thing to me in this cycle that so many binary thinkers are going to be suffering so much cognitive dissonance.  Those that were once psychologically shackled inside the two-party box are suddenly forced to think outside it.

-- The media will be compelled to include the Green and the Libertarian in the horse-race polling, or else show themselves as duopoly frauds.  Polls without them won't reflect reality; just another attempt to silence their voices.  Manipulating the data by removing third party votes altogether and then presenting the D and Rs as the full universe of the electorate is one of the transgressions I would imagine I'll be forced to point out.  More times than I would wish.

-- There will be an ever-louder cry to include the two minor-party candidates in the presidential debates, which are currently micromanaged by the CPD aka Ds and Rs to the exclusion of voices outside the two main lanes.

-- Most importantly, people who never would have considered the most proper protest vote will now be casting one.  Whether it turns out to be an extra couple of percent above their usual one or two, or whether it's more than that -- or much more than that -- is basically the most interesting conversation that's going to be happening this cycle.  Trump and Clinton's gaffes, legal problems, and assorted other he said/she said bullshit and negativity -- as fascinating as the corporate media will keep telling us it is -- just aren't going to do anything except suppress voter interest and correspondingly turnout, as polling traditionally demonstrates.

There remain far too may people who will insist that you only have two options, and a vote for one helps elect the other.  Stop falling for that crap.  Stop, also, listening to people who say that your vote is wasted, thrown away, or otherwise cancelled out unless you pick Coke or Pepsi.  Frick or Frack.  Ford or Chevy.  In a world full of multiple choices of everything, why should anyone settle for evil or less evil?

My teevee just isn't going to tell me anything about this election.  My recommendation is to not let yours tell you much either.  The Fox/sheep effect is nothing for so-called liberals to emulate.

Let's show that we're smarter than they think we are.  That's not too difficult a task, is it?  Not too much to ask?  It would be easy to be cynical, I know.  I still have hope for something more than incremental progress.  Call me naive'...
Posted by PDiddie at Tuesday, June 28, 2016