Not in quite the same way your generic Democrat might (scattershoot them).

-- After the Hillbots on the DNC platform committee nullified the Berners by refusing to disavow the TPP (and several other things, as you might already know), Sanders broke some balls with this NYT op-ed entitled "Democrats Need to Wake Up".

But it was Donald Trump who seized the reins by going to Rust Belt, Pennsylvania and blasting NAFTA specifically and free trade generally.

"Globalization has made the financial elite who donate to politicians very, very wealthy ... but it has left millions of our workers with nothing but poverty and heartache," Trump told supporters during a prepared speech [...] devoted to what he called "How To Make America Wealthy Again" ...

Trump offered a series of familiar plans designed to deal with what he called "failed trade policies" — including rejection of the proposed Trans-Pacific Partnership (TPP) with Pacific Rim nations and re-negotiation of the North American Free Trade Agreement (NAFTA) with Canada and Mexico, withdrawing from it if necessary.


Drumpf is doing a fairly masterful job of catapulting the Brexit propaganda here, and like my friend David Courtney, I believe this will be a very effective line of attack against Hillary Clinton.  It's a pure populist economic message that will resonate with lots and lots of independents, provided Trump can be convincingly sincere about it.  He'll never meet my threshold for candor, but I'm not your average disgusted-with-both-parties voter.

-- Take note of who is actually doing the knife-twisting here.

Texas Gov. Greg Abbott appears to be deeply dissatisfied with how Land Commissioner George P. Bush's office handled a recent lawsuit over historical items at the Alamo, according to an internal memo obtained by the Houston Chronicle.

The June 20 memo, which was written by Abbott chief of staff Daniel Hodge as part of the process of approving the settlement, called the deal "regrettable" and "avoidable."

"Had the General Land Office more vigorously defended the State's interests in this matter, the agency would not have found itself in a position in which the (Daughters of the Republic of Texas) can demand this settlement," Hodge wrote.

"The Governor approves this settlement to take place solely out of deference to the independent constitutional officeholder requesting it," he added.

The General Land Office agreed in the settlement to relinquish its claim on thousands of artifacts in the Alamo's collection and pay $200,000 to cover the legal fees of the rightful owners, the Daughters of the Republic of Texas.


Pee Bush has been a disaster in in his first real job, and if Abbott is delegating his top stooge to do the screwing ... well, I'd say it's only a matter of time before someone finds himself challenged in a Republican primary.  A Bush Family vs. Abbott war for the soul of the RPTX might be in the offing, and wouldn't that be fun to watch.  (Sidebar: Did you ever think that the Bushes would be mentioned with the less insane, moderate/liberal/RINO wing of the the GOP?  Nobody could have predicted that.)  But it's Hodge you should take note of here; he's been one of Abbott's Knights Templar from the get-go, the power behind the wheelchair.  Watch for his name to eventually pop up on a ballot near you.

-- The landmark SCOTUS ruling on Monday striking down Texas' onerous restrictions on women's health should birth a passel of new litigation aimed at the anti-choice effort.

Since the Supreme Court has long held that women have a constitutional right to an abortion, anti-abortion groups over the past decade have turned to the states to pass hundreds of laws designed to discourage abortions, such as waiting periods, mandated fetal sonograms and parental consent requirements.


Bring on the lawsuits, ladies and gentlemen, and let's start with that goddamned sonogram law.  In your not-The-Onion update, Greg Abbott got served with a class-action vagina eviction notice. 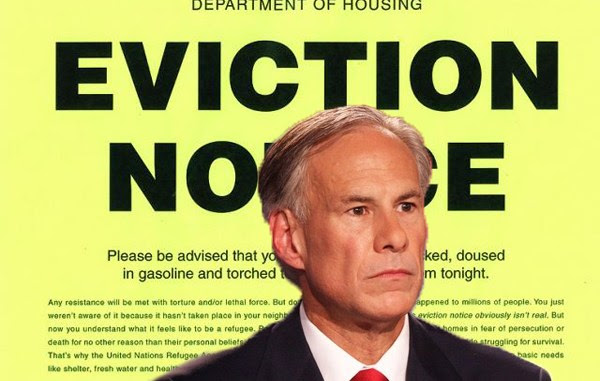 The Governor of Texas has been served with a 30 day eviction notice, and by court order he must be vacated from all Texan vaginae before that time. The writ of eviction comes just a day after the Supreme Court batted down his state’s law that would have shuttered nearly every abortion clinic in the Lone Star State had it withstood judicial review.

“I have been given this notice,” Gov. Greg Abbott told reporters as he was seen moving a large U-Haul box out of a woman’s uterus on 4th and Stubb’s Ave in Austin this morning, “and I will comply. I will be out of every vagina in the state by the end of the month.” Abbott said it would “take awhile” but that he heard the message from the Supreme Court “loud and clear.”


What a pussy.  And some people said he was a fighter.

-- So you still think you can reform the Democratic Party?  Don't be a sucker.

The latest Gallup poll on the subject showed that 60 percent of Americans believed that a third party was needed nationally in order to “do an adequate job of representing the American people”. Lest you think that this is some surge due to the current election cycle, a majority of Americans have stated the need for a third party in almost every Gallup poll since 2007. This system is crumbling because Americans look around and see two political parties that are enthralled with Wall Street and diffident (at best) to the concerns of the working class and the marginalized.

Meanwhile, wage growth is stagnant, high-paying manufacturing jobs are being replaced by low-wage, low-stability service jobs, police brutality continues with an official imprimatur from local officials, and mass acts of violence directed at the bodily autonomy of women and the human rights of LGBTQ people go off with only the most cursory of responses (for prayers and reflection, of course) from the leaders of the major parties. That is, when they cannot pin this on the brown people who will inevitably be the targets of an ever-increasing police state.

Instead of spending the next 10, 20, 30, or 60 years trying to take over a party that has demonstrated its rank hostility to leftists and their vision for a new world, why not begin the process of building a party organization from the ground up? A party organization that works alongside movements for change rather than co-opting them. A party organization that recognizes that fundamental humanity of people both domestic and abroad. Why place such a revolutionary vision of society and economy within the tight constraints of two-party politics? Because if the Bernie campaign has taught the American Left anything, it is that Democratic partisans and their allies in the media will work hand-in-hand to snuff out any challenge that could threaten the dominance of neoliberalism within the party.

We can do better. We should do better. And if we trust in the collective efforts of those committed to political, social, and economic liberation, we will do better.


If you're buying in, there's lots of work to be done.  You can ask me how if you want some directions on where to get started.
Posted by PDiddie at Wednesday, June 29, 2016