How you know Bernie's already conceded

This Weak with George Snufflelufagus may have been pre-empted in your market for coverage of the Orlando tragedy, so if you missed this, take note. 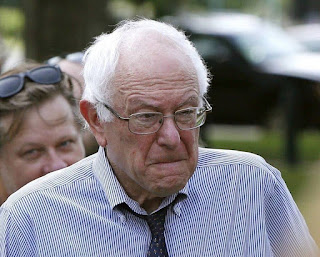 The Vermont senator also plans to meet with Clinton Tuesday to press her to embrace his progressive agenda.

On ABC's "This Week" Sunday, Sanders said he and Clinton will discuss "if she wins, what kind of administration she will have."

"What I need to see [is] a commitment that there will be progressive taxation," Sanders said.

"Will she go as far as I would like her to go? No, she won't," he said. "But I think millions of people want to understand and see is what kind of commitment she has to addressing the real crises in the country."


Sanders is done, y'all.  Fought the good fight and all that happy horseshit, but now he's tired and he wants to go to bed.  All that's left to negotiate is his severance package.  Vice-president?  I doubt it.  Senate Majority Leader?  Kinda laughable, to say nothing of that blogger's command of the English language.

Some party platform BS, BS?  Yeah, he'll take that.  A tax increase, though?  In the words* of Hillary Clinton, 'you gotta be shitting me, old man'.

Over to you, Bern Unit.