Cheeto Jesus begs me for money

Previously I indicated my experience as a Republican donor named Saul Relative, so these random fundraising letters always give me a good laugh. 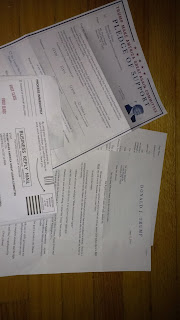 Sorry about you having to read it sideways; click to enlarge.  Four pages, two front and back.  Big D didn't get the memo from the Seventies about using just the one page.  Oh well, his support network is surely intelligent enough to act on it, even if they can't read it.

I'll watch for a news account -- or a post from some blogger who spends lots of time compiling campaign finance reports -- mentioning the money haul in a few weeks, see how the shill is going.  My guess is it'll be good.  Meanwhile note that he's doing it wrong, in an illegal kinda way.

As the scrutiny on the Orange-utan comes into tighter focus, we learn that Drumpf really isn't smarter than a fifth-grader.  Also that his rallies tend to leave behind large tabs that municipal taxpayers have to foot.

(T)he city of Costa Mesa, California, spent $30,000 on security for an April Trump rally at which violent protests resulted in several arrests and damaged police cars. The city asked the Trump campaign to pay $15,000, but the campaign has not offered to help and they are not obligated to do so, according to Bloomberg News.

Law enforcement officials told Bloomberg News that the Trump campaign's tendency to sell more tickets than there are seats available results in large crowds outside of venues, sometimes ending in clashes with protesters.

Matt Rokus, the deputy police chief in Eau Claire, Wisconsin, said that for a rally in the city, the Trump campaign sold 6,000 tickets for a venue that seats 1,800.

"Duh, there’s going to be a problem," Rokus told Bloomberg News. "You got a bunch of people who drove hours to get there thinking they had a seat."


That explains some of the extra anger, anyway.  This isn't going to be your father's Republican election cycle.  It's not even going to be a GOP scampaign that you'll be able to recognize from the more recent ones.  Another 'no-precedent' occurrence in a long line of 'em, and more certainly to look out for.  Fun!
Posted by PDiddie at Thursday, June 30, 2016