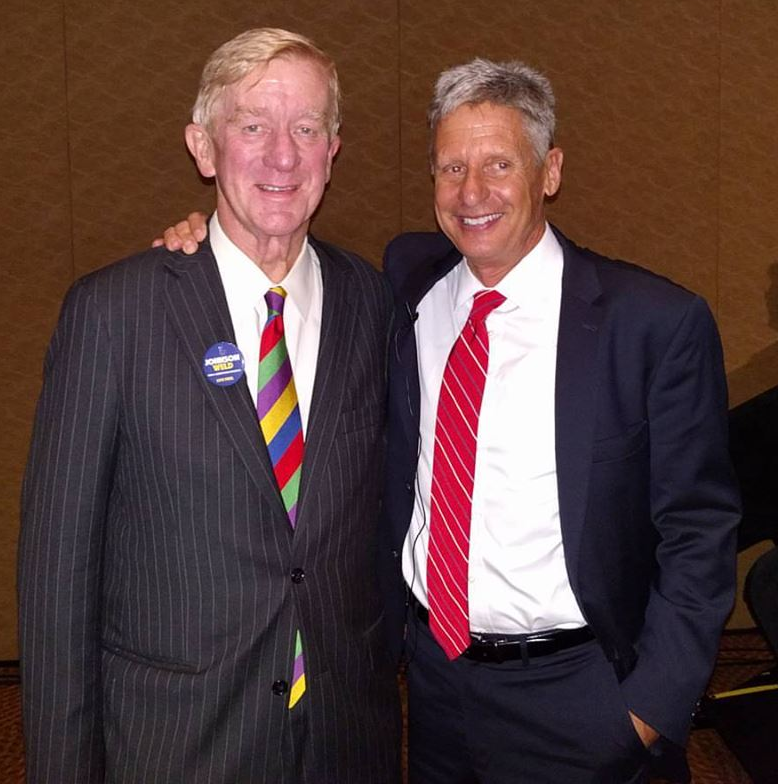 -- Mentioned previously here is the on-the-radar polling appearance of the Libertarians, now at double digits nationally.  This has garnered attention in the corporate media, which is awfully big and early for this level of publicity.  Polling outfits consequently are now including both in their methodology ...

In the past, even when the occasional poll does list a third-party candidate, RCP has ignored that listing. This appears to be a sign that both Johnson and Stein will now be listed in most, if not all, national and state polls.


... which can only help with the ultimate goal of getting them both into the nationally televised debates in the fall.  Here are a few calls to action in that regard, designed to appeal to the roadblock that is the Commission on Presidential Debates.  Free and Equal sponsored 2012's presidential debate, moderated by Larry King, which included Johnson, Stein, Virgil Goode of the Constitution Party, and Rocky Anderson of the Justice Party and blogged in this space.

In an interesting development, V-P nominee Weld told the New York Times in yesterday's issue that he saw nothing 'criminally' wrong with Hillary Clinton's use of a private e-mail server.  There's sure lots of different ways for that to be interpreted.  I'll wait for the spin from various quarters before I lend my two cents' worth.

And pay no heed to Debbie Downers who say that the Greens and Libs always poll higher than they actually wind up with on Election Day -- this isn't going to be a normal year -- or that dreaming big on the part of alternate candidates and parties is something to be mocked.  That kind of discouragement is not how we raise our children and grandchildren; it's not even how our mayor manages the city.

Democrats used to dream of moonshots; now they can't even allow the consideration of universal single payer health care, allegedly on the basis of pragmatism.  It's a very sad decline in ambition for a once-esteemed political party, and the Texas version is even more pitiable with respect to thinking small.

As for Johnson and Weld: If I were conservatively inclined, I would be more likely to vote for a Republican than a Lib for president ... unless it was Donald Trump running as a Republican.  And that's precisely why Gary Johnson and William Weld are polling so well.  Be reminded that should the Libs hold onto or build on this share of the electorate, then Drumpf is dead in the Electoral College water (if he isn't already).

I say this as someone who has voted for many Libertarians down the ballot, for judicial and even statewide posts where there was no Green or Democrat for me to vote for.  On the basis of where they are in the political/chronological cycle, the Libs are to be used electorally in the same way that the Greens should be used against the Dems; as the best tool in the box to get better governing from the two major parties.  Nothing -- certainly not undervoting -- better sends the message that your vote cannot be taken for granted by the Ds or Rs.

Update: Since we're collecting spitballs, this dude at Cato has some convoluted speculation we can amuse ourselves with.

Ilya Shapiro has this piece in USA Today, suggesting that three individuals might receive electoral votes in November 2016, thus depriving any candidate of a majority in the electoral college. He suggests the third person to receive electoral votes might be Gary Johnson. He speculates that Johnson could conceivably carry New Mexico. Then he also speculates that some Republican presidential electors from other states might “disobey” or “be faithless” and vote for Johnson instead of Trump.


There's also polling data supplied that suggests Clinton is leaking support to Johnson.  That poll was taken in March.  You know, when Ted Cuz and John Kasich were still in the race.

Can you believe that there are people who get paid handsomely for writing shit so crazy that I wouldn't even try to pass it off as legit?

-- Jill Stein has been getting her earned media also. GQ profiled and interviewed her in the past week; Rolling Stone did so twice.  The Greens go last with their presidential nominating convention, for the first time being held in the South and right here in Houston the first weekend in August.  Let's keep our fingers crossed that the monsoons -- and hurricanes -- take some time off.
Posted by PDiddie at Thursday, June 02, 2016

No "spin" in Weld's words. A number of legal scholars have said that any offenses committed by HRC herself are likely civil only, per the statutes that would allegedly be violated.