It was the difference in 2004 for W Bush (maybe we should point out Ken Blackwell's unique role in that) and it is likely to be once again. 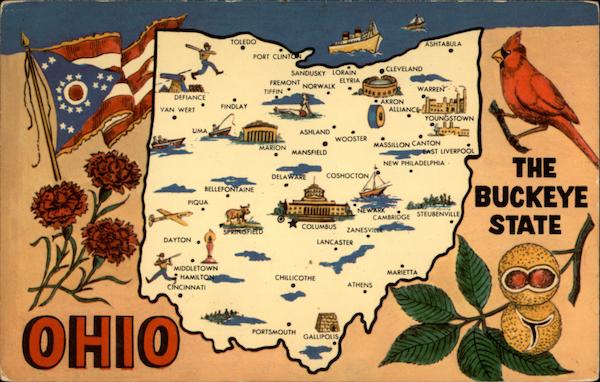 -- Latest polling in head-to-head matchups between Drumpf and Clinton have her taking a small lead.  Remember that this was Kasich's big win as favorite son in the spring GOP primary.  Clinton took 56% of the vote against Sanders in mid-March.  Future polling that includes Gary Johnson and Jill Stein should be even more interesting.

-- They have a high-profile US Senate contest on the ballot, with incumbent Rob Portman (R) facing former Gov. Ted Strickland (D).  That race is tight as a tick.

-- There are two indies and a Green running with Portman and Strickland.  Scott Rupert, the most conservative of the two independents, ran in 2012 and got 4.5% of the vote.  That's going to be bad news for Portman, despite his clinging to Trump.

-- Sen. Sherrod Brown has been lightly rumored as Hillary's running mate, and has made some short lists of late, but Elizabeth Warren has a better chance of being picked because it would be less likely that her Senate seat is lost to the Republicans (in the long run).  If Brown should wind up as her running mate, though, the GOP is absolute toast.

-- The big thing for Buckeye Staters in November 2016 is fair trade.  Via Thom Hartmann ...

Don Gonyea on NPRs Morning Edition talked to a former steelworker and lifelong Democrat in Canton, Ohio who is supporting Trump in this election based on his rhetoric on trade.

Other steelworkers told Gonyea that they would have supported Bernie Sanders because he was as clear as Trump about trade, but that given a choice between Trump and Hillary, Trump is more outspoken about how badly the middle class has been hurt by our disastrous trade deals.

And if anything should worry Democrats about the general election, it should be the very real possibility of losing the votes of rank-and-file working people and lifelong Democrats to Donald Trump and other down-ticket Republicans who might start parroting his anti-trade rhetoric.


Ohio's courts have recently turned back voting restrictions attempted by state Republicans, another good omen for Dems.  And this Hill piece is excellent if you want to get deeper into the Buckeye weeds, with the urban vs. rural county divide and GOTV efforts keying on the trade issue.

Even the tenth most populist county in the state, Mahoning County, the heart of the Mahoning Valley, an area devastated by trade deals, new technologies and the home of the remains of America’s once mighty steel industry.

A Democrat powerhouse of voters with Youngstown as its capitol – it went big for Obama in 2012 but the primary results in 2016 showed a big win for Trump and a lot of cross-over votes for the controversial Republican presumptive nominee.

“If Trump were to somehow win this county, the election is over,” said Sracic, “I still think that is unlikely, what may be more likely is that Trump performs as well as Reagan did back in the 1980's,” he said.

In 1984, Reagan lost Mahoning County, but earned about 41% of the vote. That may not sound significant, but since then no Republican has ever earned even 40% of the votes of these working class voters.  Will these Reagan Democrats and their children become Trump Democrats?


Ohio is going to be my favorite state to watch in this cycle.
Posted by PDiddie at Friday, June 10, 2016

Remember that Youngstown/Mahoning Valley was represented for decades by bribery-convicted James Traficant, arguably, though a Dem, a junior version of a Trump in many ways. That's definitely Trump territory.