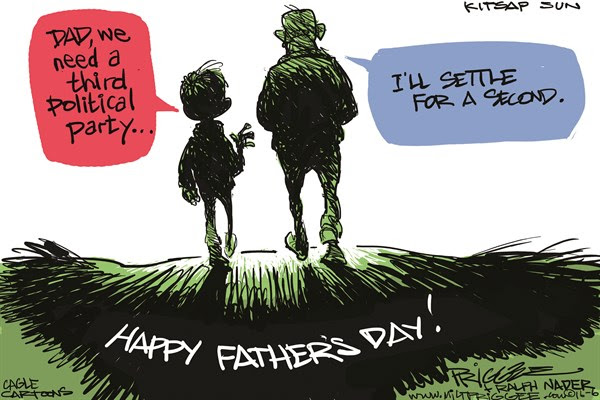 Is your mind capable of holding competing thoughts simultaneously?  Here we go ...

-- Donald Trump does NOT have a path to victory in November.

To reach 270, Trump’s team is aiming to capture America’s Rust Belt — specifically, Pennsylvania, Ohio, Michigan and Wisconsin — where polls generally show him performing better than Mitt Romney did at this point in 2012. If he can capture Florida and keep North Carolina — the 2012 red state of the lightest hue — a strong showing that includes capture of the Rust Belt could, Trump’s team believes, put him over the top.

But the odds are long, veteran strategists said.

“It’s a fantasy. Romney got 19 percent of nonwhites. Is Trump going to do better? I don’t think so,” said Stuart Stevens, Romney’s 2012 campaign strategist. “It’s a joke. It’s just talking. It has no grounding in reality.”


-- Neither should anyone expect the entrenched insider Republicans to overthrow the will of their voters and install someone -- anyone -- else as the GOP nominee at their national convention in Cleveland next month.  There would be an actual revolution, complete with lots of shooting from many guns and real blood running in the streets if they tried.  Bernie Sanders does, in fact, have a greater chance of being the Democratic nominee than (fill in the blank with any name you like) has of being the Republican one.  And Bernie has essentially no chance at all.  Better chances of winning the Powerball.

Only a federal indictment can stop her now, and perhaps not even that.

That won't stop the Sandernistas from their #SeeYouInPhilly mission, and whatever they accomplish beyond a few platform positions that some will characterize as "transforming" the Democratic Party will be, in reality, negligible.  Their hearts are in the right place, I suppose, but they're using their heads to beat against the castle wall.  It will feel so good to them when they stop that.

The head of Debbie Wasserman Schultz on a pike comes about three months too late.

-- More evidence that they aren't getting on the Clinton bandwagon.

Hillary Clinton may be the presumptive Democratic nominee, but the fight to unify the party and its traditional allies in the wake of an unexpectedly long and contentious primary is poised to go on much longer.

The more than 3,000 Bernie Sanders supporters and progressive activists gathered here at the "People's Summit" have engaged in little open talk about Clinton, preferring instead to plot a path forward in the wake of the Vermont senator's defeat -- and questioning the motivations of the Democratic Party and the legitimacy of its nominating contest.

"There is massive corruption in the machinery of the Democratic Party," said RoseAnn DeMoro, the executive director of National Nurses United, the powwow's principal organizer, who had endorsed Sanders. "The only way that we can overcome that corruption and manipulation is for all of us not to work in isolation."


The People's Summit folks shut out Jill Stein and the Greens.  Everybody seems to want to start from scratch; I'm getting email now from the United Progressive Party. Their website is inoperable at this posting, but their logo should tell you everything you need to know.

The progressive left in the United States -- which has one foot inside the tent and one foot out -- has always been fractured and disorganized and ineffective as a result, and it may be even more so in 2016.  That would be unfortunate but not unexpected.

-- So Stein is going full-bore after the ruling duopoly.  Read all of this profile of her and her party; it's the best one yet.  Here's a snip about "safe states":

Sanders has drawn fire from Democrats for staying in the race despite lacking the delegates to win the nomination, but Stein may be even more politically brash than Bernie. Not only does she lack Sanders’ squeamishness about tipping the race to the Republicans, she is burying the tentative approach to presidential campaigning tried by 2004 Green candidate David Cobb. Following the 2000 election, when many blamed Nader for contributing to Democrat Al Gore’s defeat in Florida, Cobb pioneered a “safe-state” strategy—hunting only for votes in deep blue and deep red states, thus successfully protecting the Greens from the “spoiler” label. But he wasn’t successful in winning votes, garnering only 120,000 votes compared to Nader’s 2.9 million.

Stein defiantly told Politico Magazine she has a “No Safe State strategy,” because “there is no safe state under a Democratic or Republican future.” She’ll be stumping in Pennsylvania later this month.


--  Noam Chomsky has co-written a treatise about it; Counterpunch has counter-punched it. Bold emphasis below is mine.

[Chomsky and co-author John Halle] ... make an argument that by electing Clinton (i.e. by voting for her in swing states) this allows for the continuing growth of the left and reduces the amount of harm that will be caused over the next four years. I do not doubt their desire for radical change, nor do I doubt that they make these arguments because they find them morally justifiable in consideration of the consequences of our actions. Yet, it is dubious whether we can consider Clinton an LEV, just as much as it is dubious whether electing Clinton would enable the growth of the Left. I am not arguing from what they call a “politics of moral witness”, but argue in the same analytic vein that they have placed their brief. That is, is Clinton on topics such as climate change, trade, and militarism actually an LEV in comparison to Trump? Taking their criteria of consequences over rhetoric, there seems at best a “dimes worth of difference” on these topics.


Go ahead and try it on, see if it fits.

I'm an advocate of the "safe states" mission, but am swiftly moving in the direction of the "fuck 'em all" premise.  Some people say that's white privilege.  I say if someone wants to fix white privilege, then they need to go vote it out of office.  I won't be bothered one little bit by that.

-- The Texas Democratic convention this weekend past was, as I predicted, a joke.  These accounts of the steamrolling of Sanders delegates are essentially all you need to know about why there is a #SeeYouInPhilly movement.  But it was funny/not funny in pretty much every other way you can think of.  I'm glad John had a good time, though.
Posted by PDiddie at Sunday, June 19, 2016

Inquisitr found some silver linings in the Texas Democratic Convention: the Sanderista minority, along with some progressive Clintonites (they do exist) got some progressive planks into the platform.

Yes, and the Texas Observer also elaborated on that, even if they used 'chaos' in the headline to describe the scene.