"What Time is the Coronation" scattershooting

#FreeHillary became a trend after eleven hours of Q&A.  This one, though, is best. 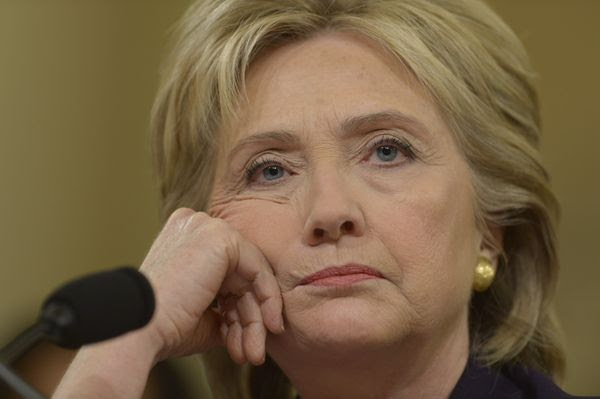 -- Trump lost his lead in Iowa, and promptly blamed Monsanto. 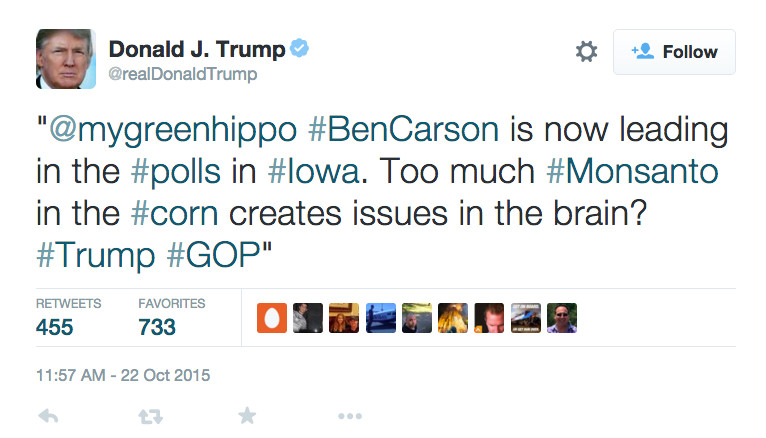 Later, he deleted it and blamed a "young intern".  Oh, those millennials.

-- The real black brain surgeon takes over front-runner status in the Hawkeye State, and naturally gives all the glory to God.

You know, the draft movement built and I finally said, "Lord, I don't particularly want to do this, it's not on my bucket list, but if you want me to do it, you open the doors and I'll walk through them and if you close the doors, I'll sit down."

And the doors began flying open, much to the consternation of all the professional class and all the pundits who said, "It's impossible, you can't possibly put together a national organization as a political neophyte, you don't know any of the people, there's no money. You can't do it, it's impossible, forget about it."

And yet, you see, it’s happening. And they don’t understand the power of God.


Who does God pick in the World Series, Doctor?

God is also telling Carson that Medicare should be abolished and that the Queen is going to jail.  (That's probably Sean Hannity doing the talking there, to be fair.)

-- Turnout for Houston's elections looks a little stronger than years past, but not all that much.  Some of the EV boxes in Republican parts of town are heavy, and in predominantly African American precincts as well, which might be good for those candidates (black and/or conservative) in close races.  With the understanding that Latino voters don't live in clustered neighborhoods so much as they live all over the city, I don't see anything suggesting a "historic turnout" for "the community" that might be helping Adrian Garcia.  And it's still far too early to divine any significant trend.

When Campos says "don't focus on the votes, focus on the percentages", remember that percentages don't count in the tabulation of election winners.  I wish I didn't have to keep pointing out what a moron this guy is, but he just makes it necessary.  He was a joke ten years ago, and it's still not funny after a decade.  One of his clients may be replacing Ed Gonzales on council; she has no primary voting history going back three cycles (scroll halfway down to District H).  The Chronicle endorsed her, but they also endorsed Mitt Romney for president and Ted Cruz for the US Senate.  She might be a nice lady and even a qualified candidate, but why would you vote for someone who has held office as a school trustee and now wants a promotion to city council who can't be bothered to vote in primary elections?  Her questionnaire says she is not educating voters on photo ID.  That's real helpful for a Latina candidate in a predominantly Latino/a district.

Seems to me there are better options for District H representative (except for one, that is).
Posted by PDiddie at Friday, October 23, 2015

One could argue that Huckleberry J's should-be paramour was actually trying to help Hillz out because he and other wingnuts still think she'll be a weak candidate in the general, and this has further weakened her.

As for 2020? IF the GOP gets its shite together, assuming Hillz gets the nomination, then wins the general, they likely could win. Surely there will be some sort of economic downturn in 2017-2020, Hillz will probably adapt some neoliberal solution while failing to convincingly utter hubster's "I feel your pain" mantra, and be vulnerable to a real GOP candidate.

Very early thought? Look for Michigan guv Rick Snyder to start his turd-polishing in about late 2018.

If Rubio gets the nomination and loses, he's toast. Plus, Florida doesn't have an LBJ law, and 2016 is his Senate seat year (as it is for Sen. Squirrel Hair, Dipshit-KY), so, he'll be out of politics for four years. Ted Cruz will have totally poisoned so many wells by 2020 that if he's even just in the race, that will be a sign they won't have their shit together.

I don't believe Karla Grandich Cisneros is a Latina. She married Mr. Romulo Cisneros on 8/2/1982 in San Antonio, TX.

Thanks, Ed. I wonder why this does not surprise me.