Unless there's another one I missed that happens today.  They're saying this is the last one, and from last night, televised on KHOU and coming from Ruds, there wasn't much in the way of sharp elbows thrown except for this... 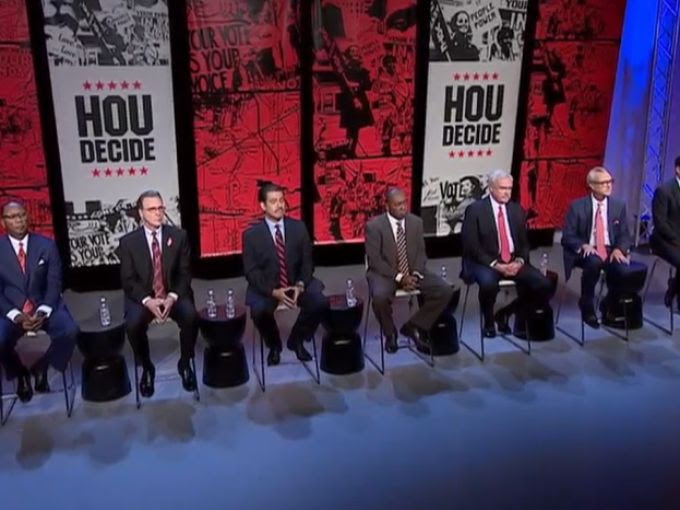 In one of the more fiery moments of the night, Garcia showed a picture of King on his yacht, trying to throw a barb and imply that he's not a man of the people.


Ha.  The format's lightning rounds were designed to cram as much into one hour as possible, which made the Tweeting difficult to keep pace with.  And the station even cut off Sylvester Turner's closing remarks, for a commercial, and then to their network's Dateline show or something.

So there's still some conversations among the seven that will keep happening -- probably a few of their own teevee commercial duels -- but if anybody paying attention is still undecided, they need a checkup from the neck up, as Zig Ziglar used to say.  Here's the video, and here's the liveblogging.  More attention was paid to moderators and analysts than is typical for these.  I ignored most of that, recommend you do likewise.  This sort of talking-head blather reminds me of the people who said Hillary Clinton won the Democratic debate last Tuesday... even though she didn't.  (You might recall that I thought she did, and I'm not voting for her under any circumstance whatsoever.  So take all of this "who won" back-and-forth with the proper grains of salt.)

Update: Free Press Houston, which was a co-sponsor of the debate and whose publisher, Omar Afra, served as one of the debate moderators, takes on the local control flip-flopping going on among the conservative candidates.

If these “small government” Republicans want to appear so brash and brazen in their resistance to federally-imposed standards when it comes to issues such as taxation, reproductive rights, education, and guns, why are they so willing to acquiesce or kowtow or punt their beloved local control and defer to the Big Bad Feds when it comes to the minimum wage and people’s freedom to engage in the victimless “crime” of marijuana consumption?


Early voting begins tomorrow, and there are some new locations from previous years.  There are state propositions, aka constitutional amendments, and that link is your best analysis of them.  Charles has the Chron's take; they suggest 'no' on a couple and I'm inclined that way as well.

County propositions (four bond approval items), and the Houston Community College and HISD board positions follow that on your ballot (others have details on those candidates, if you care.  There's a couple of interesting races there, but most are just too low on the radar for me to get to.)

For city of Houston residents, besides the election of mayor, controller, and sixteen city council members, there is Prop 1 (HERO) and Prop 2 (city council term revisions).  I've outlined options on all of these in many prior blog posts  -- I'll gather and link them for the "P Slate" later today -- except for the changing of CM's time in office.  I like the idea of two four-year terms rather than the current 3 two-year terms, because I have grown weary of watching council members turn right around and start campaigning for re-election barely after they have been sworn in.  There might be some lessening of the temptation for corruption here.  I'd like to think and hope so.

I just sent Progress Texas a blistering Tweet over its "toss-up" on Amendment 1.

I'm posting something roughly parallel to Texas Election Law tomorrow morning, but with different and even deeper reasons to oppose Prop. 7.

AND, in a politer, more professional way, my newspaper column for this coming Friday will be the same.