All the political literature I received this cycle

I think that's all of it, anyway.  In the bottom right corner you see the three door hangers I got during the summer.  As best I can tell my door hasn't been knocked upon since Labor Day. 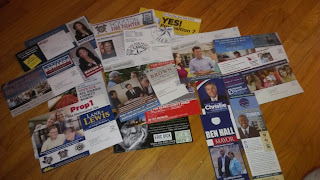 It should be noted that I am a "Triple-D" household according to the public voting records.  That means I have voted in the three most recent Democratic primaries -- 2014, 2012, 2010.  To the best of my knowledge, I have not received a telephone call from any campaign.  At least if they called me, they didn't leave a message.

I'm not sure why the Christie and Hall campaigns would drop literature at a DDD home, but there you have it.  My precinct is purple; blue in presidential years and red in midterms.  Can you imagine the volume of mail those dumbass Democrats who vote in GOP primaries have gotten?

I finally managed to vote on Wednesday, so if any of these campaigns are still mailing me after that, then they're more stupid than I can comprehend.  The SOS can merge/purge voters from the non's overnight, at least as I understand it, so that campaigns aren't still trying to persuade people who have already cast a ballot.  And to be fair, direct mail consultants still have to deal with the lag of a few days between printing and dropping (into your mailbox).

Tom McCasland wins largest mail piece; two 8 1/2 x 11s.  They stick up the highest out of my green recycle bin.  Amanda Edwards wins for frequency: three.  Statewide Prop 1 backers spent the most out of the subset of non-candidate-related mailings.  Chris Brown should look at the camera more often (all those shots of him looking down or away project weakness, IMHO).

One other thing: my next door neighbor -- not a Democratic primary voter for at least the past six years; remember I've been a precinct captain and worked the walk lists -- received an Adrian Garcia mailing (letter, probably donation solicitation) so either the former sheriff is wasting his considerable sum of money to a far greater extent than everyone else, or is soliciting Republican voters.  I'm guessing it's the latter.

I can count on one hand the teevee commercials I have seen; two for Steve Costello and one for Garcia.  But I don't watch much teevee either, certainly not local, news or otherwise, so I'm not a good barometer of that medium's reach.

Is anybody besides me embarrassed about this?  That this is what our local demonstration of democracy plutocracy/oligarchy looks like?  Frankly I would rather be bum-rushed by ten people with pushcards at the polling place.  At least I can say 'no thank you'.  I can't do anything with all of this crap except recycle it.

What would seven million bucks -- and that's just the mayorals, mind you -- have been better spent on?  How many potholes would that have filled if you stuffed them with cash and just topped them off with asphalt?

We need a better democracy than "who has/raises the most money".  Keep in mind that Costello, Bill King, and Ben Hall -- all losers, hopefully -- self-funded their campaigns.  If they're so rich, why ain't they smart?  But is it better to be held captive by the wealthiest, like Garcia and Sylvester Turner could be?

A better political system is needed, please.  One without so much money.
Posted by PDiddie at Friday, October 23, 2015

Sadly, no contested school board or council elections locally; on the professional side, we could always use the ad money.

And you'd probably catch a little ad revenue, at a weekly paper in a small to medium-sized town with more competitive races.

But the metro dailies (and weeklies, for that matter) cede most all of the campaign caysh to broadcast media. Essentially it's more accurate to call radio and teevee a narrowcast these days.

This is why the big newspaper companies should lead the way in editorializing for Citizens United. They don't have anything left to lose. Polls show getting the money out of politics in the 60 and even 70% favorability range. What's the holdup?

Oh, right. In suburban Dallas, we never got the county judge to drop any dimes on us, nor did he on the Snooze. And, the Hon. John Wiley Price never had opposition in his commissioner precinct. We did get the suburban candidates, but I know that Dallas mayoral candidates primarily hit teevee. And, our Congresscritter Eddie Bernice never visited the suburban part of her district, anyway.