Thank goodness for a dose of sanity. 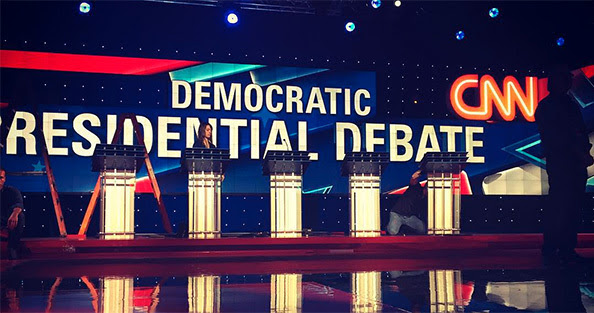 But it's not without its flaws (these are Democrats, after all; as someone once mangled a pair of metaphors, they have a lay-down hand if they don't shoot themselves in the head).

-- CNN has an extra lectern, bubblewrap still on the handtruck, just in case Joe Biden changes his mind at the last minute.  They could have let Lawrence Lessig use it, of course, but he doesn't poll high enough.  Because the polling outfits rarely include his name in the polls.

He's thinking about an independent run for president as a result of all these cold shoulders.  I hope the Justice Party and Rocky Anderson are recruiting him hard.

-- Then again, he'll have the same problem in the fall as Jill Stein (and Gary Johnson of the Libs, and the Justice Party's nominee and the Constitution Party's and so on).  We need more debates and we need more candidates in all of them.  That's good for democracy.  Such as we have left, that is.

-- Debbie Wasserman-Schultz, twice asked about Bernie Sanders, could not bring herself to say his name.  She also disinvited the vice chair of the DNC from attending tonight's event after Rep. Tulsi Gabbard of Hawaii -- her colleague in the US House as well as her second in command at the party's HQ -- called for more debates.

-- Hillary Clinton went to the steps of Donald Trump's Las Vegas casino with employees of his who want to form a union and blasted him.  I like this, but she really needs to wait until she's the nominee before she starts her general election campaign.  I might even get to liking this, but my first reaction is: "poor you":


Hillary Clinton says women are “held to a totally different standard” in politics — and that it’s been that way since she first ran for office.

“You’re expected to be both strong and vulnerable at the same time,” Clinton said in BuzzFeed’s “Another Round” podcast that was published online Sunday. “That’s not easy to do.”

The Democratic frontrunner said it’s “frustrating” for women in “any profession” to be criticized for being themselves.

“It’s just so hard to get people to realize that, you know, we’re all different,” Clinton said. “We may all be women, but we all have our strengths, we all have our weaknesses. We get up every morning and do the best we can. And eventually people either get you or they don’t.”

She's spot on about the sexism, and being treated differently because of her genitalia and all that.  I don't discount it, nor the fact that it's a consultant-crafted appeal to women who ought to be voting for her without encouragement (sort of like when Wendy Davis ran for governor, but I digress).  Her strategy appears to be a riff on that '80's perfume jingle:

I can bring home the bacon,
fry it up in a pan,
and never ever let you forget you're a man
'Cause I'm a woman

She's going to have to deal with sexism, just as Barack Obama has had to face the most craven and ugly personal smears from conservatives throughout the duration of his presidency.  See, it's possible to criticize a president's policy without pictures of bones through his nose, or if he is dressed as for a pilgrimage to Mecca.

She is going to have to endure the misogynists and chauvinists for the next eight and a half years, though.  Sorry about that, Mrs. Clinton.  Maybe you can influence some change in that societal regard when you're elected.  Obama, simply by being president, didn't change structural racism in America in all the ways we had hoped, but that's not on him, either.  Just do your thing and let the Republican heads explode and the pieces fall where they may.  (Or Democratic heads, as the case may be.)

I was raised by a steel magnolia.  I believe they can be great leaders.  Just please don't feel like you need to prove anything to the guys by starting any more wars, mmkay?

Sanders, Martin O'Malley, Lincoln Chafee, and James Webb all have their work cut out for them.

Update: This is the best viewer's guide I've read for tonight.
Posted by PDiddie at Tuesday, October 13, 2015

What? You didn't call my (hinted at) "under the bus" viewers' guide the best?

On Lessig, run Green instead. The Justice Party is little more than a post-Naderite, but Nader-influenced, vanity party that lets Ralph still spit raspberries at the Green Party since it refused to hand him the nomination on a platter in 2004.

But, the Nader of 2004 and on? Little love lost for him in this corner.