The Texas Progressive Alliance, thankful for a cool snap, reminds those who wish to vote in next month's elections to register today, not tomorrow, and congratulates the Houston Astros and Texas Rangers for scooching into the MLB playoffs beginning later this week. 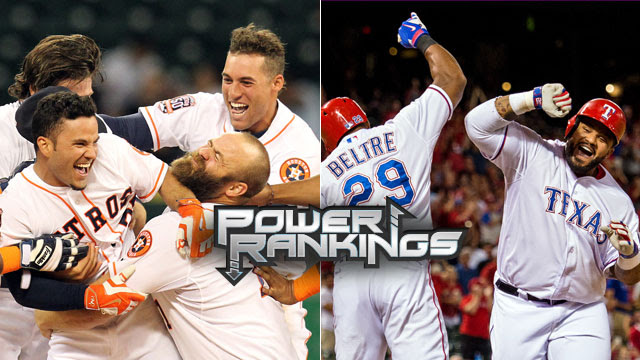 Off the Kuff highlights a new poll showing a gap between what the people of Texas believe and what their government stands for.

Libby Shaw at Texas Kaos, and contributing to Daily Kos, is grateful to U.S. House Speaker John Boehner for revealing his party's false prophets. She is also grateful a Republican presidential candidate's whopper about an abortion that did not happen is exposed.

SocraticGadfly cleans up the climate change trash that Erica Greider at Texas Monthly threw all over the ground.

CouldBeTrue of South Texas Chisme has had it with Republicans who treat workers like so much used toilet paper.

Lize Burr at Burnt Orange Report wonders how Texas got into this mess of Medicaid cuts to therapy workers.

Both Egberto Willies and Millard Fillmore's Bathtub noted the Texas mother who read in her child's textbook that slavery had been redefined as immigration, and got the publisher to agree to revise it.

The Harris County Green Party endorsed four Democrats in Houston municipal elections, bypassing the only announced Green member who was declared, in At Large 3. PDiddie at Brains and Eggs says there's a story about that, but he's not telling it.

Neil at All People Have Value took note of a nebulous campaign slogan posted on a yard sign.  Asking for specifics from our elected officials might be the proper question as we move toward new leadership in Houston at City Hall.

And McBlogger offers a better understanding of the leading GOP candidates' tax plans (as opposed to self-immolation).

Grits for Breakfast notes that statewide judicial candidates no longer have to get petition signatures from each appellate district.

Andrea Grimes, now writing for the Texas Observer, found herself aghast at the state of Texas' legal argument that denying some children their birth certificates has more to do with the Mexican government than it does the state's.

Tamara Tabo has some helpful hints for the Gaslamp and other (allegedly) racist nightclubs.

The TSTA Blog warns about bullies.

Eric Berger explains what the discovery of water on Mars means for the future of space exploration.

Zachery Taylor has the Walmart crime report for last month.

And Fascist Dyke Motors paid her kids back for passing along their bug by telling them scary stories about the things inside the walls.
Posted by PDiddie at Monday, October 05, 2015

I'm fixing the baseball teams, which you got incorrect, on my blog. :P

More seriously, per international treaty, we can't land on any of the suspected water sites on Mars. Salon, IIRC, had something about this over the weekend.