The reviews are in *updates*

Clinton won with force, grace, and a little charm; Sanders was good in some spots (her email)  and not so much in others (guns), O'Malley had a good closing statement, Chafee -- a Vanderbilt heir -- questioned socialism, and Webb is by far the best Republican in the race.  By far. 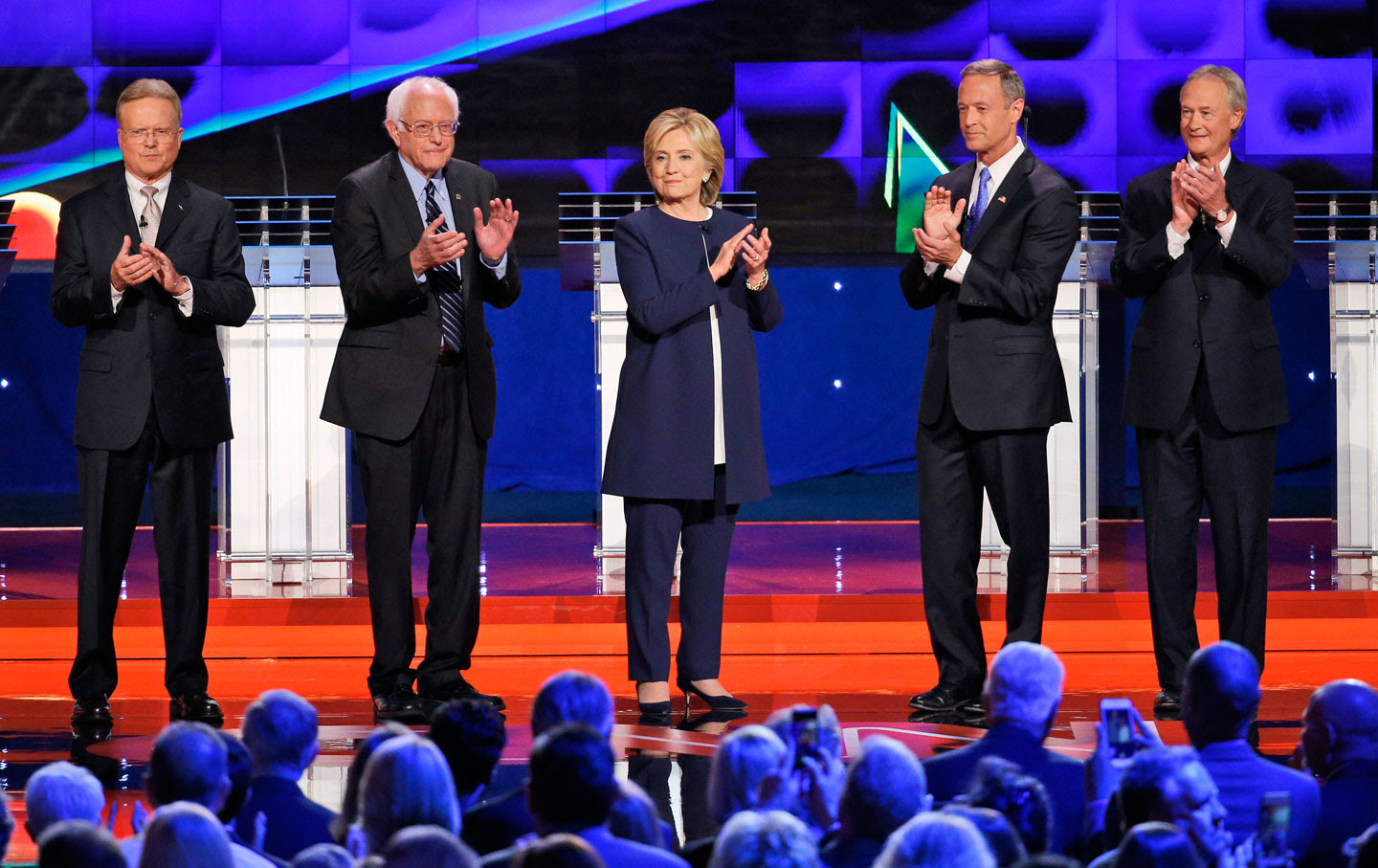 Prediction: if Clinton can hold her own against the rapidly crumbling Benghazi witch-hunters later this month, Joe Biden will not enter the race.

More from the NYT.

Bloggers, commentators and the Twitterati quickly weighed in on the first Democratic debate, scoring the winners and losers. Hillary Rodham Clinton was the clear victor, according to the opinion shapers in the political world (even conservative commentators).
Senator Bernie Sanders of Vermont won some points for his integrity, while the others — Martin O’Malley, the former governor of Maryland; Jim Webb, the former senator from Virginia and secretary of the Navy; and Lincoln Chafee, the former Rhode Island governor and senator — were mostly viewed as having missed their chance.
Some suggested that another loser was the man still deciding on whether to run, Vice President Joseph R. Biden Jr., as Mrs. Clinton appeared to be formidable. Others disagreed.

I really don't have anything to add.  The Republican responses, from Donald Trump to Mike Huckabee, were completely unhinged, somewhat more so than even I expected.  Their minions on Twitter likewise.   (Facebook is useless to me in this endeavor.)
AP fact-checked the debaters and found them lacking.  Just before the "festivities", as Wolf Blitzer called them, ABC/WaPo's poll found her solid among blue partisans and him (Sanders, the only guy worth mentioning from here on to 2016) growing among independents.  I think all of those constituencies strengthened after last night.
If you did not watch it -- or even if you did, uninterrupted by your party's guests yelling and cheering, or your social media timelines spinning like a penny slot machine -- this is the best review.  Update: Oh, and No More Mister Nice Blog, pretty much an echo of my thinking.
I'll have more later, tied into Clinton's Texas swing this week (she's in San Antonio tomorrow with her presumptive running mate).

Updates:  In the meantime...

-- From Vox: The revealing way the candidates spoke about Syria.  This excerpt:

(Her debate response) is consistent with Clinton's long-held interventionist approach to the world, which is generally more aggressive than what most Democratic voters are comfortable with.

You'd think that her chief rival, Bernie Sanders, would pounce on this. Yet Sanders didn't say much about her policy. His most direct hit was more tepid: "She is talking about, as I understand it, a no-fly zone in Syria, which I think is a very dangerous situation. Could lead to real problems."

On foreign policy, Sanders actually isn't that far to Clinton's left, and he is more in line with Obama. "I support air strikes in Syria and what the president is trying to do," he said during the debate. Indeed, if you look at his more extensive debate comments Syria policy answer, he basically called for what Obama is already doing...

-- Highlights and analysis above the live-blogging from the NYT and The Atlantic.
Posted by PDiddie at Wednesday, October 14, 2015

I am missing that name on my linkage. I see Alan Rappeport on the one you appear to be disliking, other bylines on other links, not Amy's.

My bad; I confused your link from The Hil with the one from the NYT. (The Hill is also wrong, though, of course.)

I just finished ripping that Hill piece in my debate post-mortem. If the "Denmark" comment on Sanders is serious analysis, then my left butt cheek is qualified to be POTUS.

Per a Tweet of mine, note that all the "inside the Beltway" or "inside the Mopac" pundits are saying Clinton won.

Doug ... Doug Henwood is a good left-lib, more left than me and prolly than you, too. He's also just as skeptical within his left-liberalism as am I.

He's an alt-media journalist, with especial expertise in finance. I think he was founder of the Left Business Observer (LBO). On radio, he hosts "Behind the News," a weekly radio show covering economics and politics on KPFA, Berkeley. The fact that he's on Pacifica should tell you enough, eh?