Reading the turnout tea leaves on the mayor's race

First, this hit my mailbox yesterday. 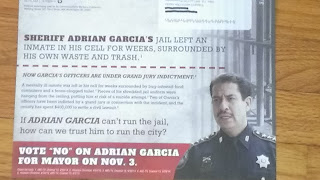 Campos has already whined about it, so I'm just posting to let him know that an English-speaking household received it.  As he notes, the CWA, whose name is on it as sender, is supporting Sylvester Turner, and the "Vote 'No' on Adrian Garcia" piece -- which for the record is not possible; one cannot 'no' on a mayoral candidate, only for some other one -- is indeed designed to do what Turner wants it to do.

"For me, it doesn’t matter who’s in second or third," Turner said after shaking hands at a retirement community on the city's southwest side. "My deal is on November the third, I want to make sure that we’re No. 1 and that No. 2 is so far behind that it really doesn’t matter."


He's not shaking off Bill King, however, and that's the fellow all the pundits are predicting will join the former state representative in the runoff, based on the surging early vote in certain parts of town.

"We're seeing heavy early voting turnout in places like the west side and Clear Lake (which are traditional Republican strongholds)," Stein said. "We're also seeing heavy early voting turnout in African-American precincts." [...] "I assume that's due to two things: the mayor's race where Sylvester Turner's a very prominent black (candidate) and a very large number of African Americans voting for controller and at large (council seats). So I think they're moving the early vote. Any candidate who knows who their base is likes to get their vote out early."


Why conservative black voters wouldn't be turning out for Ben Hall, who has sold himself as the candidate most strongly against HERO, is part of Stein's predictive analysis based on his previous poll -- which I castigated but which has been verified to some degree by later polling -- in which he raved about King's surge, and does so again.

Meanwhile, polling has indicated Republican voters have been breaking for King over Steve Costello, who's also angling for GOP votes. So a high turnout at traditionally Republican polling places like the Trini Mendenhall Sosa Center on Houston's west side, is good news for King, Stein said.

"There were so many undecided Republican voters who were breaking in our poll very clearly towards Bill King," Stein said. "That would be a real indication that he's likely to be in the runoff."


This is the safe bet (a black Democrat, long the front-runner by every measure, and a white Republican) and we'll just wait to see if these professional prognosticators are right.   I am hoping they are wrong, and so do the supporters of Costello and Garcia, too.  Both of those last two have had their troubles.

“No question, he simply failed to respond to this, and voters penalized him accordingly," said Bob Stein, a Rice University political scientist who predicted last week that Garcia would continue to be haunted by the slide through Election Day.

"... Costello, I think, is just not able to win support from the base Republican vote that's out there that he should have been able to win as a three-term incumbent councilmember."


Down the ballot, if King makes the runoff and you have two At Large Republicans -- Michael Kubosh and Jack Christie -- in runoffs with Democrats, that December dynamic (Turner vs. King) may help them stay in office.  Both may avoid the runoff altogether if HERO is indeed driving scads of fearful, angry conservatives to the polls.  If two Democrats -- Turner and Chris Bell, Turner and Garcia -- move on to the final round, then the fortunes of those two AL CMs change entirely; Republicans without a mayoral hopeful stay home for the holiday voting.  Those two races, AL 3 and AL 5, are what I'll watch on Election Night.  Their outcomes will determine whether Democrats have a good night or not (and we may be castigating liberal non-voters again on the morning after).

Who else is helped by continued strong turnout among white conservatives and African American voters?  Perhaps Chris Oliver in AL 1, Andrew Burks and Eric Dick in AL 2, and Laurie Robinson in AL 3 4, all with a measure of name recognition and some with elected experience.  Who's hurt?  Maybe the white progressives: Lane Lewis in AL 1, incumbent David Robinson in AL 2, Doug Peterson in AL 3, and even not-Caucasian Philippe Nassif in AL 5.  GOTV efforts need to be energized now for these campaigns.

Still, the electorate for Houston municipal contests has historically skewed old, white, and Democratic, so if there's any trend left to discern, it's whether that one holds or gets revised after this election.

Update II: An email from the Turner campaigns ups the ante.

More than 15,000 people who haven't voted in a mayoral election in years have already voted early in this election.

We don't know why they're voting this time around, but we do know that makes this election unpredictable.


They're zombies, and they're voting against HERO, because they don't like heroes of any kind.  So for God's sake, get out there and cancel them out -- I mean, their votes.
Posted by PDiddie at Tuesday, October 27, 2015