The Republican candidates for president will gather Wednesday for their third debate amid fresh volatility in an already chaotic race, with Ben Carson surging past Donald Trump in Iowa and one-time front-runner Jeb Bush under pressure to prove he's still a viable candidate for the GOP nomination.


We'll hope for fireworks, but the two guys going in opposite directions are pretty low energy.

The soft-spoken Carson has been a low-key presence in the first two GOP debates, but the retired neurosurgeon is likely to get more attention from moderators — as well as his fellow candidates — after a series of preference polls show him atop the field in Iowa.

Trump has already shown he's eager to take on Carson, jabbing him for his speaking style and raising questions about his Seventh Day Adventist faith.

"We'll see how Ben holds up to the scrutiny," Trump said Tuesday on MSNBC.

Meanwhile, Bush will be grasping for momentum after one of the most trying stretches of his White House campaign. Slower-than-expected fundraising has led Bush to slash spending and overhaul his campaign structure, and he's voiced frustration with the way the unusual race has progressed.

If the election is going to be about fighting to get nothing done, he says, "I don't want any part of it."

Early on in the campaign, he tapped his father's campaign finance network, and they gave ... but now, they've given to the limit, and he's not collecting new donors. The base of the party has turned its collective back on him. His cash flow is an ebb tide; in the third quarter fundraising period, he spent nearly as much as he took in, and has a pittance, given the realities of modern campaign financing, left on hand.


This is what happens you place too much emphasis on the viability of a candidate by virtue of how much in campaign funds they can raise.  Remember that the committee on endorsements for the HGLBT Caucus made this mistake, and was overruled by their membership.

On Friday - the news day when these people hope no one is looking - Bush announced a major evisceration of the campaign. Mass firings of staff members, and a 40 percent cut in payroll, including funds for travel ... and if you can't travel as a candidate, you're not a candidate; you're just a guy on TV with an exclamation point after your name on the campaign posters you can no longer afford to print.


Bush's fall is no surprise, and neither is Trump's, really.  That they are being eclipsed by a low-talking, sleepy-eyed, real black brain surgeon who seems blissfully unaware of Godwin's Law is. 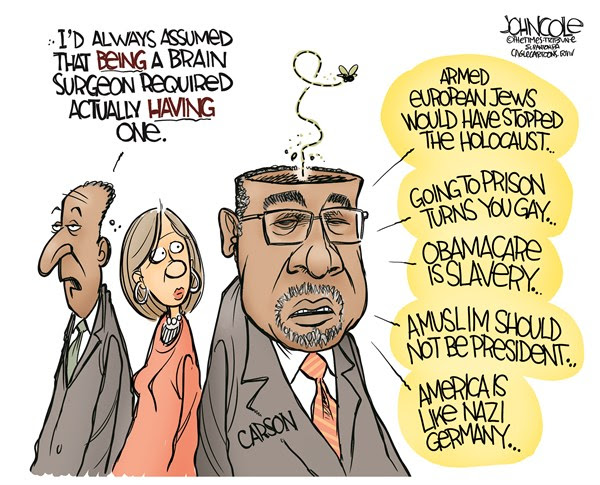 While Carson is unknown to many Americans, he's built a loyal following with tea party-aligned voters and religious conservatives. His campaign has started running new television advertisements in early voting states that center on his experience as a doctor and highlight his status as a political outsider.

Carson has raised eyebrows with his incendiary comments about Muslims and references to Nazis and slavery on the campaign trail, rhetoric he's made no apologies for. His standing in early states has only appeared to strengthen with each controversial comment.

Carson's biggest weakness may be his glaring lack of specific policy proposals. The issues listed on his campaign website are vague, including a tax plan that calls for a "fairer, simpler, and more equitable" system. On foreign policy, he's said, "all options should remain on the table when dealing with international bullies," such as Russian President Vladimir Putin.

Carson could be pushed Wednesday on domestic policy, with debate host CNBC promising to focus on economic issues, including taxes and job growth.


With Trump after him, with his fairly glaring lack of communication skills, I don't see this as being a good night for the doctor.  As usual I'll be watching Marco Rubio and Ted Cruz for their abilities to pick up the pieces from Carson, Trump, and Bush when it becomes more apparent that they are losing causes.  With respect to Rubio...

The Florida senator’s campaign high command probably couldn’t have planned their candidate’s trajectory to this point any better. Actually, they did plan it, and they’re right where they want to be: still out of the harsh spotlight that comes with being the frontrunner but right in striking distance as the race heads into the final three months before Iowa. Rubio’s formula for these debates is incredibly simple: deliver his talking points with ease and style, crack a few jokes and flash that easy grin, and avoid squabbles with other candidates. One problem this time: Jeb Bush may be looking for a fight.


With respect to Cruz...

Cruz has been waiting a long time now for Trump and Carson to implode so he can snatch up their supporters. He can wait a while longer. He’s got plenty of cash. But of anyone in the field, he has the greatest incentive to sow doubt among conservatives about Carson’s conservative credentials. Iowa is fertile ground for Cruz, and he won’t want Carson to get too much momentum there.


I won't care much what any of the rest do or say unless it's crazy enough to make social media waves, and I'll be watching a lot more of the second game of the World Series anyway.

Update: Here's the full schedule from Mediaite.
Posted by PDiddie at Wednesday, October 28, 2015