DisruptJ20 is my kinda people.  Wish I were younger and healthier and I'd be there with 'em.

At least two DC police officers and one other person were taken to the hospital after run-ins with protesters, DC Fire Spokesman Vito Maggiolo told CNN. Acting DC Police Chief Peter Newsham said the officers' injuries were considered minor and not life threatening.

Bursts of chaos erupted on 12th and K streets as black-clad "antifascist" protesters smashed storefronts and bus stops, hammered out the windows of a limousine and eventually launched rocks at a phalanx of police lined up in an eastbound crosswalk. Officers responded by launching smoke and flash-bang devices, which could be heard from blocks away, into the street to disperse the crowds.

"Pepper spray and other control devices were used to control the criminal actors and protect persons and property," police said.

Anti-Trump protests also broke out Friday in US cities, including New York, Seattle, Dallas, Chicago and Portland, Oregon. Authorities in Seattle say one person was in critical condition at a hospital with a gunshot wound. Demonstrations also took place overseas in Hong Kong, Berlin and London.

In case you were wondering, there's going to be a lot more of this.  (Watch how AG-designate Sessions handles it.  He's already got Justice backing off from voter/photo ID lawsuits.  Update: More in depth on that from ProPublica.)

I won't expect too many people who voted for Hillary Clinton to be a part of this action; today's Women's March is more their speed.  "The pussy grabs back" is today's campaign chant.

Hundreds of thousands of people in the United States and around the world are set to join marches Saturday to raise awareness of women's rights and other civil rights they fear could be under threat under Donald Trump's presidency.

The key focus of the day will be the Women's March on Washington, which organizers say could attract a quarter of a million participants.

The march, which began with a modest Facebook call in the aftermath of the election, has grown in to what could be one of the larger political demonstrations ever seen in DC. 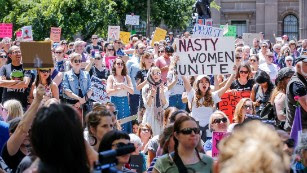 But there are also more than 600 "sister marches" planned around the country, with some of the biggest expected in Boston, New York, Chicago and Los Angeles.

And women and men in cities around the world -- including Sydney, Hong Kong, London and Paris -- are also marching in solidarity and in opposition to the values they think President Trump represents.


And all across Texas, as posted yesterday.

You're released from yesterday's media blackout to tune in to the demonstrations if you can't do anything more, but keep avoiding teevee coverage of President Twitler wherever possible. Concentrations of Trump, televised, is how we got here in the first place.  Don't continue to enable a media that wants to treat this administration as normal.   And punch a Nazi every chance you get.  Zero tolerance for fascism is a great way to resist.
Posted by PDiddie at Saturday, January 21, 2017