Scattershooting the state budget, the potty bill, and a few Democrats

-- The Texas House and Senate have submitted their preliminary budgets, and they're billions of dollars apart.  The Statesman says over $5 billion after the wash, the TexTrib and the Chron are going with $8 billion.  This is illustrative of the dilemma facing those of us who want to better understand these things; details are scant on some of the largest expenditures, but it's enough to conclude that state services are going to get a lot worse.  One bright spot I can find is that the House does not declare the economic stabilization account, aka rainy day funds, untouchable.

"It was designed to accommodate these times that we're in right now," Darby said of the fund at a panel discussion at a conference hosted by the Texas Association of Business. "It has been raided and reduced to near zero three times in the past."


This is more open-minded thinking than I can recall seeing, particularly from members of the Texas House, and suggests that their influence will be greater than the Senate's, which has gone too far right to be of much service to any proud Texan. 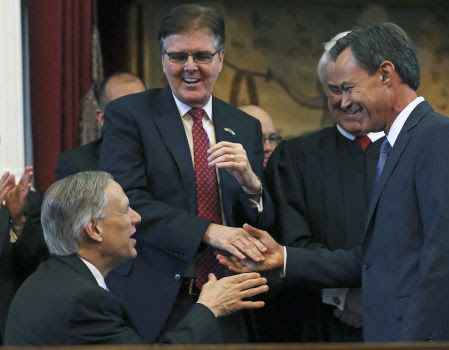 -- Related to that premise, Joe Straus is going to push on Greg Abbott to take his side -- and not Piss Lord Dan Patrick's -- on the bathroom bill.  Bold emphasis mine.

House Speaker Joe Straus, R- San Antonio, was wary of the Senate’s “bathroom bill” during a speech at the Texas Association of Business conference on Wednesday, sharing his personal opinion that Senate Bill 6 could result in economic troubles.

“There’s been a lot of work put into our state’s economic success,” Straus said. “Contrary to popular myth, it is not a miracle. We want to continue that success and we want Texas to keep attracting the best and the brightest. One way to maintain our economic edge is to send the right signals about who we are.”

The speaker also appeared to be interested in getting a real stance on the issue from Gov. Greg Abbott, saying “the governor’s opinion on this can make a big difference too.”

“If you are concerned, and I know many of you are, now is the time to speak up,” Straus said, addressing conference attendees.


I say we all try to knock the guy in the wheelchair off that fence he's straddling.

A state district judge in Austin has taken the next step in dissolving the American Phoenix Foundation, the group that 'terrorized' members of the Legislature last session by secretly, then not-so-secretly, filming them at the Texas Capitol and elsewhere in Austin.

Former state Sen. Dan Shelley has been appointed as receiver to take over and dissolve the foundation, which has been described by its founder Joe Basel as “defunct.”

(Many QR readers may remember that Sen. Shelley served in both chambers and was legislative liaison to the legislature for both governors George W. Bush and Rick Perry.)

"The appointment of a receiver is an extraordinary remedy applied only because Joe Basel abused a nonprofit as if it were his personal play thing," said Steve Bresnen, the veteran lobbyist who filed suit to bring the finances of the Phoenix Foundation into the light.


Scott Braddock, the author of this excerpt, is simply a terrible writer -- too many quote marks and far too much inappropriate capitalization -- so I took the liberty to edit him above in that regard.  But to his credit, he appears to be the only reporter who covered this story.  It was ten days ago that the court squashed American Phoenix to death, and my Google machine shows no other stories about it.

-- As I posted earlier last week, memes are fun, get a lot of action on social media, and are rarely fact-checked.  But the fact-checkers make their their own mistakes, too.  It's getting more difficult to discern fake news from non-fake news, and the best thing you can do is to set your BS detector to 'highest', and wait for the autopsy results.

I remain of the opinion that Cory Booker is a POS neoliberal.

(Outgoing) Labor Secretary Tom Perez, one of the leading candidates for chair of the Democratic National Committee, has stumbled in recent days when asked about his position on money in politics.

Asked at a DNC forum in Phoenix last Saturday whether he will “revive President Obama’s ban on corporate donations to the DNC” and a ban on appointing lobbyists as party leaders, Perez demurred.

“It’s actually not that simple a question,” Perez responded, adding that such a move might have “unintended consequences.” Perez argued that such a ban might impact “union members who are lobbyists,” though the question explicitly only addressed corporate lobbyists.

Speaking to the Huffington Post, Perez has refused to clarify his position on resurrecting President Obama’s ban on lobbyist donations to the DNC, which was overturned by former DNC Chair Rep. Debbie Wasserman Schultz, D-Fla., during Hillary Clinton’s bid for the presidency.

The only firm restriction on special-interest money Perez has announced is that he will not accept lobbyist donations for his own campaign committee formed to support his bid for DNC chair. But even this position has come under question.

You're right indeed about Braddock as a writer.