In the aftermath of Trump's Muslim ban

Kevin Drum has missed more often than he's made over the past year or so, but he strikes this one dead solid perfect.  Opening with an excerpt:

The President’s team had months to prepare this signature immigration initiative. And they produced...an amateurish, politically self-immolating effort that humiliated the country, provoked international retaliation, and failed to withstand the obvious federal court challenge on its very first day.

Given the despicable nature of this effort, I’m happy it has become a political fiasco. It also makes me wonder how the Trump administration will execute the basic functions of government. This astonishing failure reflects our new President’s contempt for the basic craft of government.


This sure seems to be the case. For the barely believable story of just how incompetent the whole exercise was, check out this CNN story. It will leave your jaw on the floor. And yet, there's also one tidbit that makes me wonder if the chaos attending the rollout was quite as unintended as we think:

Friday night, DHS arrived at the legal interpretation that the executive order restrictions applying to seven countries — Iran, Iraq, Libya, Somalia, Syria, Sudan and Yemen — did not apply to people who with lawful permanent residence, generally referred to as green card holders.

The White House overruled that guidance overnight, according to officials familiar with the rollout. That order came from the President's inner circle, led by Stephen Miller and Steve Bannon. Their decision held that, on a case by case basis, DHS could allow green card holders to enter the US.


The decision to apply the executive order to green card holders, including those in transit, is almost insane. Whatever else he is, Steve Bannon is a smart guy, and he had to know that this would produce turmoil at airports around the country and widespread condemnation from the press.

Why would he do this? 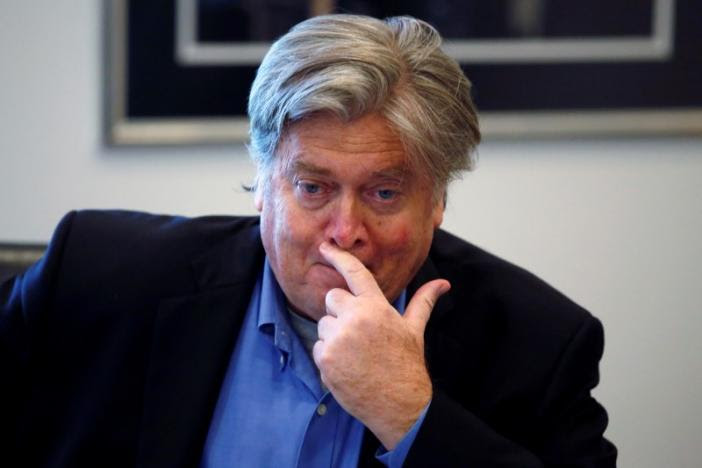 I'll answer that (first, with respect to Trump): In addition to being a racist, a misogynist, and a sexual fetishist, our new president has now revealed himself to be a sadist.  Update: This is not hyperbole, not exaggeration.  Sadist.

"It’s working out very nicely,” (Trump) said on Saturday afternoon as he signed his latest batch of executive actions. “You see it in the airports.”


Bannon, for his part, is both Neo-Nazi and nihilist.


In cases like this, the smart money is usually on incompetence, not malice. But this looks more like deliberate malice to me. Bannon wanted turmoil and condemnation. He wanted this executive order to get as much publicity as possible. He wanted the ACLU involved. He thinks this will be a PR win.

Liberals think the same thing. All the protests, the court judgments, the press coverage: this is something that will make middle America understand just what Trump is really all about. And once they figure it out, they'll turn on him.


This is indeed chaos theory as applied to governance.  While the media's attention was focused on the protests, Bannon was appointed to the National Security Council (along with Trump's son-in-law Jared Kushner and chief of staff Reince Priebus), replacing the Director of National Intelligence and the chairman of the Joint Chiefs of Staff.

That is some kind of hubris.  I'd say we're now headed pell-mell toward both a civil war and a nuclear war -- remember, the North Koreans have been bragging about their new missile and restarting their reactor -- and the reaction from the Chinese seems to be "let's get it started".

Enjoy the rest of your weekend!  There may not be many more in our future!
Posted by PDiddie at Sunday, January 29, 2017