Betsy DeVos: worse than we thought 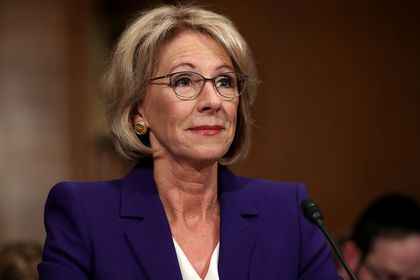 "Dodges Questions" seemed to be the most common description.

-- On campus sexual assault guidelines (also referred to as Title IX) she was noncommittal.

The guidance, which expanded gender discrimination protections on campus to sexual assault and sexual violence survivors, requires every school to have an established internal procedure to handle allegations of sexual harassment and sexual violence. It also says that every time a complaint is filed the school must promptly investigate it, independent of whether or not the crime is reported to the police.

When asked about the guidance by Sen. Bob Casey (D-PA), DeVos said that she was aware of many “conflicting ideas and opinions around that guidance.”

Much to the chagrin of the survivors in the audience, when further pressed about whether or not she would commit to upholding the guidance, DeVos hedged.

“It would be premature for me to do that today,” she told Casey.


Why in the world would that be?

DeVos has a documented history of donating money to the Foundation for Individual Rights in Education (FIRE), a group that has opposed legislation aimed at preventing campus sexual assault and even provides legal counsel to students under investigation for sexual assault.

And, to perhaps state the obvious, she also feels comfortable serving under President-elect Donald Trump, who has been accused of sexual assault and sexual harassment many times and even infamously bragged on tape about sexually assaulting women. Later in the hearing, Sen. Patty Murray (D-WA) asked DeVos specifically about that Access Hollywood tape, and DeVos confirmed that if Trump performed the actions he bragged about — kissing and groping women without their consent — in a school setting, she would consider it sexual assault.


Yeah, on the same day Trump was sued by one of his former Apprentices for calling her a liar about his sexual advances toward her.  That's a tangent we'll leave for another day.

-- DeVos may have dodged the tough questions, but she was also wrong on the easy ones.


Sen. Al Franken asked DeVos to explain her thinking on whether test scores should be used to measure students’ proficiency or their growth. That’s an important, and basic, difference because it affects how schools are labeled as succeeding or failing.

But DeVos had no idea what Franken was talking about.

“I think if I am understanding your question correctly around proficiency, I would correlate it to competency and mastery, so each student according to the advancements they are making in each subject area,” she said to Franken.

“That’s growth,” Franken retorted, correctly. “That’s not proficiency.” By the time DeVos understood Franken’s question, she had no time left to answer.

This wasn’t just a matter of mixing up some jargon. DeVos’s response, as well as her reactions to similar questions about the basics of federal education policy, suggested she knows little about what the department she hopes to lead actually does.

Sen. Lamar Alexander of Tennessee, the committee chairman responsible for shepherding DeVos past these hazards, has severely limited the questioning.  Because the more you get to know her, the less you're going to like her.  The same holds true of her financial disclosures, which were incomplete at the time of this hearing.

(T)he fact that Democrats are protesting that their questions were cut short and that they're still waiting for DeVos to clear her required ethics review feeds into their larger narrative that Republicans are ramming through Trump’s nominees without properly vetting them.

Senate Minority Leader Chuck Schumer complained on the Senate floor that the DeVos hearing is “a mockery of the process.”


-- Then there's the outright lies.

Having no experience in public education (DeVos is a conservative billionaire who sends her children to religious private schools), it was up to her to at least prove she was prepared. She wasn’t. And she fell flat on her face in a cringe-worthy session that even Republicans struggled to defend.

At one of her lowest points, DeVos found herself defending Trump’s plan to allow guns in schools by suggesting that they are sometimes used to defend children from grizzly bears.

“I will refer back to Senator (Mike) Enzi and the school he was talking about in Wyoming ... I would imagine that there is probably a gun in the schools to protect from potential grizzlies.”

As Mic.com reported, a Wyoming teacher was adamant that it is not school policy to keep guns on the premises to fend off bears.

Audra Morrow, a teacher at Wyoming’s Valley Elementary School from 2004 to 2006, explained to Mic that no guns were necessary to ward off ursids, and that the fence and bear spray were “absolutely” sufficient measures on their own.

“No firearms in our schools!” Morrow wrote. “We do have bear spray but have never had a problem that would require using it.”


The number of bear attacks in North America is 3 deaths per year -- none on school grounds. By contrast, there were over 200 school shootings in the United States in the last 3 years. Bears aren’t the problem, but the right to bear arms may be.

It’s important to remember that DeVos’s comment isn’t just a gaffe, it was a deliberate response meant to justify an unjustifiable position. Having no legitimate defense of Trump’s dangerous plan to remove gun-free zones on day one of his presidency, she fabricated bear attacks.


Appointing people to cabinet level positions who have no experience whatsover in the field is apparently what 'shaking up Washington' looks like.  But as Bernie Sanders pointed out, DeVos' main qualifications for the job are that she and her family have donated somewhere in the neighborhood of $200 million to Republican candidates.

“My question is, and I don’t mean to be rude, but do you think if you were not a multi-billionaire, if your family had not made hundreds of millions of dollars of contributions to the Republican Party, that you would be sitting here today?”


She says yes; the rest of us doubt it.  DeVos is correct, though about her political contributions.

“My family is the biggest contributor of soft money to the Republican National Committee,” she wrote in Roll Call in 1997. “I have decided to stop taking offense at the suggestion that we are buying influence. Now I simply concede the point. They are right. We do expect something in return. We expect to foster a conservative governing philosophy consisting of limited government and respect for traditional American virtues. We expect a return on our investment.”