Democrats are going to need a better plan than this toon represents.  The week's blog post roundup gathers the best from last week to start your 2017 off on the right (left) foot. 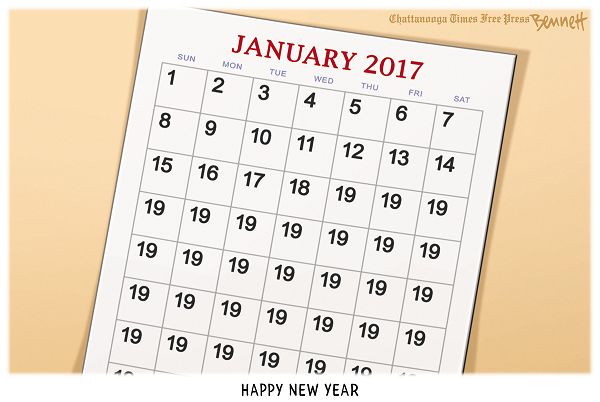 Off the Kuff pointed to Brazoria County as a potential and necessary opportunity for Greater Houston Democrats going forward.

Texas Republicans expose themselves by making the lives of women, children, and prisoners as miserable as possible. CouldBeTrue of South Texas Chisme sees Donald Trump is not the only white nationalist.

The Brainiacs of 2016, formerly the TPA's Texan of the Year and awarded solely by PDiddie at Brains and Eggs, are The Democrats.

The Apache oil company's "generosity" and speaking with forked tongue caught up with them in regard to their fracking plans in Balmorhea, as detailed by Txsharon at Bluedaze.

In a welcome relief from charting polls and stockpiling objections to Trump, jobsanger posts a survey of the most dangerous drivers in the United States, and finds Texas is tied for first -- or worst -- with Louisiana.

Neil at All People Have Value took a picture of train tracks at a Houston light rail station.  APHV is part of NeilAquino.com.

Dos Centavos listed his top-trafficked posts for the year.

And in Lewisville, vandals shot through a homeowner's windows and knocked the head off of his front-yard Santa Claus, reports the Texan-Journal.

More of the best of the left of Texas from the end of last year!

Leah Binkovitz at the Urban Edge has a rundown of the bills that have been filed to date for the coming legislative session (opening on January 10).  And Ross Ramsey at the Texas Tribune perceives that Austin and Washington out of sync in the early transitioning.

The Houston Press follows up on the Blue Bell ice cream company's continuing troubles with listeria, speaking with a food safety litigator who suggests the company is foolishly requesting of federal authorities that they be allowed to abandon the stringent -- and expensive -- poisonous bacteria testing imposed after previous tragedies.

Grits for Breakfast says the top criminal justice story in Texas -- and possibly the United States -- from last year is easy to spot, but the rest are more obscure.

Members of Austin Jewish Voice for Peace held an ecumenical Chanukah vigil at the Capitol, and the The Rag Blog has the photos and story.

The Bloggess eulogized Carrie Fisher as an inspiration to people who struggle with mental illness.

The Great God Pan Is Dead highlighted the art that moved him in the past year.

Swamplot presented its annual awards for real estate in Houston.

And 2016 was the year that Pages of Victory decided had weaned him off the Democrats.
Posted by PDiddie at Monday, January 02, 2017