I mentioned a few days ago that Twitler's chances of being impeached in the next six months were too short for my liking, but these bets are ... creative.  I'll give you my wagers at the end.  From the e-inbox:

(19 January 2017) History will be made tomorrow, as Donald Trump is inaugurated as the 45th President of the United States.

Mischievous bookmaker Paddy Power have priced up a variety of specials for the Washington event – including what colour the new President will be at his inauguration. The bookie makes lighter tones Tiger’s Eye and Deep Saffron its 6/1 favourites with Mango Tango leading the chasing pack at 7/1. Further down in the betting is Vivid Tangelo and Cool Copper at 8/1 while Mahogany props up the betting at 18/1. 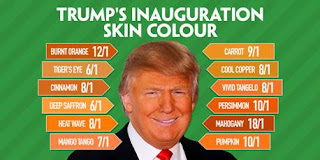 And Farage is also prominent in the market for which celebrities will be in attendance. The UKIP leader is a short price to be at the inauguration (2/1). Noted supporter Kanye West (3/1), madcap wrestler Hulk Hogan (3/1) and Dennis Rodman (10/3) are also in contention – as well as loud-mouth pal Piers Morgan (12/1).

However, the party could be short-lived – with the bookie offering odds of 4/1 that Trump is impeached within six months of his presidency.

Féilim Mac An Iomaire, a spokesperson for Paddy Power, said: “Donald Trump’s election led to our biggest political payout in our history and we very much doubt that he’s done with upsetting the odds just yet. His inauguration will be watched all around the world and we make it 6/1 for the States to follow up its first-ever black President with its first-ever deep saffron Commander and Chief. (sic)”


What Phrase Will Trump Use First?

Who Will Be In Attendance?

9/1 Melania to wear a golden dress


I'm not taking any of the skin tones; too subjective.  Remember that television distorts, and my teevee's color settings are probably different than the Irishmen's.  But two-to-one on MAGA is as sure a moneymaker as they come.  I'd again pass on the rest of those phrases in this speech (but the SOTU, even a year from now?  Alas, a different sport).

Take that 6/1 on Jon Voight and walk to the bank.  Update: Hope you got your bet in; a quick $300 bucks here.  Bernie Sanders at 50-1 is easy money, too (scroll to the bottom there; this is where PP fails on handicapping US politics.  Hope they don't read this blog).  Skip the rest.