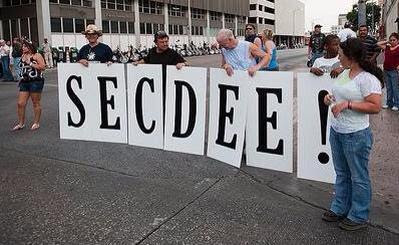 How many delegates do you think pronounced it suck-cession?  Astoundingly, as Bud Kennedy recounts, they applied some forethought and decided it wasn't a good idea.

With the spirit of Texas President Sam Houston over the room, state party executives voted Saturday in Austin not to poll March primary voters on declaring Texas independence.

Austin Republican Mike Goldman’s voice rose as he quoted Houston’s opposition to Confederate secession and implored the party’s state committee to avert “brother fighting brother on whether they are a Texan first or an American first.”

More immediately, the vote averted a national embarrassment with implications both in March and November.

If the party had a poll on secession, that would have drawn more disenchanted independents who also support Donald Trump. (Even the Houston-area Tea Party activists behind the idea said it’d draw new voters.) That would have hindered U.S. Sen. Ted Cruz’s shot at claiming more Texas delegates.


So this essentially came down to a resolution failing to get on the ballot -- which supporters believed would attract new voters to their primary -- because it might hurt the prospects of their favorite son, and make the party look like a sea-to-shining sea joke.  (Clue to Texas Republicans: that ship sailed years ago.)

Then, if the referendum passed and Cruz were on the ticket, can you imagine the campaign? “Why vote for a Texas Republican? They don’t even want to stay in the Union.”

Since 1861, Texas secession has always been a farcical idea promoted by liars, self-important patriots and greedy merchandise peddlers. This year, it just happens to be a particularly self-destructive idea for Republicans, which must be why the Tea Party party-wreckers brought it up.


There was an interesting article recently that suggested the Tea Bags, while losing favor overall, still have cracking up the GOP in mind.  Psychologically, they've already quit on the party, they just haven't filed the divorce paperwork.  While I found that premise somewhat intriguing, it seems more likely to me that they -- with Trump as their tool -- will actually take over the GOP and push out the moderates, who are hesitant emotionally or physically to disconnect.  Is Lindsey Graham correct in saying that nominating Donald Trump means the end of the GOP as we know it?

Are they at risk of becoming 21st century American fascists?

Honestly I'm more focused on seeing if Hillarians are going to be successful in driving out the Sandernistas.  Democrats, after all, have repeatedly demonstrated a propensity not to vote if the candidate nominated does not enthuse them enough to do so.  This is so obviously the difference between Hillary and Bernie that I am almost surprised that so many Democrats do not get it.

If I'm right about this trend, Trump could get elected president.

Mark this post as the first time I have publicly entertained the possibility that Clinton loses in 2016.
Posted by PDiddie at Sunday, December 06, 2015

This is another argument for parliamentary government. The Tea Baggers, if they got tired of the GOP, could join the Constitutionalist party. (Of course, they can now, for that matter.)