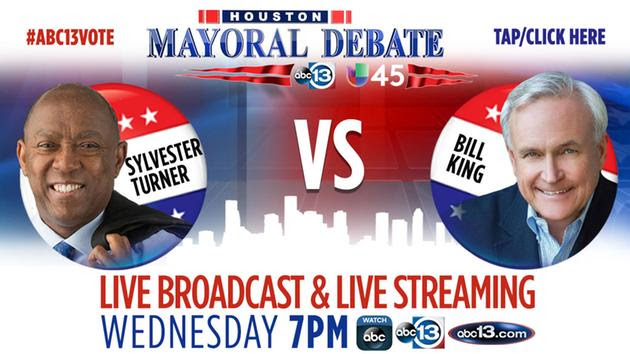 There was also one last night, which I skipped, and two more after tonight, one of which has been previously advanced.

Univision 45/KXLN-TV and ABC-13/KTRK-TV have joined to co-host the Houston Mayoral Debate, streaming it live from the University of Houston-Downtown at One Main Street, Houston, Texas at 7:00 p.m. on Wednesday, December 2nd. The Houston Mayoral Debate will feature runoff candidates Bill King and Sylvester Turner and will be accessible live on-air on KTRK-TV abc13 and online at www.abc13.com and www.univision45.com. Simultaneous Spanish-language translation will be available on Univision 45's website and will air the same day at 10 p.m. The debate will be presented in partnership with the University of Houston-Downtown and Mi Familia Vota.


Univision is the most-watched television network in Houston. How's the ad rotation between King and Turner over there?  Anybody who knows want to say?

ABC-13's Erik Barajas and Univision 45's Rebecca Suarez will moderate the debate. The audience will be by invitation only; however, Houston voters are encouraged to submit their questions in English or Spanish by posting them to twitter using #ABC13VOTE.


In other election news... 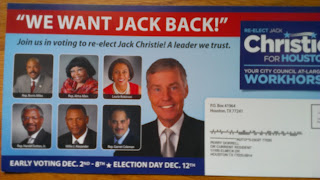 That's my state representative, Borris Miles, in the top left corner.  Next to him is Dr. Alma Allen and former council contender Laurie Robinson, and the bottom row, left to right, is Harold Dutton, Willie Alexander, and Garnet Coleman.  Former Texpatriate blogger Noah Horwitz, whose father challenged Christie in 2013, also declared on his FB page that he was voting for Christie.

These are Democrats -- some of whom allege themselves to be 'progressive' -- recommending a vote for a conservative Republican who stands firm against influenza vaccines, saying "you don't die from the flu".  (In the United States of America, the number of deaths from the flu -- not complications from it but the illness itself -- is a number estimated to be between a few hundred to a few thousand annually.  Most are children or elderly who don't receive the vaccine.  Christie was the only 'no' on city council two years ago to accept federal dollars for flu shots for Houstonians.)

Yes, it is accurate to say that Sharon Moses, the so-called Democrat in the runoff against Christie, sucks.  But she doesn't suck so hard that you should be voting for this. fucking. guy.  That makes you a moron, not a lofty non-partisan.

Your best vote other than nobody in this race is to write in Cthulhu, the least worst of three evils.

This is the dumbest thing I have seen a bunch of local Democrats do yet.
Posted by PDiddie at Wednesday, December 02, 2015

I'd write in you, instead Cthulhu, were I in Houston. ;)